Fuad Hussein, in an exclusive interview with Al-Monitor, says Iraq continues to play a role in helping to facilitate dialogue, and de-escalating conflict, between Washington and Tehran. 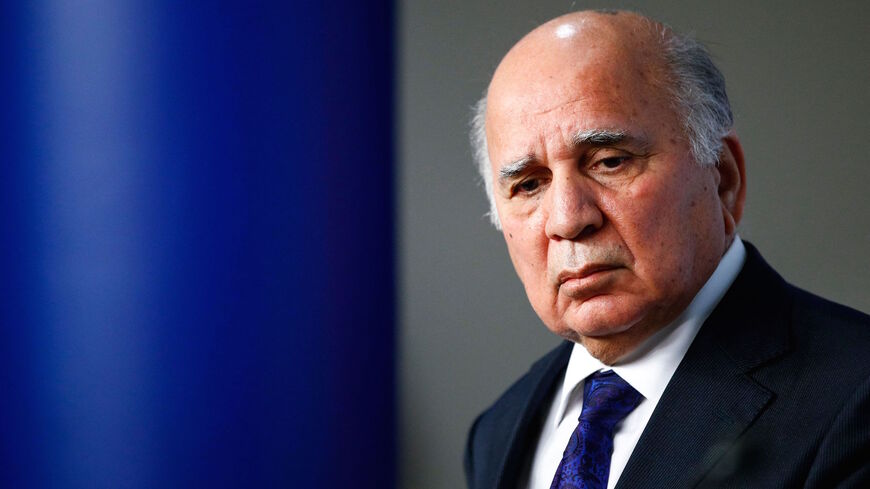 DOHA — Iraqi Foreign Minister Fuad Hussein, in an exclusive interview with Al-Monitor’s Andrew Parasiliti on the sidelines of the Doha Forum, says an Iranian nuclear deal is in Iraq’s interest.

"It is true that the Iranian minister [Foreign Minister Hossein Amir Abdollahian] called me and he mentioned that they had reached the last stage of the negotiations" in Vienna on the Joint Comprehensive Plan of Action, said Hussein.

Asked about what role Iraq can play in diplomacy between the US and Iran, Hussein said that "we are on good terms, and in contact with both sides. In fact, from the beginning of the negotiations until now … they have been talking about the process of the negotiation with us, and sometimes we are trying to get messages between the Americans and the Iranians."

A revived Iran nuclear deal would reduce tension internally in Iraq and in the region, he said.

"Conflict between Washington and Iran reflects itself on Iraqi soil. As a result, we are paying the price," added Hussein.

Before his appointment as foreign minister in 2020, Hussein served as deputy prime minister for economic affairs and minister of finance from 2018 to 2020, and has held a number of executive positions and senior appointments in the Kurdistan Regional Government. He was chief of staff to the Kurdistan Region Presidency with a rank of a minister, and a member of the cabinet from July 2005 to September 2018.

The Iranian missile attack on Erbil, the Kurdistan Region capital on March 13, was likely not connected to the Vienna talks or other regional issues, said Hussein.

Iraq, which lodged a formal protest to Iran over the attack, is conducting its own investigation. Once completed, "then we will have the discussion," said Hussein.

Hussein said he doesn’t know whether Iraqi parties can form a new government based on elections held in October 2019. Iraqi elections were held in October 2021, but the government formation process has been stalemated. Much will depend on whether the Iraqi Council of Representatives, or parliament, can assemble a two-thirds quorum on Saturday, March 26 to elect a president. If not, Hussein says, it is unclear whether the next government will be decided by the parliament or the Federal Court.

Asked about the impact of the Russia-Ukraine war on Iraq and the region, Hussein said: "Iraq is against war, and against sanctions, because we suffered from both."

Iraq may be an oil country, he said, "but we are going to import inflation from European countries," adding that the effects on all countries, especially emerging economies, will be severe.

Iraq will be part of an Arab League Contact Group for dialogue with Russia and other world powers to help resolve the conflict.

With regard to Iraq’s relationship to regional and international politics and crises, the foreign minister said that "other neighboring countries can influence our politics, so to manage crises internally, we are obliged to manage crises outside" Iraq’s borders.

Hussein noted that Iraq has given priority to good relations with all of the Arab Gulf countries, and he looks forward to the opportunities for dialogue at the Doha Forum.