On International Women's Day, Turks march in solidarity with Ukrainians

Women gathered in Istanbul and other cities for the Feminist Night Walk despite bans and demonstrators taken into custody, calling for the reinstatement of the landmark UN accord on violence against women. 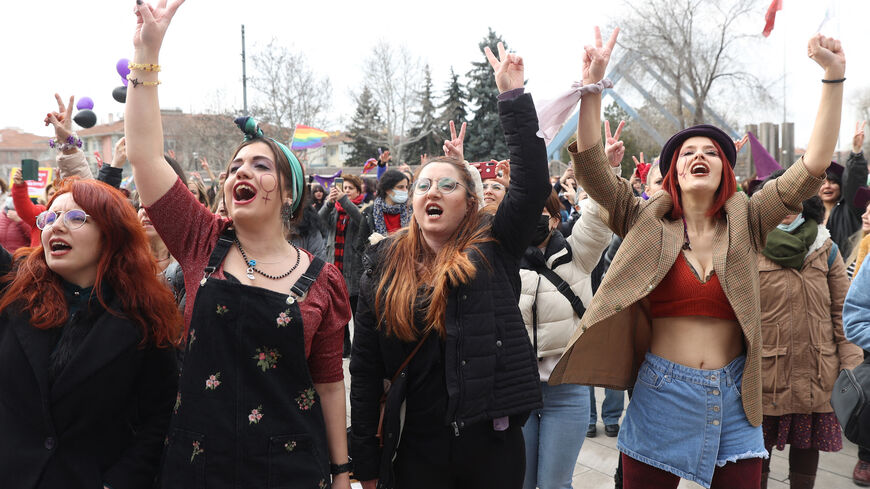 Women gesture as they take part in a protest ahead of International Women's Day on Sakarya Street in Ankara on March 6, 2022. - ADEM ALTAN/AFP via Getty Images

Thousands of women across Turkey took to the streets in big and small demonstrations from Sunday to today, International Women's Day, demanding gender equality and protection against domestic violence. The demonstrators added a new item to their list this year: solidarity with Ukrainian women.

"We are here to say no to war. Thousands of Ukrainian women and children have become homeless. They are the first victims of war. [Women] not only face violence but become the targets of sexist discourse," said Nazan Karacabey, spokesperson for the Ankara Women's Platform, which held a demonstration in the capital Sunday.

The platform's reference to "sexist discourse" referred to coarse jokes about "welcoming" Ukrainian women refugees on Turkish-language social media. TikTok clips, social media comments and even online news stories have shown Ukrainian women in sexy poses or extended cheeky invitations to host them, drawing the ire of Turkish women's groups and several celebrities. "Shame on those men who look at photos of displaced or wounded women and see them as sexual objects," tweeted actor Sahan Gokbahar. "Anyone who does that is an ignorant scum without a heart and a conscience." Ukrainian women in Turkey who have staged small-scale protests against the Russian invasion of their country in Istanbul and Antalya have also spoken out against the offensive remarks.

"The sexist remarks about Ukrainian women are not only made by men on the street but academics commenting on the Ukraine crisis or journalists," who have reported that these women have left behind their husbands and ran off. The commentary has outraged both feminist groups and a grassroots upswell of women, said Itir Bagdadi, a feminist scholar and one of the organizers of the Women's Night Walk in Balcova, in the Aegean portal city of Izmir. "In this year's marches, we see many messages calling for peace and solidarity with victims of war."

Two days before March 8, Turkey's First Lady Emine Erdogan published an open letter to her Ukrainian counterpart Olena Zelensky. "My beloved friend Olena and the dear people of Ukraine, I convey to you the most sincere love and respect of the Turkish people," Erdogan wrote, underlining that Turkey is home to 4 million Syrians who have fled the war. "Based on first-hand experience, we know that women and children, the most vulnerable group, are disproportionately affected by wars … I wish countries to overcome their problems through diplomacy, not through conflicts," read the letter, echoing the central theme of her husband's phone conversation with his Russian counterpart Vladimir Putin Sunday evening. On March 10, the foreign ministers of Turkey, Ukraine and Russia will come together for a tripartite meeting at the sidelines of the Antalya Diplomacy Forum.

Alongside slogans against the war in Ukraine and economic inequality — exacerbated by deepening financial crisis in the country — femicides and other violence against women remained at the top of the groups' agenda in the March 8 events this year. The focus is in part due to President Recep Tayyip Erdogan’s withdrawal from the Istanbul Convention, a pan-European anti-violence accord, with an overnight presidential decision on March 20, 2021. The withdrawal from the agreement that bears the name of Turkey's largest city sparked protests at home and abroad throughout last year. Washington and various European capitals have called on Turkey to reconsider the decision. Two opposition parties have pledged to reinstate the accord if they win the 2023 elections.

"The withdrawal has made Turkish women feel insecure and has encouraged many men in violent acts against women," Feride Acar, who was one of the key figures in the drafting of the convention, told Al-Monitor. In the last 12 months, 277 women have been official victims of femicides in addition to 247 "suspicious deaths" — meaning accidents and suicides that may be femicides covered up by the perpetrator or the family, a spokesperson for We Will Stop Femicides Platform told Al-Monitor.

Erdogan, who had pledged that Turkey would come up with its own national program to combat domestic violence, announced Friday new judicial reforms to increase prison terms for crimes against women. He said the perpetrators of willful killing and ill-treatment of spouses or former spouses could not see their sentences reduced under the new laws. The move aims to address one of the most significant demands from women's rights groups, who complain that abusers can get lighter sentences when they display good behavior during the trial — by as little as wearing a tie and a decent suit. Another critical point of the new package is assigning free legal counsel for women on a 24/7 helpline.

"A 24/7 hotline devoted solely to the victims of domestic abuse was part of the Istanbul Convention, which Turkey did not carry out," Acar recalled. "What we need in fighting gender-based violence is not more laws, but the meticulous interpretation of existing laws in line with international standards."

In Istanbul, the governor's office announced Monday that it would not allow the Feminist Night March — the largest of all the Mrch 8 events — to enter Istanbul's central Taksim Square, the scene of the 2013 Gezi Park protests that momentarily shook the Erdogan government before being brutally suppressed. Since then, the governor's office has banned demonstrations in this symbolic venue, putting up metal fences around the square, closing down the metro and diverting other public transportation.

The coordinating March 8 Walk Platform brushed off the ban. "We've held that walk for 19 years, and we will not refrain on our 20th anniversary," the platform tweeted with a photo of last year's huge parade and images of gathering demonstrators Tuesday. "If you block the metro, we'll walk!"

The platform also announced that 38 demonstrators had been taken into custody as they made their way to the square.

The pro-Kurdish People's Democratic Party, which has the highest number of female deputies in parliament, announced that it had dedicated this year's events to the memory of Deniz Poyraz. Poyraz, a young female volunteer, was brutally killed in June by a gunman who attacked the party's headquarters to kill everyone there.

In Izmir, the scholar Bagdadi told Al-Monitor that the key demands of women were visible at the make-your-own-banner workshops in Balcova. "Hands Off My Olive Grove," read one banner, referring to recent legislation that opened up olive groves to mining. "Every time I try being virtuous, I start laughing and give up," read another, mocking statements from the conservative ruling party's bigwigs and cronies calling on women to be modest. Some marchers carried banners about Turkey's economic conditions and the gender pay gap — a point raised by the United Nations Development Programme (UNDP) as Turkey's  Achilles' heel in gender disparity.

"Turkey has a lot of catching up to do on gender equality," UNDP resident representative Louisa Vinton was quoted as saying of a study published by the UNDP last week. The analysis, which assessed Turkey's Gender Equality Performance from 2000 to 2019, found that Turkey's performance on gender equality fell short of other countries at similar levels of development and pointed at education and income as critical areas of concern. It also noted the low participation of women in political decision-making. "The ratio of women in the parliament [17.4%] is lower than all country groups, across all different human development levels," it said.