Striking a different tone from many of his Western counterparts, the Turkish president’s remarks in Kyiv reflect a position that factors in Moscow’s demands on the Ukraine standoff. 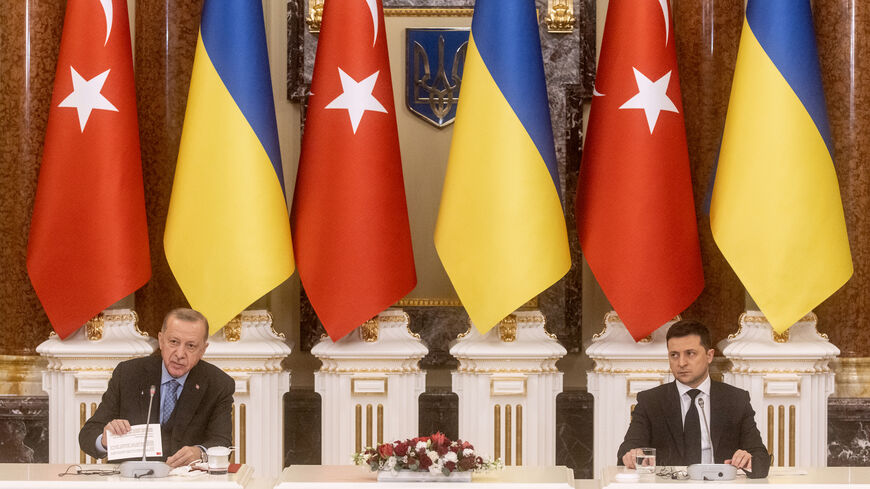 Turkey’s President Recep Tayyip Erdogan underscored the role of existing agreements for a “peaceful and diplomatic solution” in the Ukraine standoff during his visit to Kyiv, in a move that appears to be upholding demands by Moscow.

Speaking in a joint presser with his Ukrainian counterpart following their one-on-one meeting, the Turkish president struck a different tone from many of his Western counterparts, stressing the role of the Minsk Accords of 2015 — a peace agreement brokered by France and Germany that Kyiv has long argued favors Russian interests in eastern Ukraine.

“We sincerely believe that the crisis will be solved peacefully and diplomatically within the framework of the Minsk agreements on the basis of Ukraine's territorial integrity and international law,” Erdogan said during the televised presser.

Erdogan’s emphasis on the Minsk Accords appears to be heeding a call by the Kremlin. “If Turkey could encourage Kyiv to implement the Minsk deal, Moscow would welcome this development,” Kremlin spokesperson Dmitry Peskov said Jan. 19 in response to Ankara’s offer to mediate between the two parties.

Arguing that the agreement tipped the balance of power in the region in favor of Russia, Kyiv has called for its revision several times. “The fulfillment of the Minsk agreement means the country’s destruction,” Oleksiy Danilov, the secretary of Ukraine’s National Security and Defense Council, was quoted as saying by The Associated Press in an exclusive late January interview. “When they were signed under the Russian gun barrel — and the German and the French watched — it was already clear for all rational people that it’s impossible to implement those documents.”

Erdogan’s remarks might be aimed to win favors with Moscow to increase its chances to be a mediator in the standoff as part of Ankara’s intense efforts to improve its diplomatic standing. Turkey has been waging multi-pronged diplomatic efforts to mend its ties with regional countries, including Israel, Egypt and the United Arab Emirates.

Reiterating Ankara’s mediation offer, Erdogan said Turkey was ready to host a face-to-face meeting between the two countries’ leaders or “talks at the technical level,” adding that Russian President Vladimir Putin was planning to travel to Turkey after his visit to China, speaking in Ankara before his departure.

During the visit Erdogan and Zelensky also inked several cooperation accords, including a free trade agreement and a deal for the joint production of Turkish surveillance drones manufactured by Baykar Makina, owned by Erdogan’s son-in-law Selcuk Bayraktar’s family.