A spate of industrial action from courier drivers comes as they step into an important gap created by COVID isolation. 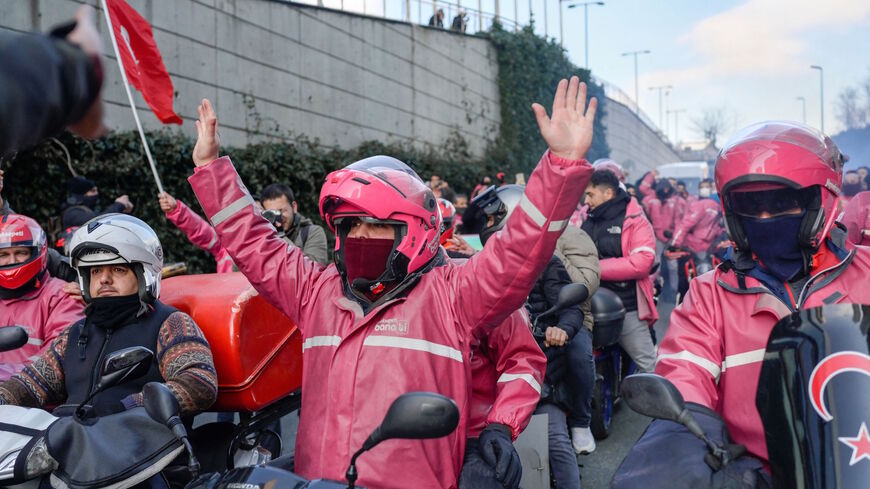 Delivery couriers of Yemeksepeti demonstrate to demand higher wages in front of the company's headquarters in Istanbul, on Feb. 5, 2022. - BULENT KILIC/AFP via Getty Images

ISTANBUL — Pink-clad motorcycle couriers may seem an unlikely vanguard in the fight for workers’ rights in Turkey.

But for the past week, the riders of online food delivery company Yemeksepeti have pursued better wages and conditions in the midst of the country’s worst economic crisis in 20 years.

Founded in 2001, the company now has 20 million users for its home-ordered takeaway service. Seven years ago it was sold to Germany’s Delivery Hero for $589 million and currently employs 9,000 workers.

While the company has boomed due to the Covid-19 pandemic, in recent days its distinctive couriers are more likely to be heading in convoy for the Yemeksepeti Istanbul headquarters, where they have been protesting since Feb. 1.

Safer working conditions are also an important goal for couriers, who say delivery time targets mean they face huge risks navigating the streets in treacherous weather. According to Nakliyat-Is, the union backing their strike, 190 couriers died in traffic accidents in the first 13 months of the pandemic.

The strikers have been emboldened by the success of couriers for Istanbul-based Trendyol, one of the world’s largest e-commerce platforms. Workers there won a 39 percent pay rise after three days of industrial action last month.

Furthermore, Nakliyat-Is claims a public call to boycott Yemeksepeti has led to a 70 percent drop in orders.

The strike comes as Covid-19 cases have hit record levels in Turkey, with more than 111,000 infections reported last Friday. As elsewhere, the pandemic has worsened the economic conditions for society’s poorest.

Annual inflation reached 49 percent last month, up from 36 percent the previous month. Independent economists, however, put the annual rate at more than 115 percent. The official rate of unemployment remains in double digits at 11 percent.

The pro-government Confederation of Turkish Trade Unions last month announced the “hunger limit” — the monthly food spending needed for a family of four to have a healthy, balanced and adequate diet — rose to 4,249 liras, the same level as the new minimum wage.

“We’re undergoing a really terrible economic crisis, and there’s a rapid rise in poverty and declining wages,” said Erdem Yoruk, associate professor of sociology at Koc University in Istanbul. “Normally in these circumstances you would expect strikes to erupt.

“There’s a high level of security politics in Turkey, and for a long time people have been reluctant to take to the streets or engage in strikes. Often in the past, these strikes were outlawed or banned by the government.”

However, because the “political hegemony of the government is declining and the rate of poverty and misery is increasing,” people feel more confident in taking action, he added.

The pandemic has ushered in a period where more people are working from home, a situation that has empowered courier workers.

“They occupy a very critical position. In addition to poverty and declining wages in all sectors, they have a much higher bargaining power compared to other parts of the labor force,” Yoruk said.

“We are now seeing a shift from where commodities are moving around. Couriers are carrying many things between companies and customers, suppliers and buyers.

“They’re running the system now. The capacity of working people to resist is directly proportional to their capacity to hurt the economy. These people have this bargaining power now.”

It is not just Yemeksepeti workers who are striking for better pay at a time when, according to Trade Ministry data, online companies have seen a spike in the volume of business.

“Although self-employed couriers operate entirely dependent on companies, companies make them look like they are working for themselves,” he said.

“They get rid of costs such as pay, severance and notice compensation, social security contributions. Couriers are also deprived of union rights because they are not workers.”

However, their lack of ties to a specific company gives the couriers leeway in their relations with their employers.

“They have no loyalty to one particular company, so they can switch easily between companies,” said Yoruk. “They’re employed informally and don’t have any liabilities, and if they’re not happy, they go to another company.”