Staggering price increases are forcing Turkey’s middle class to cut on spending in myriad fields, from shopping and transport to dining and travel. 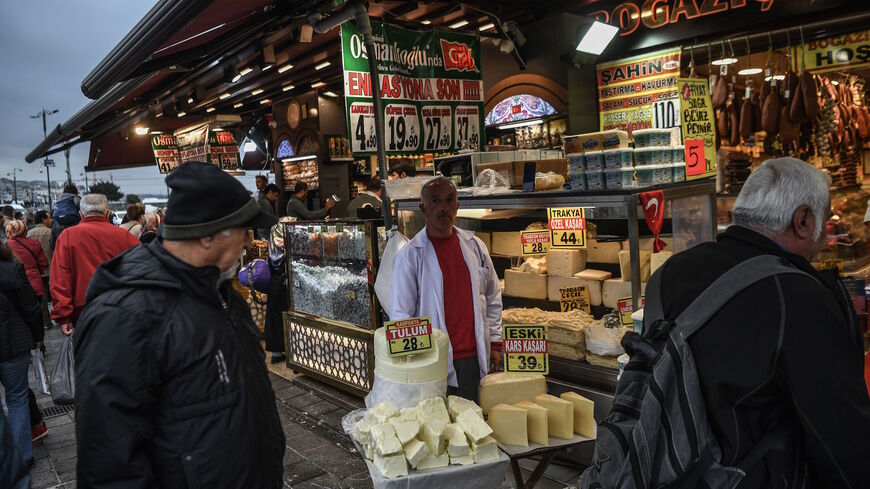 Turkey’s soaring inflation, fueled by big price hikes at the turn of the year, is dealing harsh blows not only to low-income groups but also the middle class, as  consumer demand has contracted in recent days.

Inflation in 2022 is widely expected to shoot above last year’s 36 percent, which was the highest rate under the 19-year rule of President Recep Tayyip Erdogan’s Justice and Development Party (AKP). Turkish consumers ushered into the new year amid a flurry of fresh price increases on commodities and services such as electricity, natural gas and transport. As a result, monthly inflation is likely to hit about 15 percent in January, exceeding the 13.5 percent rate in December. Double-digit rates are expected also in February and March.

Turkey’s army of jobless, including 3.8 million who continue to look for work and more than 4 million who have given up, are first in line for the impact. The minimum wage was raised by 50 percent to 4,250 Turkish liras ($307) last month, raising hopes of a relative shield against inflation for the half of the workforce that makes the minimum. Yet the pay hike will probably lose relevance by the end of March, leaving them with a real income erosion again.

Employees earning more than the minimum wage and self-employed small entrepreneurs in rural and urban areas — that is, generally the middle class — are not immune either. Their living standards are changing abruptly, with surging prices forcing reviews of consumption patterns.

The ability of the relatively higher earners to secure pay rises matching inflation depends much on their organizational strength. Public sector employees are granted compensation for inflation, but in the private sector, unionized employees with a right to collective bargaining represent only a small minority, accounting for no more than 3 percent of all wage-earners. The rest appear bound to suffer real income losses. And those from the self-employed middle classes, whether farmers in rural areas or entrepreneurs in urban centers, are struggling to stay on their feet. Squeezed between soaring costs and high borrowing rates, they are among the worst hit.

The staggering price increases have forced the middle class to cut spending. Car prices, for instance, soared by about 100 percent last year and are expected to rise further, forcing many to drop plans to buy new vehicles. Even using existing cars is becoming a luxury after the recent hikes on fuel prices and tolls. Istanbul’s hallmark traffic congestion has abruptly eased since the beginning of the year. “People can no longer use their cars because of the price hikes on gasoline. The traffic density in Istanbul has been decreasing over the past week,” Murat Ongun, the spokesman of the Istanbul Metropolitan Municipality, tweeted Jan. 7.

The daily spending patterns of the middle class are changing as well. Reports say that turnover drops at dining and drinking establishments have worsened after the latest price hikes, as fewer people choose to eat out or meet over a drink.

The government raised the special consumption tax on alcoholic beverages and tobacco by 47 percent on Jan. 3, leading to price increases of up to 33 percent. Taxes now account for four-fifths of the price of a pack of cigarettes worth 25 liras ($1.80), three-quarters of the price of a 700-milliliter bottle of raki, the country’s anise-flavored national booze, worth 255 liras ($18.40), and two-thirds of the price of half a liter of beer sold for about 35 liras ($2.50) at drinking establishments. The taxes on spirits have long stirred additional anger because they are widely seen as a tool to deter alcohol consumption as part of AKP efforts to impose its Islamic worldview. As a result, many liquor and tobacco shops and dining and drinking establishments have been struggling to stay afloat.

The dramatic depreciation of the Turkish lira, which lost nearly 44 percent of its value against the dollar last year, has also dampened the middle class’ appetite for foreign travel, compounding the impact of the COVID-19 pandemic. Foreign travel spending rose to just over $3 billion last year after plunging to $1 billion in 2020, when the coronavirus struck, but remained well below the $4.5 billion in 2018. The fast spread of the highly contagious omicron variant threatens to slow domestic tourism as well.

Amid the risk of hyperinflation, the middle class’s demand for loans has similarly fallen. Although the worth of consumer loans increased by 20 percent at current prices last year, it should be read as a decline of some 16 percent in real terms, given the 36 percent annual inflation. Home and car loans — the most popular with the middle class — have dropped notably in real terms.

In the retail sector, too, many businesses have seen their sales drop in a flash since the beginning of the year, reports say, including apparel stores despite the advent of the discount season.

A steep contraction in consumer demand, sucking in the middle class, could result in an abrupt economic stagnation, mainly in the second quarter of the year, meaning that a new wave of job losses could be looming.