For the ultra-Orthodox community in Israel, which considers Ukraine as a sort of a homeland, the possibility of a Russian invasion is taken personally. 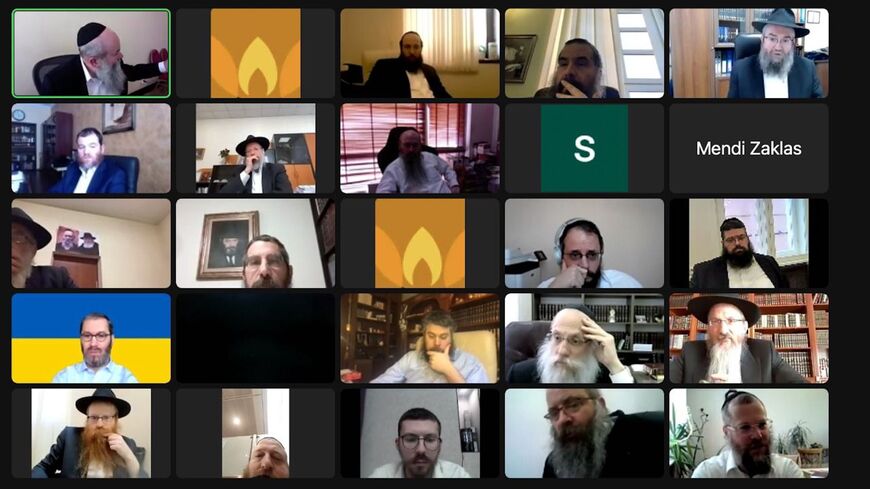 Chabad emissaries in Israel, Russia, Ukraine and the United States hold a Zoom meeting to discuss recent developments in Ukraine and evacuation plans on Feb. 15, 2022. - Chabad office in Moscow

As this article is penned, Russian President Vladimir Putin has announced he will partially pull back Russian troops from Ukraine. But what does that mean? Is the conflict over?

These questions intimately concern the ultra-Orthodox community in Israel. The most fascinating analyses are to be found at the stiblech, the Hasidic synagogues, where the congregations have been following with great interest all that’s happening on the border of Ukraine.

The connections between Ukraine and the Israeli ultra-Orthodox community go back to 1740, when Rabbi Israel, who became known as the Baal Shem Tov, was born in the town of Okup in Ukraine. He founded the Hasidic movement from the forests of the Carpathian mountains. Within a short time, it spread to all of eastern Europe and beyond.

Rabbi Israel enraptured all of Ukrainian Jewry. His path, based on the teaching that every Jew is beloved by the Almighty, was continued by Hasidic leaders from the cities of Ukraine: his successor Rabbi Dov of Mezeritch, the first grand rabbi of Chabad Rabbi Shneur Zalman of Liady, Rabbi Levi Yitzhak of Berditchev, or Rabbi Nahman of Bratslav. Hundreds more great rabbis lived throughout Ukraine, and after their deaths, they were buried in these towns, and their graves became sites of pilgrimage.

The Holocaust that exterminated Ukrainian Jewry did not stop the Hasidic movement, which came back to life in Israel and the United States, where the grand rabbis’ successors led Hasidic sects which bore the names of the Ukrainian cities.

These names, non-Jewish in origin, today draw such respect among the Hasidim that various inflections and spellings are assigned significance. Some Hasidic sects adopted a different spelling to distinguish themselves from the rival sect (for example, Chernobyl/Tzernabyl; Vizhnitz/Vizhnitza). Attached to these names are institutions in which millions of dollars are invested, with ongoing squabbles and even legal battles on who may hold the honorific of “the Grand Rabbi of Bobov” or “the Grand Rabbi of Satmar.”

It is no wonder that the wish to return to Ukraine, to the places where the great men of Hasidism lived and worked, burned in the hearts of many during the decades when the nation was closed under Communist rule. In these years, generations of ultra-Orthodox children continued to be raised on the example of these righteous men who lived in Ukraine. When the Communist wall fell in the early 1990s, the ultra-Orthodox community jumped at the opportunity to visit those places where the Hasidic movement began.

At first, it was the missionaries sent by the rabbi of Chabad, who established hundreds of communities throughout Russia and Ukraine. The missionaries today operate a broad network of synagogues, educational institutions, yeshivas and schools, welfare and health institutions, ritual baths, even orphanages.

Alongside the institutions, an enormous tourist industry has been built in the region, which operates in areas that have no Jewish communities today, only silent tombs. For instance, the cities of Hadyach (where the grand rabbi of Chabad is buried), Medzhybizh (where the Baal Shem Tov is buried), Belz, Zitomir, Berditchev, Hannipol, Yampil, and more, have magnificent mausolea over the tombs themselves, as well as “guest synagogues” which are high-class hotels, visited by thousands of Jewish tourists every year.

Not only Hasidim visit the region. Many Orthodox Jews of the Lithuanian stream who are ideologically opposed to Hasidism visit, and so do secular Jews who go on pilgrimages to discover their roots.

The city of Uman, in which Rabbi Nahman of Bratslav is buried, draws hundreds of thousands of visitors a year.  A giant tourism industry provides for the needs of visitors, especially at the Jewish New Year, when tens of thousands arrive. Around 200 Israeli families have settled permanently in the town.

For many ultra-Orthodox Jews in Israel, the towns of Ukraine are also an indelible part of their religious folklore. Unmarried and married young men, and even children who don’t consider visiting the United States or Europe, travel every year to Uman, to Medzhybizh, or Berditchev, and know the streets of these towns as if they were in the Jerusalem ultra-Orthodox Meah Shearim neighborhood.

Even in the midst of military tension, the Chabad missionaries broadcast business as usual. Rabbi Avrahmi Deutsch, who operates a huge hospitality center in Zitomir – a Soviet resort turned Jewish center – and Rabbi Moshe Weber, who heads the massive Menorah Center in Dnepropetrovsk, say that in Israel, people are more concerned about the situation than they are.

Rabbi Weber is in Israel, where he celebrated the engagement of his son and is now busy arranging for his flight back to Ukraine. He explains that he has many tasks to accomplish: he has to prepare for Passover in April, which for the Chabad missionaries means baking more than a million kilograms of matzah (Passover-kosher bread) to be sent to every corner of Russia and Ukraine, as well as arranging to host hundreds of Passover traditional dinners.

Chabad missionaries are preparing for a special campaign to mark the 121st birthday of the rabbi who passed away 30 years ago, but whose birthday is still celebrated. They are preparing to open 121 new institutions in Ukraine, the country where the rabbi was born. The war, it seems, does not concern them, and they clarify that they act according to the rabbi’s instructions: “Missionaries do not get involved in global politics.”