Women activists call on the Turkish government for a tax reduction and other measures to lower the prices of menstrual products, which have grown forbiddingly expensive amid the country’s economic turmoil. 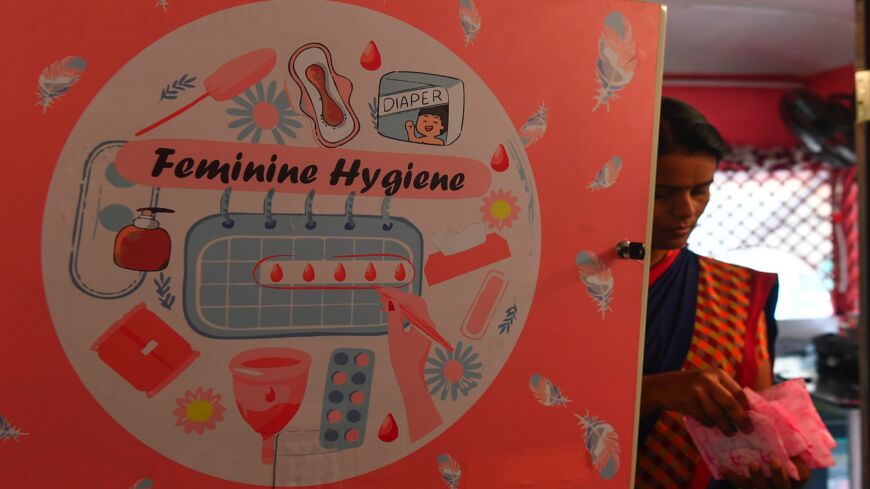 This photo taken on Feb. 9, 2020, shows an attendant checking the stock of sanitary pads inside a mobile toilet on a bus at a public park in Pune, India. - INDRANIL MUKHERJEE/AFP via Getty Images

Turkey’s leading political satire magazine, LeMan, devoted its cover to women’s menstrual products last week, depicting a woman looking desperately at a sanitary pad flying away in the air. It was a lampoon of the extent to which Turkey’s economic turmoil has eroded purchasing power, sparking a campaign to lower the prices of sanitary pads, which have become unaffordable for millions of women.

Turkey’s government-run statistical institute says consumer inflation hit 36.08% in 2021, while independent researchers put the figure as high as 82.81%. According to the institute, the price of sanitary pads rose by nearly 60% over a year to reach 1.05 liras ($0.08) per piece in December. Menstrual products are among the goods on which the government levies the highest value-added tax (VAT) of 18%.

Amid dizzying price hikes on basic goods and services from bread and meat to electricity and public transport, sanitary pads have become a luxury beyond the reach of millions of women. According to the Deep Poverty Network, a civic group devoted to helping the poorest, a survey it conducted among 103 families shows that sanitary pads have become inaccessible to 82% of women.

The growing problem has prompted local administrations to add sanitary pads to the list of handouts they provide to the needy. Istanbul’s Kucukcekmece Municipality, for instance, launched a campaign under the slogan “Sanitary pads are not a luxury but a basic need” last week, aiming to meet the needs of some 10,000 women in its district.

In some universities, female students have placed “solidarity boxes” in restrooms, from which fellow women can get sanitary pads for free. Female university students have also held demonstrations to draw attention to the problem. In the capital, Ankara, one might even come across street graffiti calling for free access to sanitary pads.

Canan Gullu, head of the Turkey Women’s Associations Federation, which cooperates with municipalities to help women in need, told Al-Monitor the organization collected six lorryloads of sanitary products destined for “women who are victims of violence and poverty in places where violence and poverty is rife.”

According to Gullu, the problem of access to sanitary pads has grown over the past decade, becoming more visible during the COVID-19 pandemic and aggravating further due to the country’s economic crisis. Ignorance on sexuality and female physiology lays at the core of the problem, she said, recalling a widespread practice until not so long ago whereby sellers would wrap sanitary pads in paper or put them in black plastic bags as if to hide something shameful. And last spring, for instance, some supermarkets sealed off their sanitary pad sections as part of pandemic restrictions banning the sale of non-essential goods. For Gullu, such practices show how female physiology is being ignored in the country. “It is a mindset stemming from gender inequality, which, amid the economic crisis today, ignores the women’s problem of access to sanitary pads,” she said.

Emphasizing that menstrual products are a basic need, women activists are calling on the government to lower the VAT on such items to the minimum rate. The issue reached parliament last week as Candan Yuceer, a female lawmaker for the main opposition Republican People’s Party, submitted a bill calling for a 1% VAT on sanitary pads and their free distribution to poor women.

The bill has yet to be taken up, but even an eventual VAT reduction would not be enough to resolve the problem, Yuceer told Al-Monitor. “A VAT reduction should be accompanied with a price adjustment because manufacturers have taken advantage of the economic crisis to push prices to exorbitant levels,” she said.

Yuceer, a medical doctor by profession, drew attention to the health risks the problem poses. “Sanitary items must be sterile and used only once or women could suffer serious infections,” she said.

Gullu noted, “In terms of reproductive health, we see that noncompliance with hygienic rules results in uterus infections. And this is being transferred to future generations as well.”

In response to the rising outcry, Family and Social Services Minister Derya Yanik made do with a statement that her ministry might initiate a study of the problem to propose measures. “We have been receiving requests regarding also adult and baby diapers, along with women’s hygienic products,” she said last week, adding that putting an upper limit to the prices of such products might be among the considered measures.

Yuceer said, “It’s remarkable how the government has yet to take action on the issue while it has been passing laws favoring rent seekers or men almost on a daily basis.” Other opposition deputies have proposed similar bills to lower the VAT on sanitary pads in recent years, but to no avail, she noted, stressing that the opposition is ready to back any government initiative on the issue.

Aysen Sahin, a columnist for the daily Evrensel, recalled controversial remarks by some government members and supporters advising the popular masses to eat and consume less as a means of coping with the skyrocketing prices. “What are they going to tell women now? To use two sanitary pads a day instead of six and get a vaginal infection or change tampons every six hours instead of every two and risk a toxic shock? … It’s such a vital issue,” she told Al-Monitor.

Refugees, seasonal agricultural workers, students and prisoners are among the worst hit by the problem. According to the Deep Poverty Network, women unable to afford menstrual products use mostly pieces of cloth by rewashing them several times.