Turkey’s consumer inflation is bound to increase further in the coming months after reaching 36% in 2021, with even bigger numbers recorded in the producer sector. 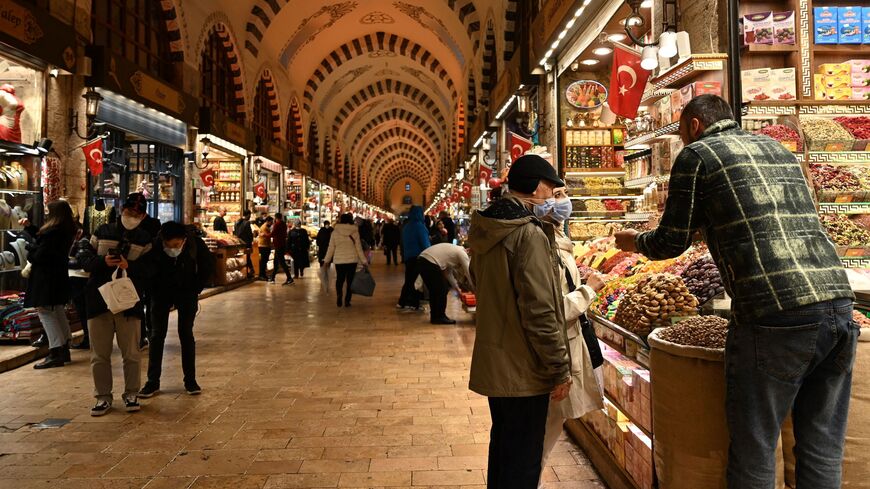 Tourists shop inside spice bazaar at Eminonu district in Istanbul on Dec. 16, 2021. Turkish inflation hit a mark of 36 percent in 2021. - OZAN KOSE/AFP via Getty Images

Turkey’s consumer inflation surged by a staggering 13.6 percent in December, bringing the 2021 annual rate to 36 percent — the highest under the 19-year rule of President Recep Tayyip Erdogan’s Justice and Development Party (AKP).

The record rate, announced by the Turkish Statistical Institute on Monday, comes as a fresh blow to Erdogan’s economic credentials. Since September, the bank has cut its policy rate by 500 basis points in four months, instead of raising the rate to rein in prices, as conventional economics dictates. Erdogan insists on the unorthodox view that high interest rates cause high inflation.

The hitherto highest inflation under the AKP was recorded in September-October 2018, when the year-on-year rate climbed to 25 percent. That surge followed political tensions with the Trump administration, which sent the lira plunging, soon after Turkey transitioned to an executive presidency system that concentrated power in Erdogan’s hands. The central bank at the time responded with rate hikes to cool the economy, reverting inflation to single digits in 2019.

But not so in 2021. The bank’s rate cuts pushed real yields on the lira deep into negative territory and fueled a rush for hard currency. In four months, the price of the dollar increased 59 percent, leading to sharp price increases in an economy that relies heavily on imports, including energy. Shortcomings in food supply — the result of structural problems in the agricultural sector, coupled with drought — proved another major factor.

Transportation appears to have contributed prominently to the December inflation, followed by food and home prices. The nosedive of the lira has caused car prices to jump 38 percent, and the government has recently stepped back from tax reductions to offset fuel price increases. A 16 percent increase in December brought the annual food inflation to nearly 44 percent.

Government officials see last month’s record inflation as an exception and hope for a steep decline in the coming months. This, however, is akin to whistling past the graveyard. Goksel Asan, the head of the presidential finance office, told a television interview Dec. 30 that he expected “a negative inflation in January under the impact of price corrections, provided that foreign exchange rates remain at their current level.”

Such a prospect appears highly unlikely and lacks any precedent from Turkey’s past economic crises. In 1994, when the lira lost more than 60 percent of its value, consumer inflation peaked at 24 percent in April, and though the rates declined to less than 2 percent in ensuing months, the annual rate reached 125 percent at year end. In 2001, another crisis year, consumer prices rose 68.5 percent.

Asan predicts that annual inflation will decline to between 15 and 18 percent in 2022, arguing that “the exchange-rate pressure on inflation will be limited.”

Producer prices jumped 19 percent in December, bringing the annual rate to nearly 80 percent, the highest since 88 percent in 2001. The huge gap of 44 percentage points between producer and consumer prices means that inflationary pressure on consumer prices will continue.

The trend in 2022 depends on how the lira will perform and the course of food prices. To prop up the lira and curb dollarization, the government introduced new measures Dec. 20, including a state guarantee to compensate lira depositors for any declines in the currency. The promised safeguard seems to have inspired little confidence among hard-currency holders thus far.

The annual consumer rate is likely to hit 50 percent by March, a prospect reinforced by an avalanche of price hikes in the final days of 2021 in the transport sector as well as key commodities such as electricity, natural gas and fuel. Those who managed to protect their savings from inflation last year by putting them in hard currencies, gold or bank deposits are likely to struggle to do so in the near future, especially in the first several months of the year. Furthermore, the US Federal Reserve is expected to start raising rates this year, making it all the more difficult for the lira to preserve its value.

Wage-earners have been hit the worst by the surging inflation and Erdogan has watched his poll numbers sag ahead of elections in 2023. The minimum wage — the pay of about half of Turkey’s wage-earners — was raised by 50 percent to 4,250 liras ($310) last month, but its purchasing power appears bound to melt fast in the face of soaring prices. Similarly, average salaries, which are only 30 percent higher than the minimum wage, have failed to keep up with inflation. According to a TUIK survey released last month, the average monthly gross salary increased 197 percent from 2012 to 2020, while consumer prices rose 221 percent in the same period. The gap is likely to have further widened in 2021.

Under existing inflation-adjustment schemes, millions of public servants and retirees from both the public and private sector are expected to receive pay raises of up to 27 percent this month. Yet, those hikes — based largely on the inflation rate in the second half of 2021 — are unlikely to make up for the ongoing loss of purchasing power. Meanwhile, nearly 8 million people remain jobless, left without an income as the cost of living soars.