The Syrian army loyal to Bashar al-Assad has struggled to control the country's eastern desert. 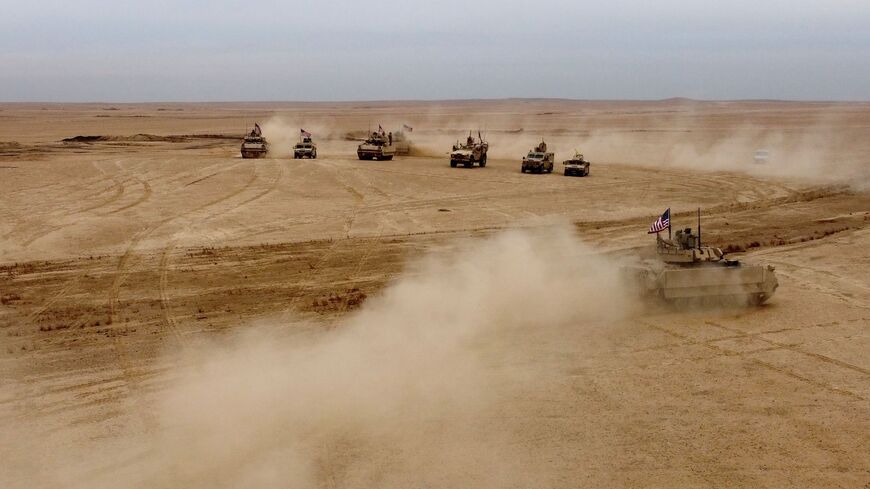 This picture taken on Dec. 7, 2021 shows an aerial view of US Bradley Fighting Vehicles during a joint military exercise between the Syrian Democratic Forces and the US-led international coalition against the Islamic State in the countryside of Deir Ezzor in northeastern Syria. - DELIL SOULEIMAN/AFP via Getty Images

Syrian state-run media said five soldiers were killed in an Islamic State missile attack on a transport convoy in the country’s eastern desert on Sunday evening.

Twenty others were wounded, state-run SANA news agency reported. The outlet operates under the regime of President Bashar al-Assad.

The attack occurred in the Badia desert between Palmyra and Deir Ezzor, according to SANA. The remote area remains a hotbed of IS insurgent activity even after nearly all of the country was recaptured from the jihadist group by the Syrian regime and Kurdish forces two years ago.

Two years ago, a Russian major general was killed in a roadside bomb attack in the desert outside Deir Ezzor city. Russia militarily backs the Assad regime.

On Dec. 2, IS fighters ambushed a bus of Syrian oilfield workers in Deir Ezzor province, killing ten and injuring one.

On Dec. 15, fighters infiltrated the Subaihan oilfield under the control of Kurdish-led Syrian Democratic Forces in Deir Ezzor and demanded extortion money over oil production.

The jihadist group used to rely heavily on Syria’s oilfields to fund its proto-state, but lost control of the oil trade amid the US-led bombing campaign and ground fighting in 2017-18.

A Syrian brigadier general was reportedly killed along with four soldiers and 13 civilians in the Badia desert in IS attacks in November, according to SOHR.

IS retains underground cells across eastern Syria. Last month US forces accompanied SDF fighters on a raid near Shadadi that left four men dead. The Pentagon said those killed were armed IS fighters.

The US retains some 900 troops in northeast Syria and at the remote al-Tanf outpost on Syria's southern border with Iraq. The troops are there to prevent IS's return while denying Russia, Iran and the Assad regime access to strategic terrain until a political resolution to Syria's civil war can be reached.