The popular protests erupted in rejection of local administrations since parliamentary blocs in Iraq neglected to hold provincial elections. 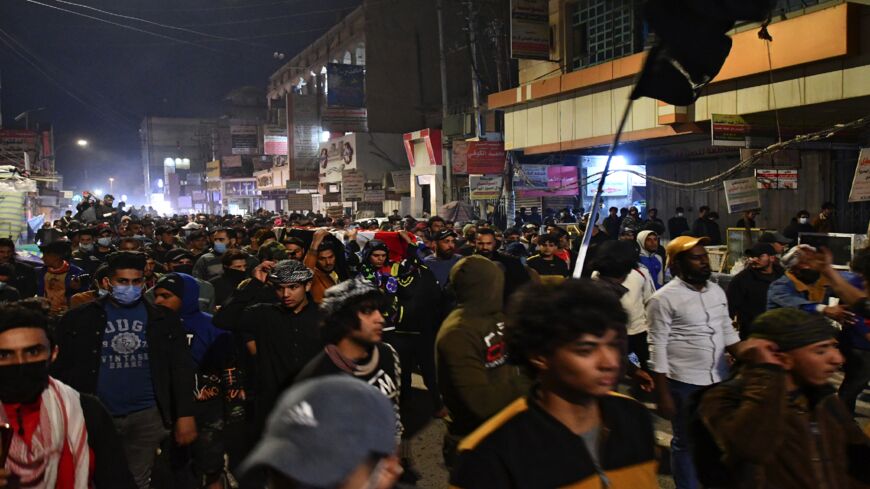 Anti-government protesters carry a mock coffin during a demonstration calling for the resignation of Gov. Nazem al-Waeli and against deteriorating public services, in Iraq's southern city of Nasiriyah in the province of Dhi Qar on Feb. 26, 2021. - ASAAD NIAZI/AFP via Getty Images

Dhi Qar Gov. Ahmed Ghani al-Khafaji and his counterpart in Najaf, Louay al-Yasiri, have resigned against the backdrop of the popular protests in December 2021 amid many political objections raised by opposition parties to the government of Prime Minister Mustafa al-Kadhimi.

Kadhimi accepted Khafaji’s resignation on Dec. 23, 2021, and Yasiri’s on Jan. 4. Yasiri stated in his resignation letter, “I am offering to [resign from my] position, to be replaced by my deputy,” explaining that he was not subjected to pressure from the leader of the Sadr movement, Muqtada al-Sadr, or Kadhimi. Meanwhile, Khafaji stated that his resignation “serves the public interest and aims to provide security and stability and preserve the interests of the citizens of Dhi Qar.”

During the past few weeks, citizens took to the streets of Najaf calling for Yasiri’s dismissal due to poor service conditions. Shiite leader Sadr promised to work to dismiss Yasiri and stressed during his visit to Najaf on Dec. 22, 2021, that there was no need to protest and demand his resignation, explaining that there are political and legal means to dismiss him, adding, “Enough noise, enough riot.”

In Dhi Qar, Khafaji resigned after protests calling for better living conditions and job opportunities turned into violent confrontations with security forces, causing injuries among protesters. As a result, Kadhimi ordered a special investigation committee to uncover the circumstances of the incident.

Although several governors have resigned or been dismissed by Kadhimi over the past months, the political atmosphere has made the recent resignations a subject for political debate as some Shiite parties fear that the Sadr movement will control the local administration in these provinces, especially since the movement is making similar demands to dismiss the governors of Babil and Diwaniyah.

Iraq’s governors are usually appointed or dismissed by the elected local councils known as provincial councils, which have not held elections since 2013 and were dissolved by the previous parliament in response to the demands of the popular protests that swept the country in 2019, as they are illegal councils that were exercising their powers despite the expiry of their legal mandate, in addition to being accused of corruption.

In the absence of provincial councils, Law 21 of 2008 granted the prime minister the power to freeze the governor’s work based on Administrative Law No. 14 of 1991. Meanwhile, the Shura Council issued a fatwa that governors wishing to resign shall submit their resignation to the caretaker prime minister in the absence of provincial councils and parliament during the submission of the resignation, provided that the prime minister assigns the deputy governor the task of managing the affairs of the province, with reference to Article 78 of the Iraqi Constitution.

Despite all these legal solutions to address the resignations of governors, the political parties opposing Kadhimi continue to criticize every decision or action taken by the government for motives that may be related to negotiations to form the new government.

Former Prime Minister and head of the State of Law Coalition Nouri al-Maliki stressed that he strongly rejected Sadr's pressure on Yasiri and said in a tweet: “Don’t governors know they are linked to the PM? Don’t the heads of departments know that they are linked to the governors, and neither they nor the governors have the right to respond to any request and submit their resignation? Doesn’t the PM know that he is primarily responsible for the governors and the heads of the departments, and he must protect them?”

State of Law Coalition parliament member Mohammed al-Ziyadi also believed the dismissal of the governors was part of “pressure methods being exerted against the blocs objecting to the election results,” adding that these practices will not affect the political process in the country at all and that they are useless actions.

Ziyadi noted, “These methods are not considered an end to the democratic process in Iraq.”

In the same context, the Fatah Alliance led by Hadi al-Amiri warned of the “phenomenon of governor resignations,” describing it as “dangerous.”

Fatah Alliance leader Fadel al-Fatlawi said that “this dangerous phenomenon is being caused by political parties that want to control local governments, and they are taking advantage of the absence of parliament and the weakness of the Iraqi federal government to resolve some crises in the central and southern governorates.”

The crisis of the local administrations will thus remain the same unless local elections are held again or the Iraqi Constitution is amended to ensure the abolition of local councils and grants the prime minister or parliament speaker the power to appoint governors, just as the popular protests demanded. Until then, the crisis will be a heavy subject for political debate.