Iran’s President Ebrahim Raisi traveled to Russia today to meet with President Vladimir Putin to discuss the expansion of economic ties, among other things. 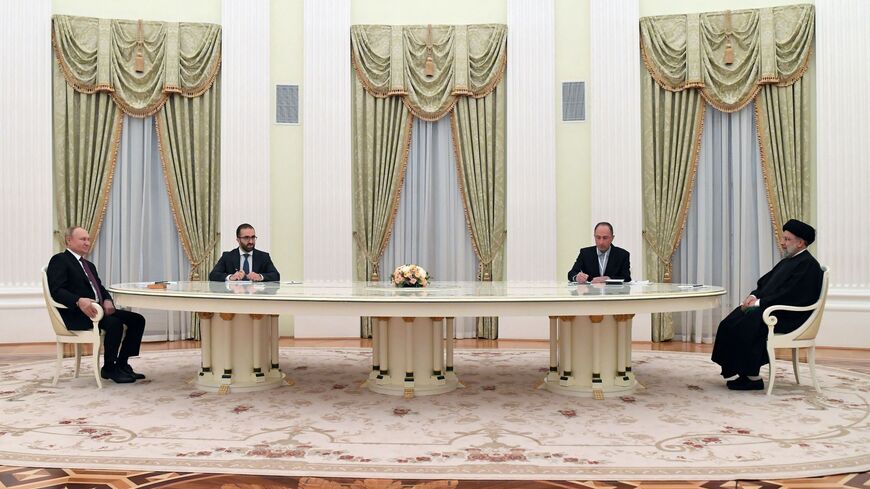 Iran’s President Ebrahim Raisi has made his first trip to Russia today, where he will meet with Russian President Vladimir Putin. Vice President Mohammad Mokhber, who led the cabinet meeting today in Tehran, called the visit “a fundamental change in international relations.” It will be the first meeting between the two leaders, who were scheduled to meet at the Shanghai Cooperation Organization. The meeting was postponed when one of Putin’s aides was reportedly infected with COVID-19. Raisi and Putin have reportedly spoken on the phone.

Ebtekar Newspaper called Raisi’s journey to Moscow a “strategic trip” and noted that Putin was the first world leader to congratulate Raisi on his election victory in 2021. The report read that one topic of discussion between Raisi and Putin will be the status of Iran’s permanent membership in the Eurasion Economic Union, an economic bloc of post-Soviet states in Eastern Europe and Central Asia. In 2018 Iran signed a three-year free trade agreement with the EEU. Permanent membership in the EEU would help Iran with US sanctions, and Iran needs Russia’s support to become a permanent member.

Other topics of conversation will likely include the ongoing nuclear talks between Iran and world powers, the 20-year agreement between Iran and Russia and the purchase of Sukhoi Su-35 fighter jets.

Javan Newspaper, which is close to the Islamic Revolutionary Guard Corps, reported that this trip stands in stark contrast to the Rouhani administration, which rather than look east to solve Iran’s economic problems, had looked west at resolving Iran’s problems with the United States. The article detailed how Rouhani had ignored economic opportunities between the two countries, something Putin reportedly brought up to Supreme Leader Ayatollah Ali Khamenei in their meeting in 2015.

Interestingly, the article read, “Despite public opinion, Iran-Russia ties are not strategic.” Other than “general security and military” interests, Iran and Russia have no joint interests. To show the disparity, the article noted that Turkish-Russian trade is at a much higher volume than Iranian-Russian trade despite Iran and Russia being aligned geopolitically on a number of regional disputes and Turkey and Russia often working against one another’s interests.

Iran’s ambassador to Russia, Kazem Jalali, told Tasnim News Agency that the duration of the visit between Raisi and Putin was not yet determined. Some media reports suggested that the meeting would last two hours, but Jalali said that there was no time limit. Jalali said that Raisi would also address Russia’s parliament as well as meeting with Russian economic leaders. There will also be a meeting with Iranians living in Russia.