Narges Mohmmadi was sentenced to eight years in prison following a five-minute trial. 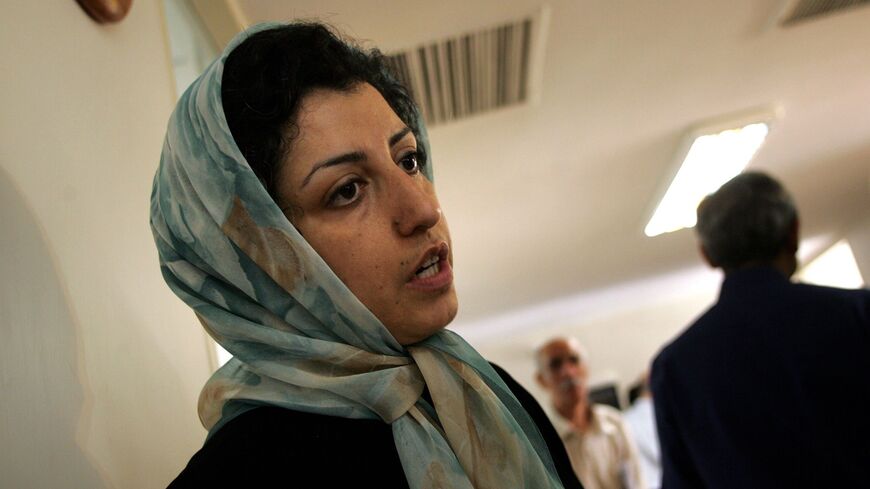 Tara Sepehrifar, senior Iran researcher at HRW, said Friday that Mohmmadi’s “cruel detention and prosecution” was “clearly intended to crush her into silence at all costs.”

Mohmmadi was the spokesperson for the Defenders of Human Rights Center in Iran and campaigned against Iran’s use of the death penalty. After serving more than eight years in an Iranian prison on trumped-up national security charges, Mohmmadi’s 16-year sentence was cut short and she was released in October 2020.

In November 2021, Mohmmadi was rearrested after attending a memorial service for an individual killed during Iran’s deadly crackdown on nationwide protests in November 2019.

Rahmani, who is based in France, said his wife also received a two-year ban on membership in political parties and "activities in social and digital platforms" as well as a two-year internal exile. Mohmmadi’s trial was held behind closed doors and she was denied access to a lawyer, Rahmani said.

Mohmmadi is one of many rights defenders imprisoned in Iran after trials widely criticized by the international community as grossly unfair. Iranian authorities are also holding more than a dozen dual nationals, including several Americans, on vague spying charges.

“One by one, the Iranian authorities are trying to silence the voices of dissent in Iran,” said Hadi Ghaemi, executive director of the Center for Human Rights in Iran. “The Iranian government fears these brave individuals because they speak truth to power and their voices carry great authority in Iranian society."