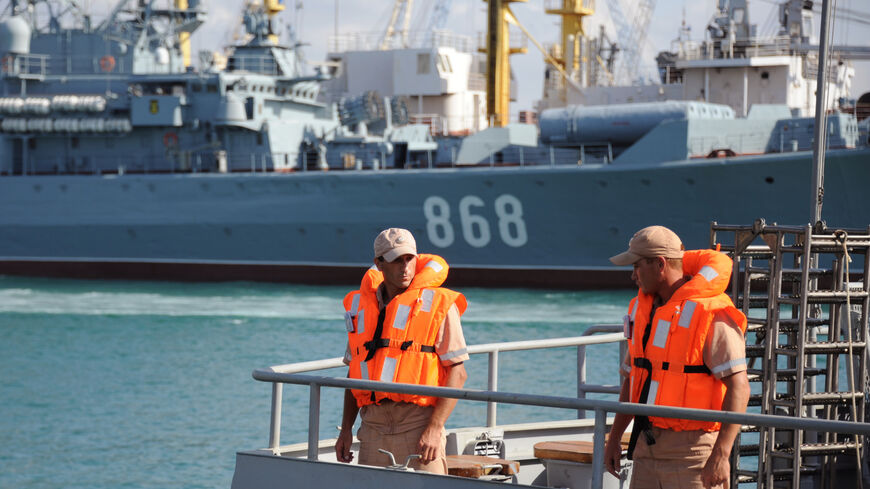 Russian soldiers stand aboard a ship at the Russian naval base in the Syrian Mediterranean port of Tartus on Sept. 26, 2019. - MAXIME POPOV/AFP via Getty Images

Ports in Syria and Crimea have signed agreements on boosting economic cooperation.

Permanent representative of Crimea Georgy Muradov said yesterday that seaports in Crimea signed an agreement with Syria’s port of Latakia on the Mediterranean coast. The deals are related to the economy and tourism, Russia’s official TASS news agency reported.

Crimea is a peninsula in the Black Sea. Crimea was an autonomous republic of Ukraine until 2014 when its parliament voted to become a federal republic of Russia and was subsequently annexed. The annexation occurred during the 2014 Ukrainian revolution and subsequent war between Ukraine and Russian-backed separatists in the country. Crimea’s population is majority Russian, with sizable populations of Muslim Tatars, Ukrainians and others.

Most of the international community still recognizes Crimea as part of Ukraine.

There is a history of Russian breakaway regions seeking cooperation with Syria. The president of Abkhazia visited Damascus last June. Russia took the Caucasian region from Georgia in 2008.

Syria’s port in Latakia has significant strategic value for Russia and Iran and serves as both countries’ gateway to the Mediterranean Sea. In December, Israeli jets bombed the port, targeting Iranian assets.

Crimea has a developed tourism sector and is one of Russia’s warmest regions. Syria is also keen to welcome tourists to Latakia, which has been relatively safe amid the ongoing Syrian civil war. In terms of trade, boats can reach Latakia from Crimea and vice versa via the Bosporus in Turkey.