Workers at the BBC's Istanbul bureau are taking action after the corporation denied a salary increase in line with inflation. 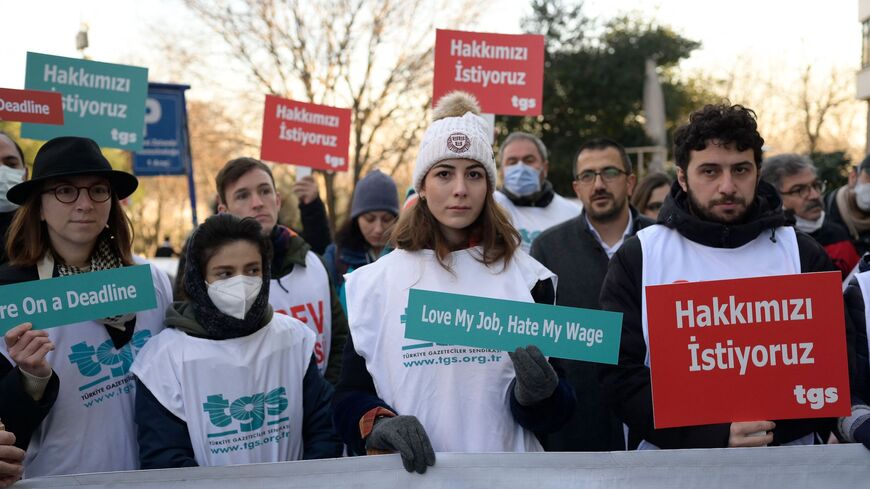 Journalists of the British Broadcasting Corporation stand with placards as they strike in front of their Istanbul office on Jan. 14, 2022. - BULENT KILIC/AFP via Getty Images

Staff at the BBC’s Istanbul bureau have gone on strike over what union negotiators say is the broadcaster’s refusal to meet reasonable demands amid Turkey’s surging inflation.

Prices in Turkey rose 36% year-on-year last month, according to the government’s statistics agency, leaving the BBC staff, whose last raise was a 7% hike in 2020, facing a drastic shortfall in their earnings.

Staff are all paid in Turkish lira, which has fared even worse over the last year, losing nearly half its value against the US dollar.

Gokhan Durmus, president of the Journalists Union of Turkey, said five months’ talks broke down as BBC negotiators in London “didn’t really understand the situation” of their Turkish service employees. He said the corporation showed an intransigent approach to the discussions.

“During the negotiations there was no intention to come to terms,” Durmus told Al-Monitor from the picket outside the BBC’s office in downtown Istanbul Friday. “There was no desire for an agreement. If there was an intention then both sides could compromise, but they didn’t compromise and closed the bargaining process.”

The 13 staff members working for BBC Turkish and the corporation’s international and monitoring services in Turkey are asking for a wage raise in line with inflation.

Many point out that the falling price of the Turkish lira — the currency has lost more than half its value against the UK pound since talks began in August — means the BBC’s wage bill in Turkey has fallen accordingly.

Last month, the Turkish government raised the minimum wage by 50%, a reflection of the serious impact inflation has had on pay. Independent economists at the Inflation Research Group have put annual price increases at nearly 83%.

“We are urging the BBC to come to the negotiating table and we want the BBC to hear the demands of their employees,” Durmus added.

BBC staff spoke to Al-Monitor on condition of anonymity for fear of losing their jobs. One said, “During the negotiations there were some points that we revised but even those haven’t been met by the BBC.”

Journalists working for the Turkish branches of foreign media outlets such as the BBC, Voice of America and Germany’s Die Wel, are facing increasing pressure in Turkey’s adverse media environment.

Three years ago a government-linked think tank named individual journalists working for foreign organizations and accused them of anti-government bias. At the time the BBC condemned the “blacklisting” of journalists as “completely unacceptable.”

The issue of foreign-funded Turkish media companies arose again last summer when the broadcasting authority said that “under the guise of press freedom … hostility towards Turkey [is] produced and negative propaganda is pumped to the public by perception operations.”

Striking BBC staff said they were aware of their role in providing independent news in a country where most news outlets are controlled by the government and its supporters in the business world.

“The BBC is a source of news for many people in Turkey,” said a second BBC worker. “Nobody expects to get rich but they expect fair compensation for their work. We love working for the BBC but it’s become too difficult.”

The staff member added, “The BBC doesn’t grasp what the situation is like in Turkey. We’re paid in the local currency, not pounds, and we also don’t get benefits comparable to the UK or other countries, such as pensions or medical coverage for family members.”

According to the journalists union, the BBC’s final pay offer was a 20% raise. This increase would not address the “meltdown” in wages, the union said in a statement, adding, “We also do not accept that journalists in Istanbul, who are proud to work for the BBC, are refused a number of fundamental rights that are standard market practice in Turkey.”

“We see as discrimination the lack of recognition of some rights for Istanbul staff that are granted to BBC journalists in the UK and many other BBC bureaus.”

The workers’ struggle has received support from colleagues at the BBC including international correspondent Orla Guerin, who noted that it was the first media strike in Turkey since 2009, and former Istanbul correspondent Mark Lowen, who tweeted that staff were fighting for “fair adjustment in their salaries.”

In a statement, the BBC said, “We hear and understand the financial concerns of our staff in Turkey and the BBC has implemented a pay increase and made an additional benefits offer. In addition, we continue to monitor volatile markets with mechanisms in place to support staff financially during sustained volatility. We regret that this strike action will negatively impact our Turkish audiences’ access to trusted and impartial news.”

On Monday UK Culture Secretary Nadine Dorries announced a two-year freeze on the price of the license fee paid by British viewers, the BBC’s main source of income.