Journalists working for foreign news agencies in Turkey are accused of being global conspirators to foment mass protests in accusations sometimes laced with anti-Semitism. 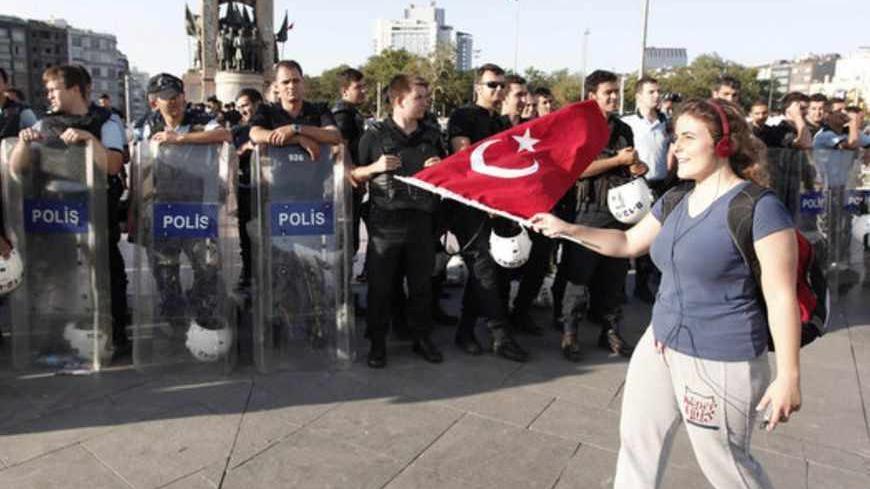 An anti-government protester waves a Turkish flag in front of riot police during a demonstration at Taksim Square, June 25, 2013. - REUTERS/Osman Orsal

“Journalist at BBC. Theater enthusiast. Rock music fan.” This is how Selin Girit, a respected Turkish reporter for the BBC, describes herself on her Twitter profile. But the Turkish authorities have labeled Girit a “foreign agent” and a “traitor to her country” in line with a new and chilling campaign against foreign journalists covering the mass anti-government protests that have been rocking Turkey.

The accusations against Girit were first leveled by Ankara’s longtime mayor, Ibrahim Melih Gokcek. On June 23, Gokcek, a member of the ruling Islam-rooted Justice and Development Party (AKP), shared a series of inflammatory messages targeting the journalist with his 700,000+ Twitter followers.

“Who is @selingirit, BBC’s reporter in Turkey?” he asked before claiming, “Led by England, they are trying to collapse our economy via hired agents, both nationally and internationally. They are dreaming for Turkey to be the ‘sick man of Europe’ once again.” Gokcek then called on his fans to “show your democratic reaction” by popularizing the Turkish hashtag #ingiltereadinaajanlikyapmaselingirit, which roughly means “Don’t spy on behalf of England, Selin Girit.” The hashtag went viral in Turkey but within hours, a counter-campaign with the hashtag #provokatormelihgokcek, or “Melih Gokcek the provocateur,” began top trending globally.

Hardly a day passes without one foreign media outlet or another being blamed for the protests that began over a development project in Istanbul’s Taksim Square and swiftly morphed into a mass outpouring of anti-government feelings. The chorus of accusations is being led Turkey’s prime minister, Recep Tayyip Erdogan, who depicts the protesters as “terrorists” and the media as their “pawns.” Reuters, the BBC and CNN are frequently named. Few have been spared for covering the protests as Turkey’s self-censoring news channels looked the other way. A growing number of resident foreign correspondents are voicing unease.

“When I covered Erdogan’s [June 16 rally in Istanbul] I didn’t dare say who I work for,” confided a journalist for a major western news outlet who declined to be identified by name. “I was scared.”

Unlike their cowed Turkish counterparts, Western media bosses are beginning to speak up.

“It is unacceptable for our journalists to be directly targeted in this way,” said the BBC’s global news director Peter Horrocks in a statement on June 24. But his words appeared to have little effect. A day later Erdogan continued the salvoes against Girit during a speech before the parliament.

Girit’s supposed crime was tweeting a call for a consumer boycott to bankrupt the economy. Never mind that she was relaying quotes from protesters. Turning a deaf ear to her clarifications, Gokcek and now the prime minister insist that Girit was airing her own views.

This version of events meshes neatly with the government’s claims that the mass protests were orchestrated by a global conspiracy whose sole purpose is to destabilize Turkey and overthrow the AKP. Erdogan calls this alleged cabal of foreign governments, bankers and journalists a “global interest-rate lobby” bent on driving up interest rates so as to wreck Turkey’s economy and enrich themselves.

One newspaper, Takvim, carried the slander to a new level when it splashed a fake interview with CNN International star Christiane Amanpour on its front page. The headline read “Dirty Confession” and Amanpour was quoted as admitting, “We did everything for money.” Buried somewhere in the fine print was Takvim’s own confession that the interview wasn’t real.

Rampant anti-Western sentiment (laced with anti-Semitism) predates Erdogan and the AKP. It’s a national affliction that cuts across ideological lines. A large number of Turks still cling to assorted conspiracy theories. And all cleave to the same theme: The West wants to weaken, divide and eventually dismember their beloved republic much as they did with the Ottoman empire. Anti-American feelings run feverishly high. In a 2012 survey, Pew Research found that some 72% of Turks had an unfavorable view of the United States.

Western journalists have long served as convenient scapegoats who help distract from the country’s real troubles — not that Turkey is any kinder to its own. With some 65 journalists behind bars for their reporting activities, Turkey continues to hold the dubious title of the world’s biggest jailer of journalists, according to the Organization of Security and Cooperation in Europe (OSCE). Responding to the Turkish government’s claims that most were in prison on alleged “terrorism” charges, the OSCE’s media representative Dunja Mijatovic told Al-Monitor: “We examined every single case. Yet the government is continuously denying that there are problems.”

In a further ominous turn, the government is said to be pondering legal action against members of an alleged cell accused of inflaming protesters with their “provocative” tweets. The pro-government Yeni Safak claimed that a list of 50 such offenders has been drawn up by the national intelligence agency MIT. Meanwhile, government officials, even prominent cabinet ministers, have set up their own online SWAT teams. Selin Girit gets special attention. Aydin Unal, who according to his Twitter profile is “a senior adviser to the PM,” wrote, “Madame, it would suffice for you to sell your labor. No need to sell your country and your dignity to the BBC.”

Rights groups warn that Erdogan’s continued diatribes are putting journalists at risk. The Committee to Protect Journalists has documented several cases of police brutality. Gokhan Bicici, a cameraman for private IMC news channel was repeatedly beaten and dragged on the street by a group of riot police on June 16 for resisting their attempts to delete his footage. He was detained without charges for two days.

“I heard one of them say, ‘Take him to an apartment building and finish him off,” Bicici recalled. Arkady Babchenko, a Russian reporter, says he was attacked by police as he was filming empty police cars near Taksim Square. Babchenko told The Voice of Russia: “They kicked my legs and gave me one very painful kick in the groin,” adding, “They beat me up so badly that now I cannot walk.”