Why Turkey is in crosshairs of Chechen leader

Chechen leader Ramzan Kadyrov’s latest threats to Ankara have betrayed the undercurrent tensions between Ankara and Moscow that have been simmering for a while. 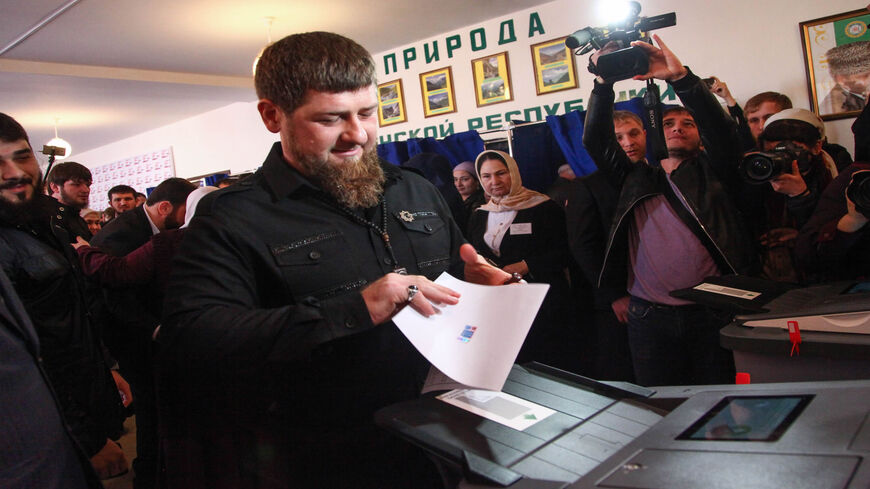 Chechnya's leader Ramzan Kadyrov casts his ballot as he votes during Russia's presidential election at a polling station in the settlement of Tsentoroy, outside Grozny, March 18, 2018. - Stringer/AFP via Getty Images

Chechen leader Ramzan Kadyrov, the leader of Russia’s Muslim-majority Chechnya region and a loyalist of Russian President Vladimir Putin, has triggered a fresh spat between Turkey and Russia by suggesting to name a park in Chechnya after Turkey’s public enemy No. 1, amid ongoing disagreements between Ankara and Moscow over Syria and Ukraine. According to the sources familiar with the matter, Kadyrov’s hit to Ankara’s sore spot was a manifest of an ongoing face-off between Ankara and the Chechen leader that also involves a Russian spy network that Turkey claimed to have busted in November.

In retaliation to Turkey naming a park after Dzhokhar Dudayev, Chechnya’s pro-independence leader in the 1990s, Kadyrov suggested that a park in Chechnya could be named after Abdullah Ocalan, the jailed leader of the outlawed Kurdish militants fighting against the Turkish government.

“I openly appeal to Turkish President Recep Tayyip Erdogan. Make up your mind! Either you receive the status of a state that publicly supports terrorists, or you advocate transparent and honest relations with the Russian Federation,” Kadyrov was quoted as writing on his Telegram channel, threatening Ankara to name a park in Grozny after Ocalan.

The incident could have been passed over as another Kadyrov antic had he not received support from the Kremlin and the Russian Foreign Ministry. Arguing that Kadyrov's reaction was “emotional,” but also reasonable, Kremlin spokesman Dmitry Peskov said, “We have already notified our Turkish colleagues via diplomatic channels that we, to put it mildly, do not approve of such names in Turkish cities.”

Foreign Ministry spokeswoman Maria Zakharova also weighed in, saying Turkey's naming a park after Dudayev was “unacceptable,” and that the move “must be strongly condemned by the entire international community.”

Emboldened by Moscow’s support, Kadyrov has doubled down on rhetoric, calling on Erdogan to remove Dudayev’s name from the park. He also urged the Russian Foreign Ministry to undertake pre-emptive measures to counter Turkish moves that threaten Turkish-Russian relations.

While Kadyrov is hardly a favorite of the Chechen diaspora in Turkey, Dudayev is embraced as a hero and martyr — not only by Chechen and other Caucasian migrants but also various segments of Turkish society. Back in the 1900s, the Chechen rebellion, particularly the first Chechen war in 1994-96, resonated deeply both with the Turkish public and the country's leaders. Dudayev received assistance from the Turkish government, including the satellite phone that eventually helped Russian forces to identify his whereabouts and kill him in a missile strike. Several sites in Turkey as well as Georgia, Poland, Lithuania, Latvia, Estonia, Ukraine and Bosnia Herzegovina were named after Dudayev.

Until now, these designations have hardly triggered a diplomatic crisis between Ankara and Moscow. Furthermore, Kadyrov himself was also among those who used to commemorate Dudayev respectfully. His latest belligerent reaction and Moscow's support of him raises questions about the reasons for such “character assassination" against Dudayev’s symbolic name and the course of the relations between Ankara and Moscow.

Speaking to Al-Monitor, Chechen refugees in Turkey have cited two possible driving forces behind Kadyrov’s aggression: First, some members of the Chechen diaspora in Turkey have recently exposed the crimes reportedly committed by Kadyrov and his cronies through digital platforms such as “1ADAT” and “Security Turkey.”

In response to revelations, Kadyrov has sought revenge and punishment. Al-Monitor learned that several former Chechen commanders in Turkey were secretly tailed by unknown people. As part of an investigation over the matter, Turkish police caught two Chechens in Turkey’s Mediterranean province of Antalya last March. The two Chechens who were identified as Hamzat Dokuyev and Badruddin Kimayev are reportedly close to Kadyrov. Similarly, members of a Russian spy network that the Turkish authorities busted in November had said to have links to the Chechen leader. Turkish police rounded up six suspects as part of the bust.

Much to Kadyrov’s indignation, Turkey is no longer an operational safe haven for Kadyrov's men unlike when several Chechen exiles were gunned down in the past. Back then, Turkish authorities were accused of leniency with the Russian intelligence and criticized for quickly extraditing people caught in the investigations over the murders.

For example, Medet Onlu, a Turkish-born Chechen and vocal advocate of Chechen independence, was killed in Ankara in 2014. Although the suspects who shot Onlu were identified, the investigation was covered up. Turkish police released the man who was accused of instigating the assassination. Some progress was achieved in the case later on thanks to the persistent efforts by Onlu’s family and their lawyer.

“Now, we see a change in the attitude of [the Turkish intelligence] and security forces,” a Chechen source told Al-Monitor under  strict condition of anonymity. “I can say that lately — in cooperation with the Chechen refugees here — they have been tracking Kadyrov's men more closely.” This shift is directly connected with the ongoing tensions between Ankara and Moscow.

Kadyrov, who is accused of involvement in the murders of the Chechens in Turkey, is hardly a popular name in Ankara. While he freely travels to Islamic countries such as Saudi Arabia, the United Arab Emirates, Jordan and Bahrain, he is having difficulty visiting Turkey that hosts the largest Chechen diaspora.

According to the Chechen source, the six people who were rounded up by the Turkish police in October was the latest in a series of “developments that upset Kadyrov.”

Local media reported that the suspects, who were identified as Russian citizens Abdula Abdulayev, Ravshan Ahmedov, Bislan Rasayev and Aslanbek Abdulmuslimov; Ukrainian citizen Ihor Yefrim; and Uzbek Amir Yusupov, were allegedly planning to organize an attack against the Chechen dissidents in Turkey. During a raid in Abdulayev’s house police recovered an unlicensed gun with a laser and silencer.

The group was in the crosshairs of Turkish intelligence for some time. Bislan Rasayev, who was identified as the ring’s leader by another suspect, was in contact with a man who worked with the Chechens previously caught by the Turkish police in March. The suspects were exposed after they joined the Telegram group "Security Turkey," founded by Chechens in August and shared suspicious messages, raising a red flag.

All six suspects were arrested pending trial. During his interrogation Ahmedov told Turkish prosecutors that Kadyrov’s cousins Adam Delimhanov and Kazbek Dukuzov ordered them to organize assassinations of Chechen dissidents in Turkey.

Delimhanov and Dukuzov, who have close ties to Kadyrov, are accused of a long list of grave crimes against the Chechen dissidents abroad. Dukuzov’s name was involved in the murder of American journalist Paul Klebnikov who was gunned down in downtown Moscow in 2004, as well as assassination attempts against Georgian journalist Giorgi Gabunia and Chechen dissident Mamekhan Umarov. Delimhanov, meanwhile, is accused of instigating the murders of former Checen commander Sulim Yamadayev and Kadyrov critic Umar Israilov.

Yet, in addition to the hostilities between the two Chechen camps, Kadyrov’s standoff with Ankara has also to do with the Kremlin's disgruntlement with Ankara. His latest broadsides at Ankara can also be seen as Moscow’s response to Ankara over its military cooperation with Ukraine and refusal to put the Crimean Peninsula problem on the back burner.

In an unprecedently harsh warning last May, Zakharova lashed out at Ankara’s language on the Crimea. “If this rhetoric continues, we will also have to pay attention to similar problems in Turkey. We would not like to do this, so I hope that the Turkish Foreign Ministry will hear us today,” she said.

Following her remarks, Moscow hosting two separate delegations from the Syrian Kurdish autonomous administration has offered some clues how Moscow could put Ankara’s nerve on the edge. Turkey considers Syrian Kurdish groups “terrorists” affiliated with the outlawed Kurdistan Workers Party (PKK). Unlike the European Union and the United States, Russia hasn’t designated the PKK as a terrorist organization.

Kadyrov, meanwhile, is a staunch Moscow loyalist who provided great help to the Kremlin’s strategies to militarily support the Syrian government and the separatists in Donbass. His far from diplomatic style is also well known. For example, in a speech this week, he suggested that Russia should annex Kyiv “just as Crimea.”

Yet Kadyrov’s impulses are only gratified by Moscow whenever the Kremlin sees a necessity to stir up controversies or elbow its counterparts. Meanwhile, Turkish intelligence’s scrutiny of Kadyrov's cronies in Turkey indicates that Ankara is also on guard against Moscow.