The presidential system’s negligence of Turkey’s realities has turned what would be a difficult economic and political era anyway into one that is also dark and dangerous. 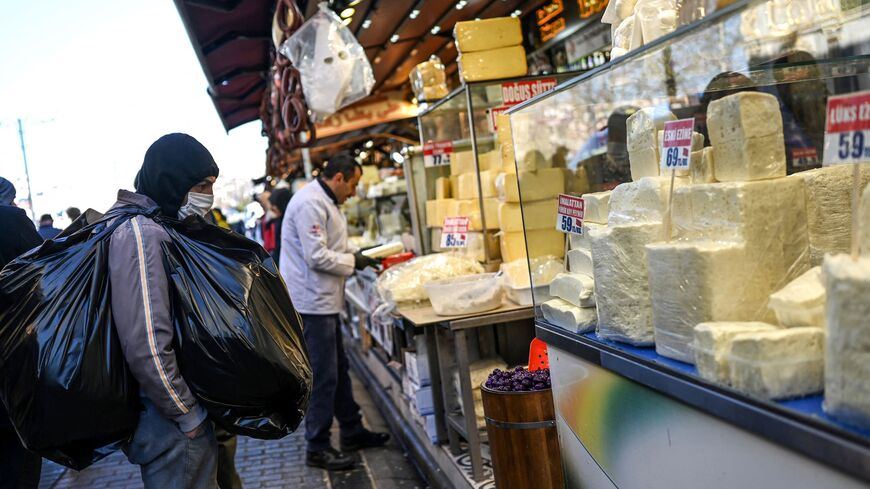 A bystander looks at shops in Eminonu bazaar district of Istanbul, on Dec. 21, 2021. Turkey's beleaguered lira strengthened Tuesday, after a wild start to the week saw its value swing by 30 percentage points in response to President Recep Tayyip Erdogan's emergency economic support measures. The mercurial Turkish leader stunned markets and his political opponents Monday by effectively tying the value of some lira bank deposits to the dollar. - OZAN KOSE/AFP via Getty Images

At a speech at an award ceremony for academics on Dec. 19, Turkish President Recep Tayyip Erdogan mentioned the sharp decrease in the Turkish treasury reserves. He said “when I was the Prime Minister, we increased the reserves up to $135 billion. Then a decrease was experienced. I was not there. I was the President by then. Now the reserves are again above $100 billion.”

Erdogan’s comments confused the public. What does Erdogan mean when he says he was absent? Who was then in charge then? Politicians and satire outlets ridiculed Erdogan’s bizarre comment. This is particularly perplexing for Turkey watchers who had heard Erdogan much repeated phrase: “I am the one responsible for the economy.” Who is responsible for what and under which conditions is becoming more and more difficult to determine in Turkey.

On Dec 20, Erdogan pledged to protect the Turkish lira and urged everyone to invest in the national currency. Lira surged from a historic record low 18.36 per dollar to 11.09 per dollar in the span of a day. Erdogan and his team seem to keep trying new “experiments” while the only constant is volatility and instability.

It is understandable that during tough times people in charge would do their best to boost public morale. However, AKP politicians’ refusal to accept unpleasant reality has reached alarming levels. It is almost impossible to report objectively, simply because reporters cannot access reliable information.

For example, on Dec 16, Erdogan announced the minimum wage at 4,253 Turkish liras. He added that married minimum wage earners and those who have children will be able receive higher amounts.

However, a day later, Vedat Bilgin, Minister of Labor and Social Security, announced that benefits will be paid in tax returns. But the government has stopped taxing minimum wage earners, so there would be no tax return. If you find it confusing, you are not alone. Bilgin hasn't elaborated his comments but some of the experts clarified what the minister meant: there will be no more adjustments according to one’s family status. The minimum wage would be applied to everyone. By the time you are reading this piece, this decision might again be altered.

The minimum wage might not be that important for developed countries, where most people in the workforce earn significantly higher incomes. However, workers unions indicate that some 69 percent of all those in Turkey's private sector receive minimum wage. The information provided by Turkey's official statistical Institute is not accurate enough to be trusted on basic measurements such as the inflation rate. The new minimum wage rate if we assume one dollar to be 12 liras is around $327.

A further problem is the appearance that AKP elites are losing touch with reality. In early December, Erdogan had told the public his model resembles the Chinese economic system, yet a week later Nureddin Nebati, newly minted Treasury and Finance Minister, said it was not the Chinese model.

Nebati sent fears down the spines of anyone who is knowledgeable about economic recovery when he said the success of this new model would rest on the public's “belief and trust.” He dealt the final blow on the Turkish public’s already fragile confidence when he said, “I would lose everything I have if the situation doesn’t improve. I have 1,000 workers. With my 1,000 workers I would lose everything. I would lose all that my father left me [as inheritance].” People could not help but question is the minister concerned about the wellbeing of the country or his own?

The inability to face facts is combined with lack of empathy for most AKP elites. For example, a year ago during a parliamentary session when an opposition lawmaker described millions trying to survive on stale bread, an AKP lawmaker, Sahin Tin yelled “if they are eating bread, it means they are no longer hungry.” Why do AKP elites grip on reality falter?

The AKP leadership "consists of one man who calls all shots and yes-people who tell him only what he wants to hear," Timur Kuran, Gorter Family Professor of Islamic Studies from Duke University, told Al Monitor. But, he said, they all see the horrendous economic mess that Erdogan has created. Kuran suggested that many in the party believe "the inevitable chaos will give them an opportunity to declare emergency rule and stay in power despite their rising unpopularity. If they end up losing power anyway, their successors will inherit a massive economic mess; and they themselves will go abroad, where they have parked billions derived through bribes and other forms of corruption.”

At this point, polls consistently show that whether Islamist, secular, or nationalist, the exhausted majority is fed up with nonsensical talk while their livelihood is dwindling each day. They are Erdogan’s most important roadblock to stay in power.

How is the Turkish public taking in the corroding values of truth? Zubeyde Sari, a seasoned journalist working for 23 Derece, an independent news outlet, told Al Monitor “For years I tried to report the voice of the streets. I fear a government’s worst act would be to be deaf about the public’s voices, and to stay distant from their demands. I fear that is precisely what AKP is doing now.”

Kuran agreed, “The AKP base includes people completely detached from reality because they get their news only from mainstream TV stations, which have all been coopted by the regime. … Yet, that brainwashed base is shrinking. Standing in bread lines is putting them in touch with reality.”

“Three, maybe four years ago, the dominant feeling we observed on the street was fear," Sari said. "Most people would refuse to engage with us, and would be hesitant to speak. Today, we observe that fear is replaced with anger. Before we even extend the mike, people loudly state they cannot make ends meet, they ask us ‘how many families would live comfortably for a month on the daily spendings of presidential palaces?’ Turkey is now an angry country."