A local Yazidi armed group linked to the Kurdistan Workers Party and affiliated with the government-incorporated Popular Mobilization Units has been targeted as part of stepped-up Turkish cross-border operations. 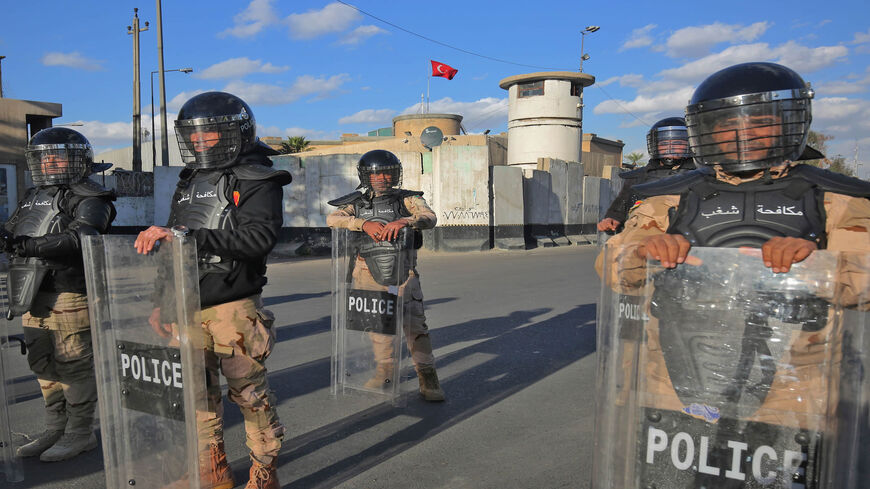 Iraqi riot police protect the Turkish Embassy in Baghdad after calls on social media to gather outside the embassy to protest Turkey's vows to invade the northwestern enclave of Sinjar, Iraq, Feb. 18, 2021. - Ahmad al-Rubaye/AFP via Getty Images

BAGHDAD — Turkey has targeted members of a local Yazidi armed group linked to the Kurdistan Workers Party (PKK) in northern Iraq and taken losses among its own forces stationed in the region.

The military commander of the local armed faction, the Sinjar Resistance Units (YBS), Marwan Badal, was reportedly killed by a drone strike on his car Dec. 7.

The counterterrorism directorate of the Kurdistan Region of Iraq called him a "commander of the PKK militias" in announcing the news.

Three Turkish soldiers deployed to areas of northern Iraq were then killed in an attack by the PKK on Dec. 9. Turkey has forces at multiple bases in northern Iraq, which borders Turkey’s southeast.

Northern Iraq also borders part of northeastern Syria under the control of the Kurdish-led Syrian Democratic Forces (SDF). The SDF is dominated by the Kurdish People’s Protection Units (YPG), often considered a local affiliate of the PKK. The PKK is officially designated as a terrorist organization by the United States, European Union and Turkey.

The SDF has been financially and militarily supported by the United States as part of its efforts to fight the Islamic State (IS). The YPG and the PKK often claim to simply be linked in ideology or other ways, but that they have separate command and control structures.

SDF commander-in-chief Mazloum Abdi claimed in a tweet following the Dec. 7 killing of the YBS commander that not reacting to these actions by Turkey “targeting civilians” would lead to “unprecedented massacres.” His tweet included photos of him and the now defunct Yazidi commander, both in military fatigues.

Abdi had been part of the PKK for decades prior to becoming SDF chief.

On the evening of Dec. 11, reports of an airstrike immediately assumed to have been carried out by Turkey on a YBS-linked center in Khanasor, the same part of Sinjar district in Iraq’s Ninevah province that Badal was killed in.

Khanasor is north of Mount Sinjar and close to the border with Syria. PKK fighters have long used routes in this area to cross from Iraq into Syria and vice versa.

Some Iraqi commentatorrs claimed the explosion had instead been caused by an improvised explosive device. Others reported that a number of casualties resulted including a “PKK commander who is a Turkish national.” As of publication, the cause of the incident was still unclear.

In recent months, PKK commanders have been targeted and killed by Turkey in SDF territory in northeastern Syria as well. In September, a key member of the PKK’s "executive central committee," a man known as Haydar Varto, was reportedly killed in Qamishli. He had been in the PKK since the 1980s, but had since 2019 reportedly been in Syria.

As part of ramped up efforts this year including cross-border operations into both Syria and nearby areas of northern Iraq, Turkey claimed to have killed over 200 PKK members in August alone. Several of these operations had been carried out in the Sinjar district.

While often considered essentially a local affiliate of the PKK, many of the YBS are now part of the Shiite-led, government-incorporated Popular Mobilization Units (PMU).

The plethora of armed groups operating in the Sinjar area - including the PMU, the PKK and the Iraqi Kurdistan's peshmerga security forces - has long been cited as a source of problems for the local Yazidi community.

An agreement reached over a year ago in an attempt to solve this issue has not yet been implemented.

The YBS are seen as having close links to Kataib Sayyid al-Shuhada and Asaib Ahl al-Haq.

A statement following attacks on Erbil earlier this year by groups linked to these Shiite Iran-linked "muqawama" factions notably stated that they target only “the American, Turkish and Israeli occupation bases,” implicitly warning Erbil about collaborating with Turkey against the PKK.

Social media accounts of “YPG veterans” and “international volunteers” openly talk about using irregular smuggling routes to cross the Iraqi-Syrian border near Sinjar. One recently claimed, however, “Iran certainly isn't moving supplies through Sinjar or Derik, half the time we can't even get stuff over those borders, and they have far better routes to the south.”

Turkey in recent years appears to have collaborated closely with Iraqi intelligence services in counterterrorism operations, enabling several highly sought IS affiliates and commanders to be found and captured.

Turkey sees IS and the PKK essentially as equally dangerous to it. The country has been involved in a decades-long brutal conflict with the PKK that has resulted in at least 40,000 deaths.

Attacks claimed by the PKK in Turkey have included many on educational facilities and Kurdish “collaborators,” including a highly publicized 1994 public square execution of six public school teachers in the Kurdish-majority town of Tunceli. Several attacks in recent years on schools in southeastern Turkey have also been attributed to the PKK, resulting in deaths of both staff and students. The Global Coalition to Protect Education identified, for example, 12 attacks on nursery, elementary and primary schools in 2016 linked to the armed group. These attacks included setting fire to the schools and planting bombs on their premises. State broadcaster TRT claimed in 2017 that the PKK had killed over 150 teachers in the country since 1984.

The PKK and the YPG have long focused on indoctrination of young people and make use of child soldiers. A Dec. 7 protest was held in Qamishli by the families of adolescents “kidnapped” by the armed group in control of the area. The protest was dispersed by the SDF security forces and several journalists trying to cover the protest were arrested.

Kurdistan Regional Government (KRG) officials have said that a major reason why there are still thousands of Syrian Kurdish refugees in the Kurdistan Region of Iraq is that they do not want to live under the yoke of the YPG and/or PKK or want to be subject to forced recruitment into their ranks.

Many KRG officials have also urged that action be taken to get the PKK out of Iraqi Kurdistan for the sake of security and the local economy.

High-profile figures from the Yazidi community, however, warn that members of their already suffering community should not bear the costs of regional conflict.

Thousands of Yazidis were killed or enslaved by IS and thousands more are still missing, years later. Many of the buildings and infrastructure in the district remain damaged or entirely destroyed.

Yazidi activist Mirza Dinnayi, who this week was given a Human Rights Award Special Mention from France as part of International Human Rights Day, had on Oct. 18 told Al-Monitor that “the majority of Yazidis are not supporting” any of the armed groups currently active in Sinjar district.

He stressed, “They do not want to be in conflict with any country. The PMU do not represent the Yazidi [community, as most instead] want to live within a state system and be supported by the state [with] rule of law, without being part of any militias.”