The Takeaway: Did Israeli PM help break deadlock over US weapons sale to UAE? 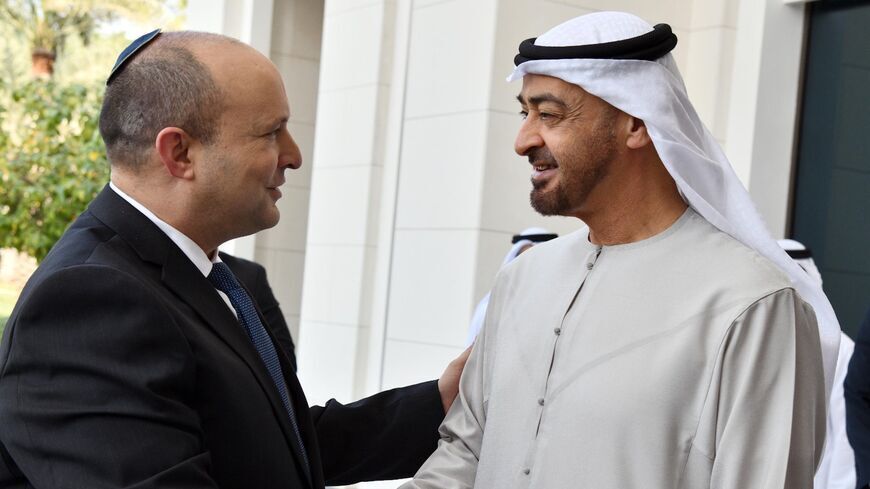 Moving forward: Less than 24 hours after The Wall Street Journal broke the story of how the United Arab Emirates threatened to pull out of a $23 billion weapons deal with the United States, US Secretary of State Antony Blinken said on Dec. 15 that the United States is prepared to "move forward" with the sale if the UAE is.

Israel’s edge: All sales of US weapons systems, especially premium products like F-35 fighter jets, go through a rigorous review to keep the most sophisticated US technology under tight controls. Arms sales to Arab countries have an additional test: They cannot challenge Israel’s "qualitative military edge" in the region. Blinken, in announcing that the Biden administration was prepared to go ahead with the deal, said "a full review" had been conducted of the package to assure Israel’s "QME."

Bennett offers an assist: The day before the UAE threat to withdraw from the arms deal, Israel Prime Minister Naftali Bennett met with Abu Dhabi Crown Prince Mohammed bin Zayed Al Nahyan (MBZ) in the UAE capital. And the conversation was not just about Iran and joint ventures to advance the Abraham Accords.

Ben Caspit has the scoop that Bennett "promised to lobby the United States to lift its freeze on the sale of F-35 stealth fighter jets to the UAE."

Background: Jared Szuba has the background here on the Donald Trump administration’s approval of the $23 billion arms transfer last year amid a push to convince the UAE and other Arab states to normalize ties with Israel. The Biden administration had been concerned about UAE ties to China with regard to the development of a port facility near Abu Dhabi, which has been halted, and the UAE’s contract with Huawei for 5G networks, but these issues are reportedly resolved. A UAE military delegation is in Washington this week for discussions at the Pentagon.

French connection: During a visit by French President Emmanuel Macron to Dubai on Dec. 3, MBZ signed a $19 billion deal for Dassault Rafale fighter jets and Caracal transport helicopters. A senior Emirati military officer said "this deal is not considered as an alternative for the forthcoming F-35 deal" with the United States.

Gilles Kepel, who accompanied Macron to Dubai, has the can’t-miss take on the latest On the Middle East podcast with Andrew (link here).

Our take: The UAE, which has taken an assertive and pivotal role in diplomacy in the Middle East and the Horn of Africa, and which took the initiative in normalizing ties with Israel, considers the US commitment to the weapons sale as a promise made to be kept, given the bilateral security partnership. The flurry of the last 24 hours, it seems to us, is more likely to advance the deal than to stall it.

Read more: Check out this CRS Report for background on the F-35 arms sale to the UAE and the background to the Israel QME requirement; the Abraham Accord documents; and UAE Minister and Ambassador to the US Yousef Al-Otaiba’s June 2020 op-ed warning of the impact of Israeli annexation of West Bank Palestinian territory on normalization with Arab countries.

As the UAE gears up to host the COP28 climate conference, the oil-rich Gulf state is — in the words of the Emirati climate minister — seeking to build “a strong economic case for climate action.” Like the UAE, Saudi Arabia is also aiming to be carbon neutral in the coming decades, and Saudi Crown Prince Mohammed bin Salman has rolled out a pair of “green initiatives” as part of that effort.

The humanitarian situation remains dire at the Poland-Belarus border, where thousands of Middle East migrants are languishing amid a standoff between Belarusian President Alexander Lukashenko and the European Union. Reporting from Idlib, Sultan al-Kanj spoke with Syrians who flew to Minsk in hopes of crossing the border into Poland. But rather than gain asylum in Europe, they ended up stranded in makeshift camps or scammed by smugglers. Read their stories here.

Israeli Prime Minister Naftali Bennett is ramping up efforts to boost Jewish settlement in the occupied Golan Heights. Haaretz reports that the pro-settlement premier has advanced the formation of a special committee that would have broad authority to accelerate construction in the Golan.

The move, which drew criticism for circumventing the standard planning process, is a nod to Bennett’s right-wing base and, as Mazal Mualem writes, reflects “the prime minister’s urgent political needs given his failure to mobilize public support since taking office some six months ago.”

As Egypt prepares to supply cash-strapped Lebanon with natural gas via a pipeline that runs through Syria, Cairo is seeking additional assurances from the Biden administration that the plan won’t run afoul of US sanctions targeting the Syrian regime and its backers. Egyptian Minister of Petroleum and Mineral Resources Tarek El Molla told Elizabeth Hagedorn that Egypt needs “a clear document that would exempt us or would clear us from any possible sanctions.”

The US State Department has said it’s working to address any sanctions concerns. Keep reading for more on how Syria’s involvement in the Arab Gas Pipeline project marks the latest sign of warming ties between Damascus and its neighbors.

Chinese Foreign Minister Wang Yi's recent trip to Ethiopia drew blowback in Egypt, which is locked in a bitter dispute with Addis Ababa over the Grand Ethiopian Renaissance Dam. Yi pledged to support Prime Minister Abiy Ahmed's government as its yearlong war continues with rebel fighters from the country's Tigray region. A former Egyptian ambassador to Beijing told Khalid Hassan that China isn’t choosing sides per se but is looking out for its interests in the East African country. Ethiopia is home to hundreds of Chinese companies with investments reportedly exceeding $1.5 billion.

Iran says it will blacklist alleged US-based human rights abusers whose actions demonstrate American hypocrisy. In his announcement, Iranian judicial official Kazem Gharibabadi cited “police brutality in the United States against people of color especially” and the killing of George Floyd. As Adam Lucente reports, such accusations from one of the world’s worst human rights abusers are nothing new. The supreme leader has previously tweeted using the hashtag #BlackLivesMatter.

In the latest episode of “Reading the Middle East,” Gilles Kepel speaks with Emirati columnist Sultan Sooud al-Qassem, whose new book, “Building Sharjah,” explores how the discovery of oil in Sharjah in the 1970s propelled the Emirati city onto the world stage. For more on Sharjah’s urban history, check out Kepel’s interview here.