Schisms within Hayat Tahrir al-Sham are widening as its leader shifts to convey a moderate image and eliminate more radical rival groups. 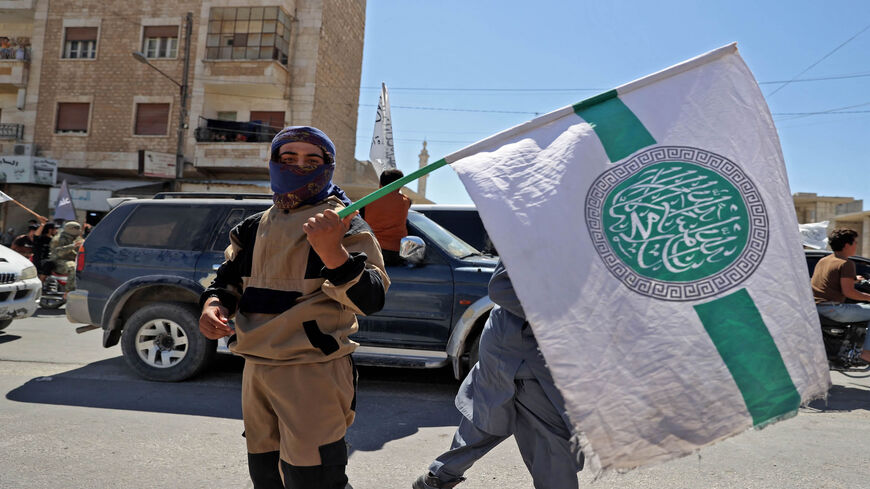 A member of Hayat Tahrir al-Sham holds the group's flag as others parade with their flags and those of the Taliban's declared "Islamic Emirate of Afghanistan" through the rebel-held city of Idlib, Syria, Aug. 20, 2021. - Omar Haj Kadour/AFP via Getty Images

Hayat Tahrir al-Sham (HTS) continues to split with rival jihadi groups, according to the classification of the segments supporting this group.

In justification of his decision, Ajaj argued that the Ministry of Justice “has become a puppet in the hands of HTS.”

He lashed out at the group’s leader, Abu Mohammed al-Golani, for selling the liberated areas without batting an eyelid. He also accused Golani of killing large numbers of opposition faction members. He noted that the number of those members Golani killed is manyfolds higher than the number of those he killed from among the ranks of the Syrian regime forces and its loyal militias.

The Ministry of Justice, which instead claimed he was dismissed, attributed his leaving to a failure to perform his judicial duties, and the neglect and indifference he showed by failing to abide by the official working hours. The ministry pointed to several complaints it received against him, whether by the heads of the courts in which he worked or by people who resorted to these courts, In a statement published Dec. 3, the ministry described his actions as “slander and defamation” against the judiciary, vowing to prosecute him before the courts.

Ajaj's defection falls within the framework of a series of defections by jihadi figures, including leaders and legislators, echoing the internal split on the general inclination espoused by the group. The reason for most of the defections can be traced back to two factors. The first is the separation of Jabhat al-Nusra Front from al-Qaeda. The second is the more pragmatic approach that Golani recently adopted, and his quest to rid HTS’ discourse of its jihadi character and abide by international agreements, especially the Russian-Turkish deal on the fate of Idlib.

HTS, which began as an Al-Qaeda affiliate, is designated by the United States and the UN Security Council as a terrorist group.

Golani, likely with Turkish backing, has launched a major initiative to recast his and HTS' image as a mainstream opposition group, showing up for an interview earlier this year in a  sporty jacket and  snappy haircut rather than clerical robes.  He has turned on more extreme jihadist elements within Islam while consolidating his own power.

A dissident from HTS, Abu Yahya al-Shami, said on Telegram, “Testimonies that prove the corruption and tyranny of the leadership of HTS will begin to come in. Only those who are satisfied with hypocrisy and tolerate it will remain with HTS or defend it. Every right seeker should see the truth, enjoin good and forbid evil before it is too late.”

Since HTS ended its association with al-Qaeda, Golani has sought to get rid of some of the group’s leaders, despite their main role in empowering it to the detriment of the opposition factions. He also fought his enemies, whether factions or individuals, to reach his goal of ruling Idlib and managing it militarily and civilly.

Orabi Abdul Hay Orabi, expert on jihadi groups affairs, told Al-Monitor, “The splits show HTS’ internal vulnerability and that there is a conflict of interests with the hard-line current within the group. Golani has departed from HTS’ ideological inclination. Corruption has been plaguing the group and some leading figures close to Golani have been monopolizing civil and military work, in addition to the escalation of arrest campaigns and oppression.”

He said that defections are likely to increase in the near future, especially by foreigners who are the solid core of HTS. “This will weaken the group, which may make it easier for other factions to eliminate it,” he noted.

Orabi added, “HTS fears the mounting popular anger in its areas of control in Idlib and its environs in northwestern Syria. This is amid a dire living crisis and HTS tight security grip on its internal military structure and civil administration represented by its Salvation Government. HTS is striving to exterminate any dissenting movement through arrest and exclusion.”

In mid-2020, HTS was forced to issue a decision banning all its leaders and members from leaving the faction before referring to the group’s supreme follow-up and oversight committee and obtaining a discharge from the concerned authority.

HTS also prohibited any defecting member from forming any group or faction or joining any faction before obtaining the follow-up committee approval, vowing to hold accountable anyone who violates this condition.

HTS warned that splits open the door to schisms within its ranks, weaken the mujahedeen, sow sedition and call for rebellion and disobedience. It described the defection as a violation of its general order, which prevents its affiliated members, regardless of their rank, if they insist on leaving, from forming new factions.

This decision followed the formation by a group of factions, on June 12, 2020, in the presence of former HTS leaders of an operations room, dubbed as “Be Steadfast.” The move was seen as a challenge to HTS by some of its former leaders.

Despite the impact of these splits on HTS' credibility toward its own popular base, and its classification today as an enemy of the jihadi movement, it managed to maintain internal cohesion in light of no external pressures on it.

Moreover, HTS has sufficient financial resources as it controls the crossings, not to mention its solid and cohesive nucleus represented by the leadership of Golani and the security leaders close to him. All this contributed to the strong central leadership that espouses a security approach to stay at the helm, even if this entails committing violations.

Defections, however, may have positive effects as new loyalties are taking shape based on new principles in line with HTS’ new inclination. After these splits, all its members will agree ideologically, and there will be no division within HTS. This will push new recruits who share the same ideology to join HTS.