Middle East sees most hostage-taking of journalists in 2021, report says

Reporters Without Borders said of the 65 journalists held by nonstate actors worldwide, nearly all were abducted in Syria, Yemen and Iraq. 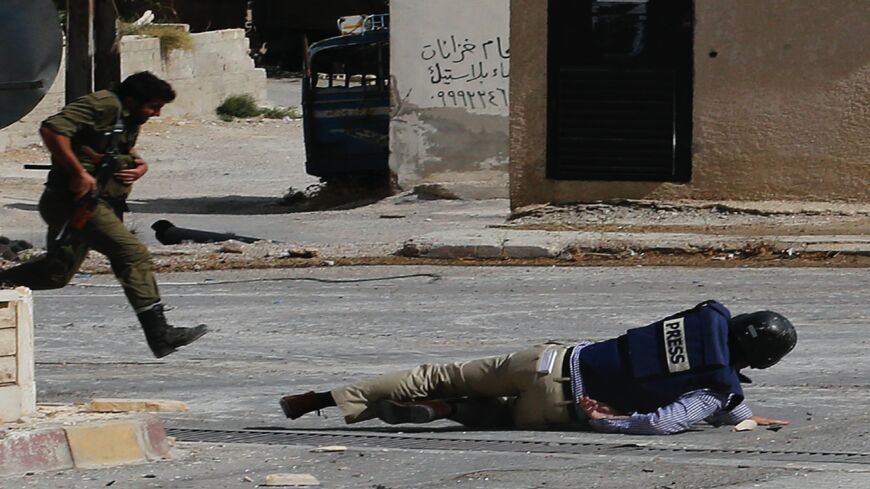 AFP reporter Sammy Ketz hits the ground as a Syrian soldier runs past during sniper fire in the ancient Christian Syrian town of Maalula, on Sept. 18, 2013. Journalists in Syria have been killed by snipers, accused of spying and kidnapped by gunmen, and with the threats growing, many say the conflict is now too dangerous to cover. - ANWAR AMRO/AFP via Getty Images

The advocacy group says at least 65 journalists and media workers are currently held by nonstate actors. Of them, 44 were seized in Syria, 11 in Iraq and nine in Yemen. Many are presumed dead.

The region recorded a rise in hostage-taking of journalists, although four Yemeni journalists were freed in 2021. American-born activist and self-styled journalist Bilal Abdul Kareem was released by Hayat Tahrir Al-Sham (HTS) after six months.

According to the RSF report, as of Dec. 1, 28 journalists had been abducted by the Islamic State in Syria and Iraq whose bodies have never been found. Today, RSF says the biggest threat to journalists in Syria is HTS, the US-designated terrorist group that controls Syria’s Idlib province.

Eight journalists are held by Yemen’s Houthi rebels, including four who were sentenced to death over accusations they spied for Saudi Arabia. Amnesty International previously described the charges against them as “trumped up.”

American freelance journalist Austin Tice, who was abducted at a checkpoint near Damascus in August 2012, remains missing. Little is publicly known about his whereabouts or well-being. In the final months of the Donald Trump administration, two US officials traveled to the Syrian capital for direct negotiations on Tice with the Syrian government.

Around the world, RSF observed a significant increase in the number of journalists detained due to their work. As of Dec. 1, 488 journalists or media workers were in prison, an increase of 20% from last year.

Saudi Arabia made the list of the world’s top five jailers of journalists, along with China, Vietnam, Myanmar and Belarus. The RSF roundup highlighted the case of Ali Aboluhoom, a journalist of Yemeni origin sentenced to 15 years in prison over tweets that Saudi authorities said were used to spread “ideas of apostasy, atheism and blasphemy.”

Endless trials are a common practice in Morocco, the report said. Editor-in-chief of the Arabic news site Lakome Ali Anouzla is not detained but has been waiting for the outcome of his terrorism trial for eight years.

RSF also registered a record high number of detained female journalists around the world. Sixty are behind bars for their reporting, a third more than were imprisoned in 2020. Iran has detained three female journalists, including Narges Mohammadi, who has accused her interrogators of sexual abuse.