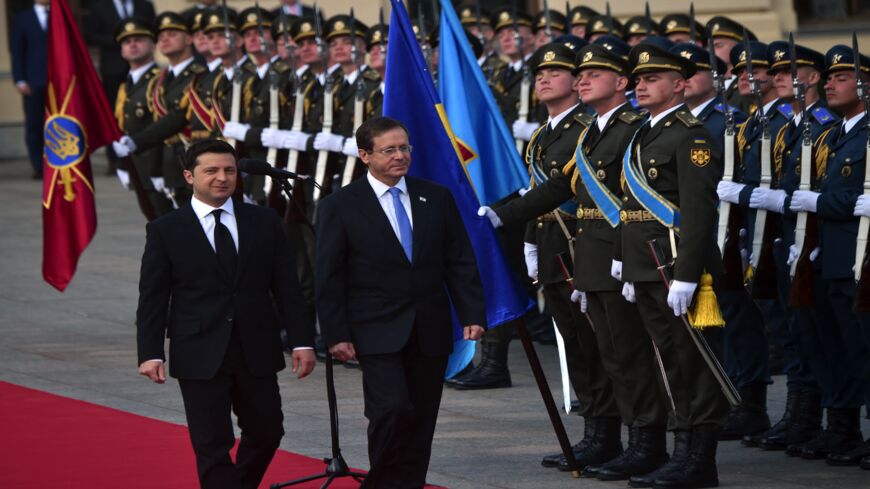 Ukrainian President Volodymyr Zelensky (L) and his Israeli counterpart, Isaac Herzog (C), review a guard of honor ahead of their meeting at Mariinskyi Palace in Kyiv on Oct. 5, 2021. - SERGEI SUPINSKY/AFP via Getty Images

The recent visit of Ukrainian Defense Minister Oleksii Reznikov to Israel took place with sparse media coverage at the request of the host country. Official statements only noted that Reznikov and Eyal Khulata, Israel's National Security Council head, discussed urgent security issues. According to some media reports, Israel asked the guests to be careful with public speeches and not to give interviews so as not to irritate the Kremlin once again. Moscow insists on urgent and legally enshrined guarantees of refusal to expand NATO and, through a new deployment of troops on the border with Ukraine, is trying to impose the parameters of a security system in Europe.

Unsurprisingly, Russia defiantly confuses defense policy and business when it comes to the post-Soviet space. An example of this are the Turkish-made Bayraktar drones, which the Ukrainian side has already begun to use in Donbass. Ankara has publicly emphasized the difference between the official line of the state and sales of military equipment, but Moscow is not convinced. Meanwhile, Ukraine needs to develop ties, strengthen its economic and military potential, and is not in submissive self-isolation due to the whims of the Russian leadership.

The Kremlin was initially unhappy with the victory of Volodymyr Zelensky in the presidential elections in Ukraine due to the fact that democracy won a victory over the administrative resource familiar in the Russian sense. Therefore, the course of active diplomacy in Kiev is doomed to irritate the Russian side. And whoever figured in the second element of the equation — representatives of the Israeli or Turkish defense industry — it is impossible to convince Moscow that the relevant contacts are developing within the framework of the business model.

There is a well-established point of view that gentlemen's agreements in the defense sphere have long existed between Russia and Israel: The Israeli side does not cross the "red lines" and does not intensify defense ties with Ukraine and Georgia. In exchange, Russia restricts military-technical cooperation with Iran. According to Ariel Bulshtein, a former adviser to ex-Israeli Prime Minister Benjamin Netanyahu, the Russian side at least twice blocked the relevant requests of Tehran.

Kyiv has long shown interest in acquiring Israeli military equipment, particularly UAVs and communications outfits. However, in 2014, a deal between Kyiv and Israel drones maker Aeronautics was blocked by Moscow, and since then Ukraine has not officially received any military-technical assistance from Israel. Even the fate of small contracts announced in 2014 for the supply of small arms — licensed copies of the Israeli Tavor family of shotguns — for the Ukrainian special forces is unclear.

This is despite the fact that in 2015, Putin lifted the ban on the supply of S-300s to Iran, which had been in effect since 2010. According to media reports, he then tried to convince Netanyahu that firstly, this decision would not threaten Israel's security, and secondly, the Israeli side should not supply arms to Ukraine as a reciprocal step on an equal footing. At the same time, the Ukrainian military has repeatedly shot down drones in the Donbas, for which the Russian side purchased components from Israel.

In general, Israel's recommendation to the Ukrainian minister not to draw undue attention to the visit and the topic of negotiations may be one of the indicators that in the Naftali Bennett era the previous agreements remain in force. However, there are nuances.

It is obvious that the place of Ukraine, which has gone through a series of political crises, in the system of Israel's foreign policy coordinates is gradually changing. The policy of expanding cooperation, despite a number of major scandals, started back in Netanyahu's cadence and is actively continuing under the new Israeli Cabinet.

An indicator of this transformation is the free trade agreement signed in 2019 on which the parties had been working for many years. At this stage, its main effect is more of a political nature. Countries are trying to enlist mutual support at the United Nations, and Israel, which has repeatedly voted for resolutions condemning Russia's annexation and temporary occupation of Crimea, is probably not afraid of Moscow's displeasure. Although Israel distances itself even from participating in the negotiation process on the Ukrainian track, the IDF military took part in the Sea Breeze-2021 exercises in Ukraine, which did not go unnoticed in Russia.

In 2019, the Ukrainian state Ukroboronprom and the Israeli company Elbit Systems Ltd signed a memorandum of cooperation in the field of communication systems, surveillance and modernization of armored vehicles. According to Ukrainian experts, the implementation of such an agreement will be a breakthrough in the modernization of Ukrainian military equipment and will lead to the launch of joint production of military products with their subsequent sale to third countries. Such production in Ukraine would be cheaper than in Israel.

Cooperation in the field of high technology and cybersecurity is of interest for both countries. This is due to the fact that, in view of the unstable situation in Belarus, it is becoming less and less profitable for Israelis to open offices there or entrust local specialists with project work in the field of artificial intelligence. In addition, Kyiv's plans to open an innovation center in Jerusalem are perceived as a signal of a future change in the location of the embassy, which Israel likes.

Israel is also one of the three countries from where the largest amount of funds is sent to Ukraine via money transfer systems. This is not only evidence of the ties between the two peoples, but also a political asset, which, by the way, Netanyahu tried to use to take votes from the Israel Our Home party, which is traditionally focused on the Russian-speaking segment of the electorate.

At the same time, there are those who believe that Israel is fulfilling some kind of military contracts, despite Moscow's position. Ambassador of Israel to Ukraine Mikhail Brodsky spoke about this indirectly, noting some shifts in this direction with "understandable" limitations. But there are many exporters of advanced weapons around the world, and the Ukrainian leader's vigorous interest in powerful military equipment is unlikely to be contained. Zelensky is giving the appropriate signal, demonstrating interest in obtaining new missile defense systems, in particular the Iron Dome.

It is possible that Zelensky, who has problems with the Biden administration because of Ukrainegate, sees Israel as a potential lobbyist for his initiatives in Washington. In turn, Bennett, for whom bipartisan support in the United States is extremely important, may take a more active position on the Ukrainian track. For Russia, this will mean a search for new anti-crisis solutions with a possible exchange for concessions in the Middle East.