Ethiopia's government has rejected calls for a cease-fire after routing Tigray rebels with the help of high-tech foreign drones. 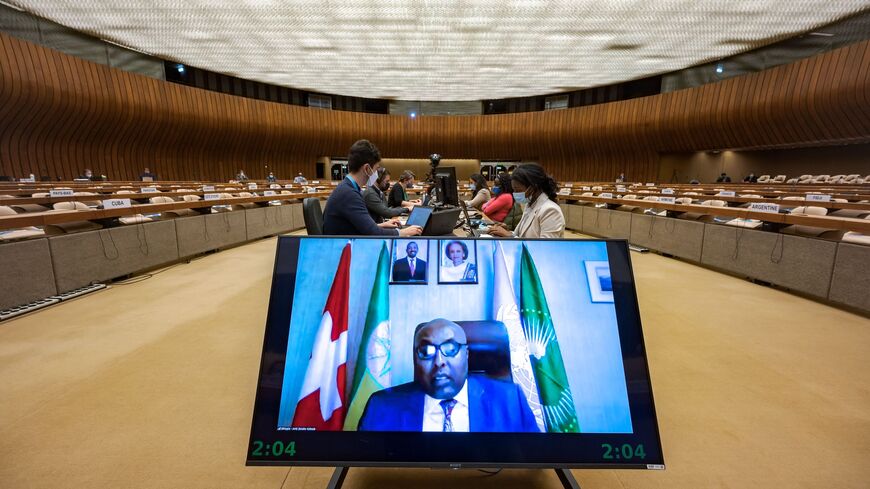 Ambassador and permanent representative of Ethiopia to the UN Zenebe Kebede (on screen) delivers a speech remotely during an extraordinary meeting on Ethiopia at the UN Human Rights Council in Geneva on Dec. 17, 2021. - FABRICE COFFRINI/AFP via Getty Images

The Biden administration has expressed increasing concern with foreign arms sales to Ethiopia amid the country’s brutal civil war, with particular focus on armed drones provided by Turkey and Iran.

The United Arab Emirates has also played a role in weapons shipments to the Ethiopian government during its war against a rebel movement in the country’s northern Tigray region.

Washington’s diplomatic point man on the Ethiopia crisis, Jeffrey Feltman, raised concerns over the arms transfers with both Turkish and Emirati officials during a tour of the region over the past week and a half, according to reports by Reuters and The New York Times.

Turkey has sold Addis Ababa dozens of Bayraktar TB-2 drones after the two governments signed a deal in August. The Times reported that the UAE also conducted strikes using Chinese drones on behalf of the Ethiopian military, a practice that halted in January under US pressure but has resumed in recent months.

US officials have also raised concerns with Ethiopian counterparts over Addis Ababa’s purchase and use of Iranian drones, Al-Monitor can confirm. In its response to the Biden administration, Prime Minister Abiy Ahmed’s government flatly denied obtaining the Iranian military hardware.

Ethiopia’s military has halted and reversed the rebels’ swift advances for now — due in part to the foreign arms transfers — but the conflict has been internationally condemned for widespread crimes against civilians on all sides. The yearlong war has killed thousands and pushed the country to the brink of mass famine.

The United States and United Nations have pressed both sides for a cease-fire even as Ankara and Abu Dhabi — two of Washington’s closest allies in the region — and Iran continued funneling arms to Addis Ababa.

The United Nations’ Human Rights Council voted last week to establish an independent investigation into the war’s abuses, including what it said were possible crimes against humanity. Ethiopia’s government has said it will not cooperate.

Why it Matters: The injection the armed drones and their decisiveness in Ethiopia’s civil war mark another sign of Washington’s waning influence in the Horn of Africa.

The Biden administration has prioritized the region for diplomatic and economic ties, but officials led by Feltman have had limited success.

In neighboring Sudan, military leaders led by Gen. Abdel Fatah al-Burhan orchestrated a coup in October, upending the country’s fragile transition to democracy just hours after a meeting with the American envoy in which Feltman urged all sides to stick to the democratic process.

Several Sudanese civilian leaders have since been released under US and international pressure, but the move was seen as a slap in the face to Washington’s efforts to reintroduce the country to the world economic stage.

Ethiopia’s prime minister has been similarly dismissive of pressure from Washington and debates have raged within the US administration about how to deal with his government.

What’s Next: The Biden administration has openly threatened economic sanctions against Ethiopian officials and others involved in prolonging the Tigray conflict, but has so far shied away from declaring Addis Ababa’s war effort a “genocide” — a move that would significantly restrict US ties.

The sanctions are set to take effect on Jan. 1 if moves toward a cease-fire are not taken, but don’t expect Washington to economically target its NATO or Gulf allies.

The drone sales suggest Abu Dhabi is poised to continue tipping the scales in regional crises regardless of the Biden administration’s preference for diplomatic resolutions.