These are the key takeaways on what the 2022 NDAA says – and doesn’t say – about US policy in the region. 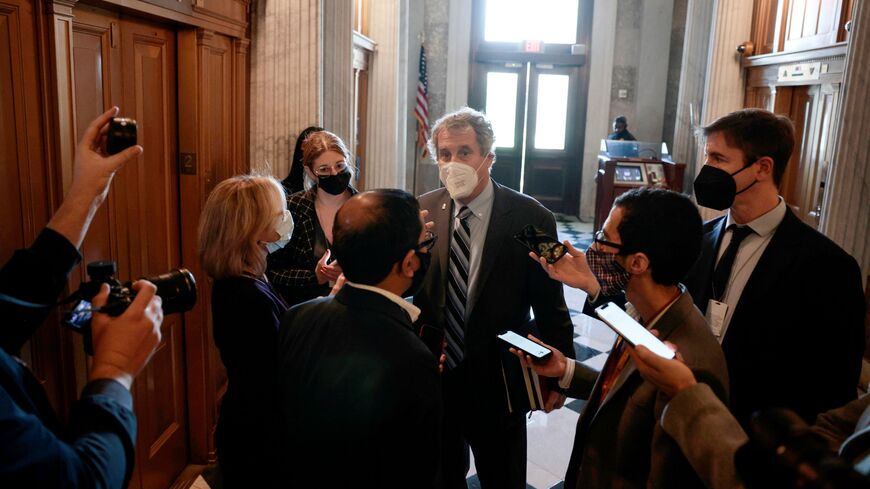 Sen. Sherrod Brown (D-OH) speaks to reporters outside the Senate Chambers of the U.S. Capitol Building on Dec. 15, 2021 in Washington, DC. The Senate voted to pass the National Defense Authorization Act, sending the bill to the desk of U.S. President Joe Biden. - Anna Moneymaker/Getty Images

US President Joe Biden signed next year’s $768.2 billion defense spending bill into law on Monday, giving his stamp of approval for an additional $24 billion over his administration’s original request.

Like its recent predecessors, the 2022 National Defense Authorization Act (NDAA) is largely geared towards preparing the US for strategic competition with China and Russia.

The law also includes key measures on cybersecurity, reforms to the military’s criminal justice system and establishes a commission investigating the failures of the war in Afghanistan.

But it also lays out new oversight on US policy in the Middle East – a sign that lawmakers have not forgotten about the region even as the Biden administration focuses elsewhere.

A number of measures on regional policy were stripped out in last-minute negotiations, though a few remain. Here’s a brief run-down:

The new restriction could pose a problem for US Africa Command, which bases its largest multinational military exercise – African Lion – out of Morocco every year.

Pentagon spokesperson Cynthia King told Al-Monitor that military officials will “consult and closely coordinate with the Department of State to ensure full compliance” with new measure.

Its inclusion marks a small win for the top Republican on the Senate’s armed services panel, Jim Inhofe (Okla.), who led a bipartisan push earlier this year against the Biden administration’s adoption of a Trump-era policy of recognizing Morocco’s sovereignty over the disputed territory.

The recognition was part of a tit-for-tat for Rabat’s agreement to recognize Israel last year. The current administration has shown no interest in reversing the move and appears to be relying on the UN to chart an equitable path forward.

Defense Secretary Lloyd Austin can bypass the prohibition if he demonstrates to Congress that the proscription would jeopardize US national security. Administration officials are required to brief lawmakers on the issue by March 1.

Syria and Iraq: Keen to avoid the mistakes of the Trump and Obama eras, the Biden administration has left more than 3,000 US troops in Syria and Iraq to plug the security vacuum following the war against the Islamic State.

But a few lawmakers have grown impatient with the apparently endless twilight of the conflict and lack of clarity on Washington’s stance towards Syria’s geopolitical stalemate.

Rep. Jamaal Bowman (D-NY) introduced an amendment earlier this year that would have forced the administration to withdraw troops from Syria absent explicit Congressional authorization.

That measure did not make it into the NDAA, but another introduced by the chair of the House Foreign Affairs Committee, Rep. Gregory Meeks (D-NY), did.

The 2022 defense spending law requires US Secretary of State Antony Blinken to submit a report on the administration’s vision for a political endgame to Syria’s conflict and on any diplomatic means to achieve those ends, including negotiations with Russia and Turkey.

Lawmakers also want to see plans for handing over local security responsibilities to the Kurdish-led Syrian Democratic Forces, the Syrian rebels of the Maghawir al-Thawra militia at al-Tanf and Iraq’s security forces across the border.

The law further mandates reporting on US diplomatic efforts to prevent Arab states from normalizing relations with the regime of Syrian President Bashar al-Assad, as Al-Monitor previously reported.

“As the Assad regime continues to subject civilians to siege-like conditions and the regime’s air force continues to batter residential areas, hospitals and clinics, it is now, more than ever, that we need clarity on US objectives,” Rep. Meeks told Al-Monitor in an emailed statement.

Meeks said he was “mindful” of the sacrifices made by the Kurdish-led Syrian Democratic Forces and other Syrian opposition groups backed by US forces in the campaign against ISIS.

“We must ensure US humanitarian assistance continues when and where it can to help those in need,” the chairman told Al-Monitor, adding, “Our US military presence ensures those credible partners are supported and any future plans account for remaining terrorist threats.”

Israel and the Eastern Mediterranean: The law sets up a Defense Department grant fund to support cybersecurity cooperation between the US and Israel.

It also aims to strengthen US support for Greece, Cyprus and Israel’s roles in the Eastern Mediterranean after recent years’ nadir in relations with Turkey over the S-400.

The law mandates Senate leadership appoint a group of up to six lawmakers to liaise with parliamentary counterparts from those countries in yearly meetings on regional security and energy issues.

What’s Missing: Earlier measures that would have ended the 2002 Iraq War authorization, required the administration to report on Egypt’s detention and harassment of US citizens, penalized Saudi Arabia over the killing of Jamal Khashoggi and further restricted support to the Saudi-led military coalition over its conduct in Yemen, were stripped out.

President Joe Biden praised the passing of the NDAA in a statement earlier this week, but objected to a handful of remaining measures, including one that continues a prohibition on US funding for the transfer of Guantanamo Bay detainees to US soil and to Somalia, Yemen, Syria and Libya.

The president, who has sought to close the detention center, urged lawmakers to lift the restrictions “as soon as possible.”

The White House also lamented measures requiring the reporting of what it called “highly sensitive classified information” to Congress, namely on US military intelligence shared with the Afghan Taliban and detailed descriptions of progress made by Iran’s military and its proxy militias in the region.

Such information “could reveal critical intelligence sources or military operational plans,” Biden’s statement said. The White House further implied that his administration may not fully reveal the requested information, but is willing to work with lawmakers to provide satisfactory answers to their questions.

What’s Next: The NDAA is a policy bill – it does not authorize spending. For that, Congress will need to pass an appropriations bill.

Defense Secretary Lloyd Austin raised the alarm earlier this month as the NDAA stalled in the Senate, saying that a stopgap funding measure would prevent the Pentagon from fully executing national security priorities.

Senate Appropriations chair Pat Leahy (D-Vt.) urged lawmakers to live up to their vocal support for funding the military in a statement earlier this week.

“Until we put our money where our mouth is and provide the funding we say we support, those words ring hollow,” Leahy said.

Know More: Read Al-Monitor’s coverage of the last-minute negotiations over the compromise NDAA.