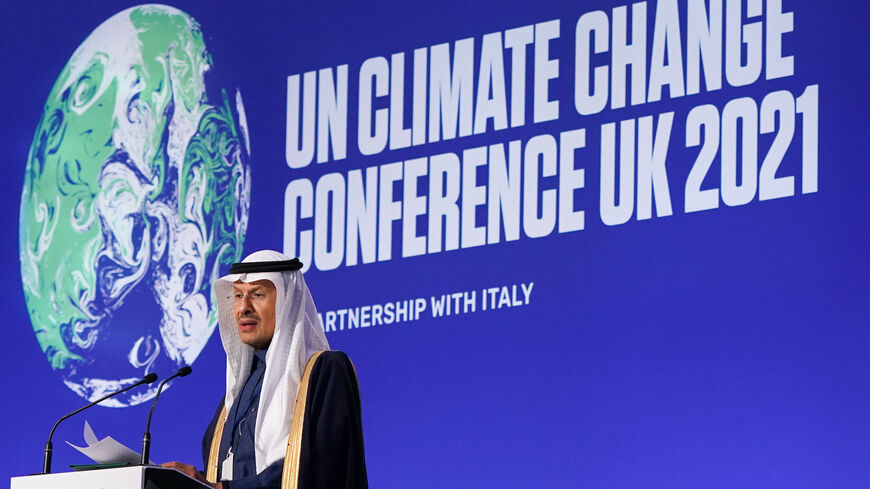 Saudi Arabia’s recent climate policies mark a dramatic reversal from the recent past, when the kingdom lagged behind world opinion on the causes and consequences of climate change, and what it might mean for energy producers.

Saudi Crown Prince Mohammed bin Salman, the kingdom’s de facto ruler, has launched two so-called “green initiatives” aimed at tackling climate change domestically and across the Middle East region. Riyadh has also followed the UAE in its pledge to be carbon-neutral by 2050, announcing a 2060 target.

According to Joanna Depledge, a Cambridge University researcher who has been following climate change negotiations since the 1990s, Saudi Arabia has toned down its past resistance to bold climate policies. In the past, she told Al-Monitor, "They have sought to delay the overall response, to stop others taking action, not just themselves."

Since oil produces 90 percent of Saudia Arabia's export revenues, it makes sense that the kingdom would not be a leader in calling for less production. Also, US leadership on climate is a recent phenomenon. The issue gained traction during the Obama administration, took a sabbatical during the Trump years, and is now a top priority for the Biden administration.

The crown prince's recent initiatives therefore seem a response to changing times. The researcher said it seems Saudi climate negotiators are "becoming more sensitive” to global climate initiatives, such as at the UN Climate Change Conference in Glasgow, she noted, in which Saudi Arabia participated.

As a sign of the oil-producing region's surging interest in more proactive climate diplomacy efforts, the UAE won the bid to host the UN Climate Change Conference COP28 in 2023. The Gulf country is already home to the International Renewable Energy Agency.

“We should expect to see an enormous amount of pressure on oil-exporting countries at COP28 because of the attention UAE will bring on fossil fuels production," Tom Evans, a climate diplomacy researcher at the European climate think tank E3G, told Al-Monitor. For the first time in the COP's nearly 30 years history, the term “fossil fuels” has been explicitly mentioned in the final statement of the 2021 United Nations climate conference in Glasgow.

Human activities, notably burning fossil fuels like oil, gas and coal, hold an "unequivocal" responsibility in increasing greenhouse gas (GHG) concentration in the atmosphere, according to experts. The transition away from fossil fuels therefore is a strategic question for Gulf countries and a priority for activists supporting policies to address climate change.

Critics argue Gulf states’ recent surge in interest in proactive climate diplomacy is cynical, driven by a push for nation-branding on the global stage to be viewed as respectable actors and secure a future for oil and gas by influencing climate negotiations.

The Gulf, and some energy experts, also understand that US-led climate initiatives are not the only trendline in global energy markets. There is little decrease in global demand for oil, including and especially in emerging markets.

And US President Joe Biden, a champion of climate policy, recently called on producers to increase, not decrease, oil production to address rising energy prices in the United States.

Since Qatar hosted the Middle East's first United Nations Climate Change Conference in the aftermath of the global financial crisis of 2008-2009, the low-carbon economy has demonstrated its viability. For example, the cost of energy generated by large-scale solar plants has plunged by 80% to become the cheapest electricity in history.

And green growth is no longer an illusion; it is associated with wealth creation. The world’s richest person, Tesla’s CEO Elon Musk, amassed a fortune with electric vehicles on a par with late oil tycoon John D. Rockefeller’s peak inflation-adjusted net worth.

The region’s attempts to engage more proactively in climate diplomacy is a reality test though.

“That would be a game-changing position if they stand up and say, 'We need to find a way to shift to a low carbon economy, and we are gonna champion that.' I know it is unlikely, but this is the direction Gulf states should be looking,” he told Al-Monitor.

Beyond addressing domestic emissions, Gulf states are betting on technology to tackle climate change. Saudi Arabia wants to generate 50% of its electricity from renewables by 2030, up from just 0.02% in 2019. Oil analyst and adviser to oil-producing governments Anas Alhajji told Al-Monitor that the region can take the technological lead on projects like capturing carbon dioxide before it enters the atmosphere; energy efficiency in internal combustion engines; desalination of water and fuels like hydrogen. Leveraging innovation is at the core of UAE’s push to combine strong economic growth and limited climate change.

“Green bonds are in”

In an apparent sign of regional cooperation over climate action, the Emirati special envoy for climate change met with the Saudi Arabian Minister of Energy at COP26 in Glasgow. “We will strengthen our bond as we work to reach our net-zero goals,” said Sultan Al Jaber.

But behind the scene, competition between the two largest Arab economies has escalated, and the quest for climate leadership is no exception.

In November, Saudi Arabia tried to block a UAE-brokered deal between Israel and Jordan to swap solar energy and desalinated water, sources with knowledge of the matter told American news website Axios. The deal caught Saudi officials “by surprise” and angered them because they felt it would “undermine” the crown prince's plans to lead the region on climate.

The signing of the agreement at Expo 2020 Dubai was reportedly delayed for several hours as “cosmetic changes” were added to the declaration's language to “appease the Saudis,” sources told Axios.

For Saudi Arabia, climate diplomacy is closely intertwined with economic development. The kingdom’s government and sovereign wealth fund both plan to look for buyers for green bonds to raise billions of dollars and finance part of the country’s diversification plans.

Interviewed by Bloomberg, US bank BNY Mellon’s chief executive of issuer services, Francis La Salla, said, “In the Gulf, and particularly in Saudi Arabia, there is a very keen awareness that in order to tap into global capital markets, you’ve got to think about green bonds.”