The new integrated complex for the production of methanol, ammonia and its derivatives in the industrial zone of Ain Sukhna, Egypt, aims to export its products with a production of one million tons of methanol and 400 thousand tons of ammonia annually. 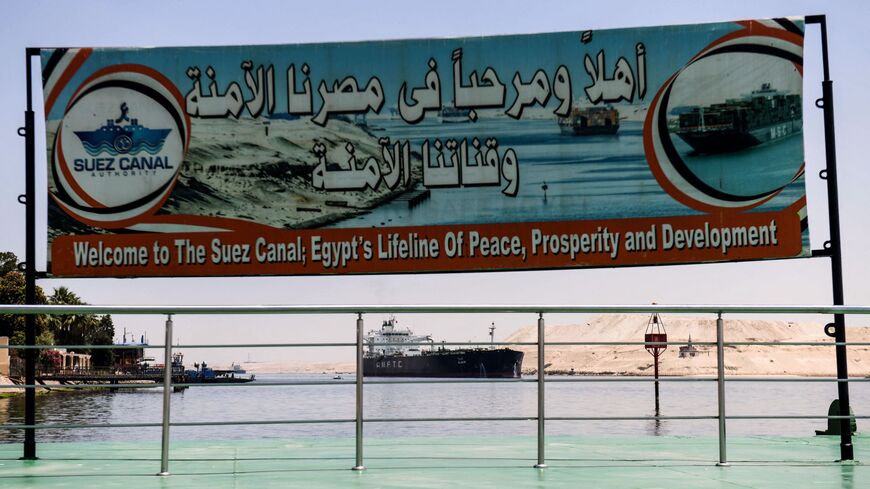 A welcoming sign is placed on the shore of the Suez Canal in the northeastern Egyptian city of Ismailiya, on May 27, 2021. - AHMAD HASSAN/AFP via Getty Images

Egypt’s General Authority for Suez Canal Economic Zone (SCZONE) has announced the signing of a contract to build the largest integrated industrial complex for the production of methanol, ammonia, and its derivatives at Ain Sukhna’s industrial zone.

In a phone call with Al-Monitor, the chairperson of SCEZone, Yehia Zaki, explained that the project falls within the framework of Egypt's plan to increase petrochemical exports. “The first phase is expected to be completed at an investment cost of $ 1.6 billion by 2025," he said. "The second phase, which costs $1 billion, will require three additional years. We announced the project for the first time last August. It aims to produce one million tons of methanol and 400,000 tons of ammonia annually.”

The project “will turn the zone into the main source of production of several petrochemical and petroleum products,” he said, furthering SCZONE’s strategy to localize the petrochemical industries.

Zaki explained that the project will be built on ​​two million square meters within the Main Development Company, including storage space of ​​50,000 square meters in Sokhna port to achieve the required integration between the industrial zone and the port.

The complex provides about 1,200 direct and indirect job opportunities, in line with the economic zone’s vision of providing 1 million jobs by 2030. “This is one of the goals that the General Authority aims to achieve in all its contracts and commitments with its partners,” he said. “The ongoing development works in Sukhna port contribute to the export of petrochemical products … from one of the keys and pivotal ports on the Red Sea.”

Saad Abu Al-Maati, chairman and managing director of Abu Qir Fertilizers Company and chairman of the International Methanol Company, was thrilled with the new deal. He described the project as a “giant industrial edifice” that reflects Egypt's current economic renaissance.

He praised Egyptian Minister of Petroleum Tarek El Molla for turning Egypt into a regional energy hub and achieving self-sufficiency in natural gas. “The project will boost the vital contribution of the Egyptian petrochemical industry to the Egyptian economy,” he told Al-Monitor.

The project is expected to begin operating in four years, Maati said. The Ain Sukhna zone was chosen because of its proximity to shipping ports and export markets for Southeast Asia and Africa, in addition to the customs and tax benefits offered by the Suez Canal Economic Zone.

Maati continued, “The project has high economic feasibility. Studies proved the global market’s need for methanol, which is a key part in several petrochemical industries and is largely used as fuel. Moreover, the project exploits the current emissions of carbon dioxide polluting the atmosphere and their interaction with ammonia to produce urea fertilizer. This makes it both economically feasible and eco-friendly.”