An Iranian advocacy group seized the opportunity of the UN climate change conference to highlight the plight of Iranian environmentalists facing pressure and prosecution under the Islamic Republic. 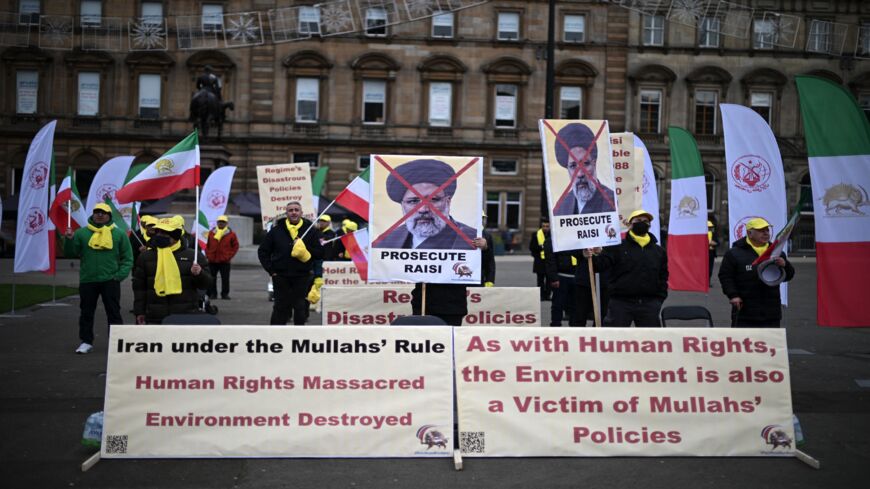 Demonstrators attend a demonstration organized by the Anglo-Iranian Community, supporters of the National Council of Resistance of Iran (NCRI), during the COP26 UN Climate Change Conference in Glasgow, Scotland, on Nov. 1, 2021. - DANIEL LEAL-OLIVAS/AFP via Getty Images

As world leaders convened in the Scottish city of Glasgow to discuss challenges and solutions on climate change, an Iranian rights group attempted to draw their attention to the hardships endured by environmentalists under the Islamic Republic establishment.

In a public letter to the summit participants, the group detailed how Iranian environmentalists are being “killed, detained and tortured” by the authorities. The committee urged the international community to mount pressure on the Iranian government to abandon those practices.

“The delegates from the Iranian regime who might attend the conference do not represent the Iranian people,” the letter said, adding that Iranian officials are destroying the country’s environment and should therefore “be banned rather than invited.”

In early 2017, the intelligence agency of Iran’s Islamic Revolutionary Guard Corps (IRGC) rounded up a group of prominent Iranian environmentalists in a high-profile case that drew unprecedented public fury. The IRGC leveled a range of allegations against the activists including “espionage” and “acting against national security,” charges that under the Islamic Republic’s judicial laws are punishable by lengthy prison terms and even the death penalty.

Only two weeks after his arrest, the senior member of the group, Kavous Seyyed Emami, died in custody under suspicious conditions. Iranian authorities explained the death of the conservationist as a suicide, a narrative strongly rejected by activists and his family.

The remaining eight members faced protracted trials for nearly two years. Despite their relentless refusal to plead guilty to espionage, the prosecutors pushed for the activists’ execution. The ultimate verdicts imposed a combined 58-year jail sentence on the group, who had repeatedly complained about different forms of torture and pressure during their imprisonment ordeal.

Among those initially arrested was Kaveh Madani, an internationally recognized water crisis expert who returned to Tehran from London upon a direct request from President Hassan Rouhani’s government to serve as the deputy chief of the country’s Department for Environment. Madani left Iran following a brief furlough granted to him during the investigation.

The environmentalists’ case also laid bare serious rifts within Iran’s establishment and the parallel intelligence organizations in particular. The country’s Intelligence Ministry in Rouhani’s moderate administration questioned the IRGC agents’ investigation and opposed the arrests, famously noting that the environmentalists had committed no act of espionage.

The IRGC, however, dismissed the Rouhani government’s stance, held on tight to the case and managed to elicit the hefty sentences from the hard-line judiciary, with which it maintains fundamental affinities.