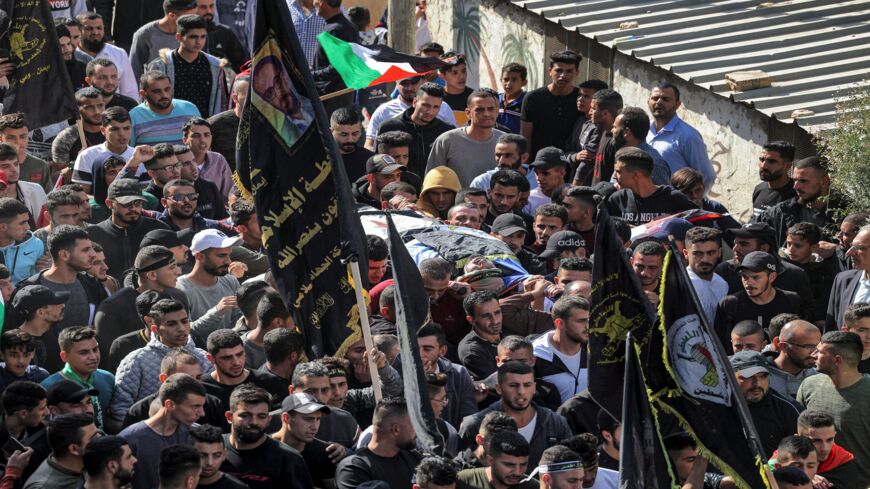 Palestinian mourners carry away the body of Saddam Bani Odeh, who was killed earlier amidst dawn clashes with Israeli troops, during his funeral in the village of Tammun near Nablus in the occupied West Bank on Nov. 16, 2021. The 26-year-old Palestinian died in hospital from a bullet wound to the lungs following the clashes on the road into the northern town of Tubas, as per the Palestinian Health Ministry. - JAAFAR ASHTIYEH/AFP via Getty Images

A Palestinian man was allegedly shot by Israeli forces today. The Palestinian Authority’s news outlet WAFA reported that Israeli forces killed Saddam Bani Odeh during an arrest operation in Tubas in the northeast West Bank. The Israel Defense Forces did not immediately comment on the incident.

There have been other violent episodes in the West Bank and Jerusalem recently. On Saturday, a group of Jews assaulted Arabs in the Ras al-Amud neighborhood of East Jerusalem, according to the Gaza-based news outlet Shehab. On Friday, unknown individuals threw stones and firecrackers at a vehicle in what one right-wing Jewish organization called a “lynching,” The Times of Israel reported. On Nov. 10, Israeli settlers allegedly shot bullets at Palestinian residents in Khallet ad-Daba’a in the southern West Bank, according to an article in the left-wing Israeli outlet +972 Magazine.

Attacks by Israeli settlers are not new and cause much tension in the West Bank.