Iraq diversifies arms imports after US withdrawal from Afghanistan

The US withdrawal may have spurred Iraq to consider purchases from Turkey and Pakistan, according to report by the Pentagon's Inspector General. 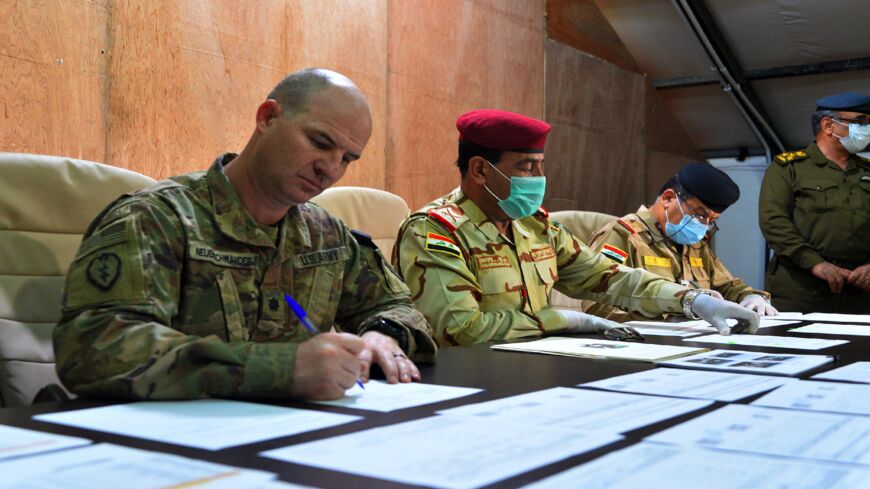 US Army Cmdr. Jace Neuenschwander (L) and Iraq Nineveh Operations Cmdr. Maj. Gen. Noman Zawbai (C) and Iraq's Staff Maj. Gen. Mohammad Fadhel Abbas sign documents during a handover ceremony at a base for the Combined Joint Task Force Operation Inherent Resolve (CJTF-OIR), the US-led coalition against the Islamic State, in Mosul in the northern Iraqi province of Ninevah during a handover ceremony to Iraqi forces on March 30, 2020. - ZAID AL-OBEIDI/AFP via Getty Images

The United States and NATO’s withdrawal from Afghanistan this summer may have encouraged Iraq's government to consider weapons purchases from Turkey and Pakistan, according to an unclassified US military intelligence assessment.

Despite assurances by US officials that coalition troops would remain in Iraq (transitioning to an advising role by the end of this year), officials in Baghdad sought to obtain combat aircraft and intelligence, surveillance and reconnaissance aircraft from Ankara and Islamabad, a new Pentagon watchdog report revealed.

Those capabilities are currently provided to Iraqi security forces by the US-led coalition to defeat the Islamic State (IS). The United States maintains some 2,500 troops in Iraq in the aftermath of the war against the jihadist group.

In September, Iraq and Pakistan reportedly reached an understanding for Baghdad to buy 12 JF-17 Thunder fighter jets from Islamabad. The purchase has yet to be completed.

Amid the chaotic US withdrawal from Afghanistan in late August, Saadoun also revealed Iraq was interested in buying Turkish Baktyar TB2 drones, T129 ATAK helicopters and KORAL electronic warfare systems. Baghdad expressed interest in those systems at least as early as last January.

In exchange, Iraqi officials asked their Turkish counterparts for increased flow of the Euphrates and Tigris rivers, which are dammed in Turkey, Al-Monitor previously reported.

Turkey’s TB2 drones proved their lethal worth with blistering effect on the battlefield during the brief but bloody Nagorno-Karabakh war between Armenia and Azerbaijan last year.

Iraq has struggled to maintain its fleet of American-made F-16s with spare parts in short supply and US contractors largely working remotely as the United States slowly defunds its contractor support.

Moreover, the Iraqi air force has continued to demonstrate “poor tactical control and coordination of strike assets,” the US-led coalition assessed in September, according to the latest Pentagon inspector general report.

Helicopters and drones, however, are more frequently used to support ground patrols as the Iraqi military seeks to rout out the remnants of IS cells in the country’s rural regions.

US officials have said they have no plan to withdraw all troops from Iraq. The 2,500 US troops in the country will be fully repurposed into a strictly advising role by Dec. 31, according to an agreement announced by President Joe Biden and Prime Minister Mustafa al-Kadhimi earlier this year.