Iran lashes out at Canada over UN rights resolution

A UN resolution condemning serious rights abuses by the Islamic Republic drew rage from Tehran, with a particularly harsh diatribe directed at Canada as the architect of the motion. 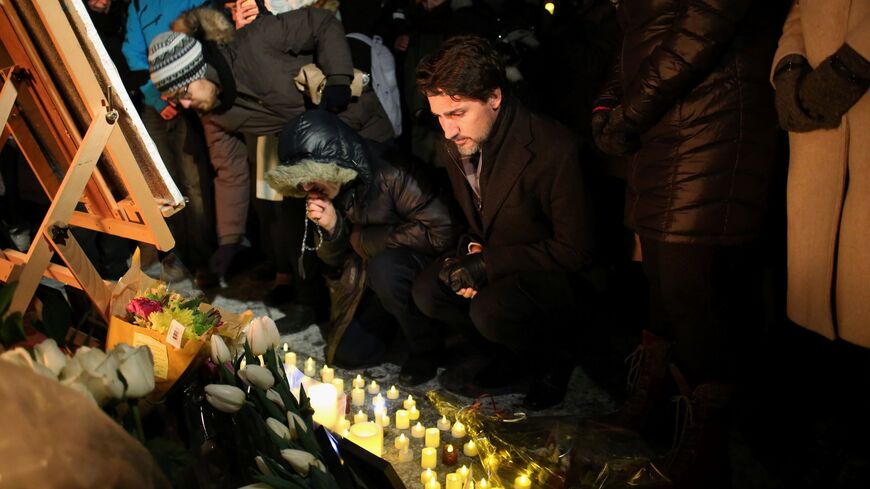 Justin Trudeau, Prime Minister of Canada, place a candle on Parliament Hill during a vigil for the victims who were killed in a plane crash in Iran on Jan. 9, 2020 in Ottawa, Canada. - Dave Chan/Getty Images

Iran’s Foreign Ministry issued a strongly worded statement of condemnation in response to a UN resolution that has raised alarm on human rights violations committed by the Islamic Republic.

The resolution discussed and passed by the General Assembly Third Committee expressed "serious concern at the alarmingly frequent use of the death penalty." It urged Iranian authorities to drop such sentences against child offenders.

Sending 246 convicts to the gallows last year, Iran was the world’s second top executioner after China. In defiance of international pressure, the autocratic establishment has defended the practice as implementation of divine rule.

The UN resolution also brought to light "arbitrary arrests" in Iran, calling on Iranian officials "to release persons detained for the exercise of their fundamental freedoms."

In his statement, Iran’s foreign ministry spokesman Saeed Khatibzadeh said the resolution was a repeat of "baseless claims" fed by “false information.” He questioned the "legal credibility" of the votes that he alleged were garnered “with political pressure and intimidation.”

The resolution was advanced by delegates representing Canada, whose ties with the Islamic Republic have been deteriorating for nearly a decade. The committee meeting turned into a ping-pong of harsh exchanges between Iranian and Canadian delegates.

And in Tehran, Khatibzadeh attacked the Canadian authorities for their "addiction" to "discrediting" the Islamic Republic, advising them to abandon "the systematic policy of genocide" against "Canada’s indigenous population."

In 2012, the Canadian government, led by former prime minister Stephen Harper, severed ties with the Islamic republic, closing its embassy in Tehran over the latter’s support to the Syrian government as well as its threats against Israel. Iran accused the Harper government of acting under pressure from its No. 1 enemy, the Jewish state in Tel Aviv.

A new tension was introduced into the already strained ties in late 2019. Iran’s Islamic Revolutionary Guard Corps shot down a Kiev-bound Ukraine International flight, killing all 176 people on board, the majority of them Iranian-Canadian dual nationals.

The Canadian government has been at the center of international efforts — though with no tangible progress — to hold Iranian authorities accountable for the tragedy. Tehran has accused Canada of overstepping its limits and "politicizing" the matter.