Canada's new Liberal prime minister has expressed an interest in changing policy toward Iran — but will rapprochement happen any time soon? 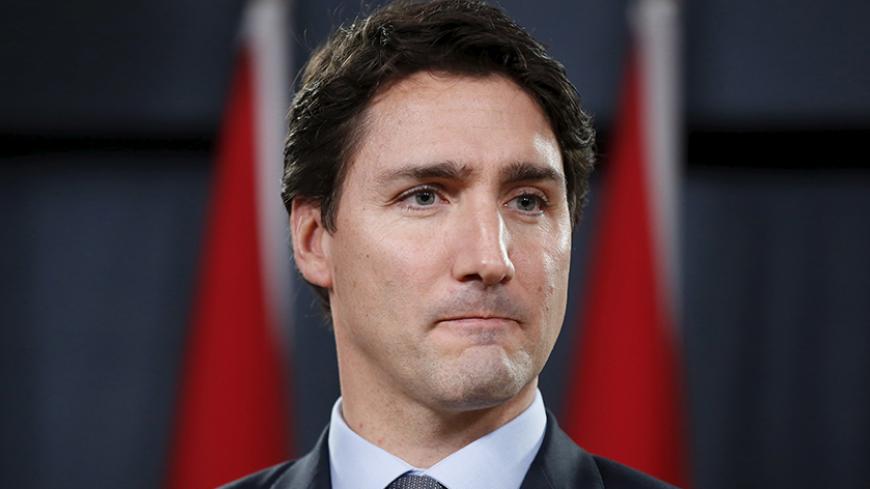 TEHRAN, Iran — Canadian Liberal Party leader Justin Trudeau defeated the incumbent Conservatives on the back of promises of change on Oct. 19, after nearly a decadelong rule by former Prime Minister Stephen Harper. Among Trudeau’s most significant campaign pledges on foreign policy was political re-engagement with countries such as Iran, which had seen deteriorating bilateral relations under Harper.

On Sept. 7, 2012, Canada’s then-Foreign Affairs Minister John Baird made the unexpected announcement that diplomatic relations with Iran would be cut at a news conference in Russia. The Conservative government cited Iran’s failure to protect Canadian diplomatic personnel, support for the Syrian government and stance toward Israel, among other issues, to justify the move. However, last year, national broadcaster CBC revealed the findings of an internal investigation into the safety of Canadian diplomats in Tehran. The probe’s results were in stark contrast with the assertions of Harper’s government; it outright concluded that there was no tangible threat against Canadian personnel stationed in Iran. Professor Dane Rowlands, who directs Carleton University’s Norman Paterson School of International Affairs, told Al-Monitor he believes the “largely symbolic act” of cutting diplomatic ties was not in the interest of Ottawa. “To close an embassy except under extreme circumstances is, I think, an admission of diplomatic failure,” Rowlands told Al-Monitor.

Over the more than half a century that Iran and Canada have had formal relations, both sides have withdrawn their ambassadors at different times and also refused each other’s nominees as envoys on occasion. However, the cutting of all diplomatic relations had until 2012 been unprecedented. Tehran and Ottawa maintained their political ties even after the “Canadian Caper” of 1980, when Canadian Embassy staff in Tehran came to the aid of six US colleagues who had escaped the takeover of the American Embassy.

Canada’s decision to cut diplomatic ties with Iran came amid heightened tensions between Tehran and Washington, and genuine concerns about a possible military confrontation between Iran and the United States. Rowlands told Al-Monitor he believes the timing of the Harper administration’s move was “irresponsible,” given the potential for “miscommunication and misinterpretation.” Rowlands added, “Closing an embassy both removes the means for clarification of intentions as well as represents an overreaction that can lead to serious miscalculation.”

Following the announcement of the Oct. 19 election results, the Iranian Foreign Ministry welcomed the victory of the Liberal Party and expressed hopes that it would translate into an end to Canada's "extremist policies" toward the Islamic Republic. Iranian parliament Speaker Ali Larijani was also quoted by local media as saying that Tehran should hold bilateral dialogue with Ottawa to "clear up a number of misunderstandings." Yet despite Trudeau’s promise of re-engagement with countries such as Iran, some experts believe that the resumption of political ties is not a pressing issue for either country — at least for now.

Pointing to the fact that Tehran is not a key trade, investment or security partner for Ottawa, James Devine, assistant professor of politics and international relations at Mount Allison University, told Al-Monitor, “On the Iranian side, there is less need for better relations with Canada. Tehran had previously seen Canada as a gateway to better relations with the West. However, since the July 14 Joint Comprehensive Plan of Action [JCPOA] was signed, relations between Iran and the Europeans have improved significantly. I don’t think Canada is as important to Tehran as it once was.” Adnan Tabatabai, a Berlin-based Iranian political analyst told Al-Monitor, “Iran-Canada relations have not been essential for either side. It is rather the presence of Iranians traveling back and forth to Canada that connects these two countries."

An Iranian international relations expert who spoke to Al-Monitor on condition of anonymity said he believes that despite Ottawa’s expressed desire to resume engagement with Tehran, Canada may find that Iran is not very interested in resuming ties — at least for now. “Since the Joint Comprehensive Plan of Action was signed, trade and political ties with European countries have either expanded or are in the process of expansion. With Canada, Iran appears to have less incentive and interest to reopen relations,” he said.

Professor Piotr Dutkiewicz, director of Carleton University’s Centre for Governance and Public Management, said there are four key drivers that can play a significant role in improving ties between Canada and Iran. Dutkiewicz, who met Larijani in the Russian city of Sochi in late October, told Al-Monitor that the first step for Trudeau’s administration should be “to break with Mr. Harper’s past and harmful policies and tune up with US/European Union’s new phase in relations with Iran.” As many officials and experts have previously warned, Dutkiewicz also told Al-Monitor he believes “a lot of patience, tolerance, time and effort” will be needed for relations between Iran and Canada to be fully normalized.

Meanwhile, Dutkiewicz stressed that the sizeable Iranian expatriate community in Canada can play a major role in this process, through active lobbying with the Liberal government to “devise concrete, transparent, quick policy measures to improve relations with Iran.” Asked about the possible consequences of such a rapprochement, Devine of Mount Allison University told Al-Monitor that it would be “symbolically important for both countries.” In Devine’s telling, for Canada, the latter would signal a change in its foreign policy toward its more traditional style of diplomacy, while for Iran, it would be a “further signal of the country’s intention to end its isolation and show its commitment to normalizing relations with the West.”

While it remains to be seen how Trudeau’s Liberal government will try to reclaim Canada’s lost role in the international arena and re-engage with countries such as Iran, it may be that the Islamic Republic — which has been a frequent host of many diplomatic and business delegations since the signing of the JCPOA — has the upper hand in setting conditions on how and when to resume diplomatic ties with Ottawa.