In the last week of October, Iran sent back more than 28,000 Afghans who fled across the border. 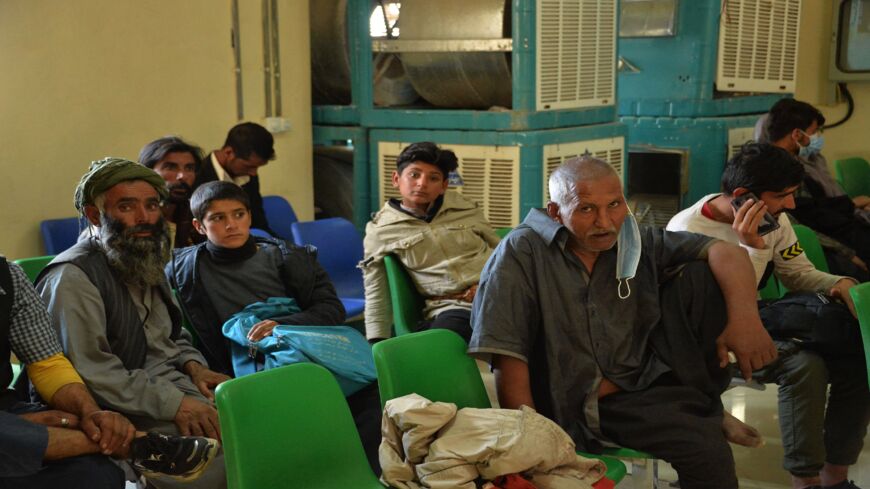 In this picture taken on Oct. 19, 2021, Afghans who were forcibly deported back from Iran to Afghanistan wait in a refugee office at the border between Afghanistan and Iran in Islam Qala port. Iran is sending tens of thousands of Afghan migrants back to Taliban-ruled Afghanistan every week despite the threat of famine, aid agencies and witnesses say, with many Afghans alleging they have been mistreated by Iranian authorities. - HOSHANG HASHIMI/AFP via Getty Images

Iran is deporting thousands of Afghan refugees who fled the Taliban, including more than 28,000 in the last week of October, the UN’s migration agency said.

The International Organization for Migration (IOM) said Thursday that Iranian and Pakistani authorities have sent back more than 1 million Afghan migrants this year, as others are still trying to escape the conflict-ridden country. The IOM told Agence France-Presse that at least 3,200 unaccompanied children had returned from Iran this year.

“The majority were deported, returning to Afghanistan often broke and broken, in need of health support, food and rest,” IOM director general Antonio Vitorino said in a statement.

“The task of reuniting with family and reintegrating into communities — especially for those who have been in Iran or Pakistan for years — is tremendously difficult considering the high levels of unemployment and food insecurity,” Vitorinot added.

Iran shares a 900-kilometer (560-mile) border with Afghanistan. Following the chaotic withdrawal of US troops in late August, the Iranian government offered Afghan civilians temporary shelter in three provinces along its eastern border. It later closed the border to Afghans arriving without the correct documentation.

Decades of conflict, natural disaster and widespread poverty in Afghanistan have created what the United Nations estimates is the third-largest displaced population in the world. Ninety percent of those who fled Afghanistan are now living in Pakistan or Iran, which hosts some 3.6 million Afghans.

The insecurity and violence spawned by the Taliban’s sweeping victory have compounded the displacement crisis. The Norwegian Refugee Council said Wednesday that some 4,000 to 5,000 Afghans are fleeing to Iran each day using informal border crossings, with as many as 300,000 having reached Iran since the insurgents’ takeover.

The aid agency warned the numbers are expected to rise by hundreds of thousands as Afghanistan’s harsh winter approaches and its humanitarian crisis intensifies.