Egypt is in talks with Somalia on water management aid for the drought-stricken country as Cairo builds up its influence in the Horn of Africa. 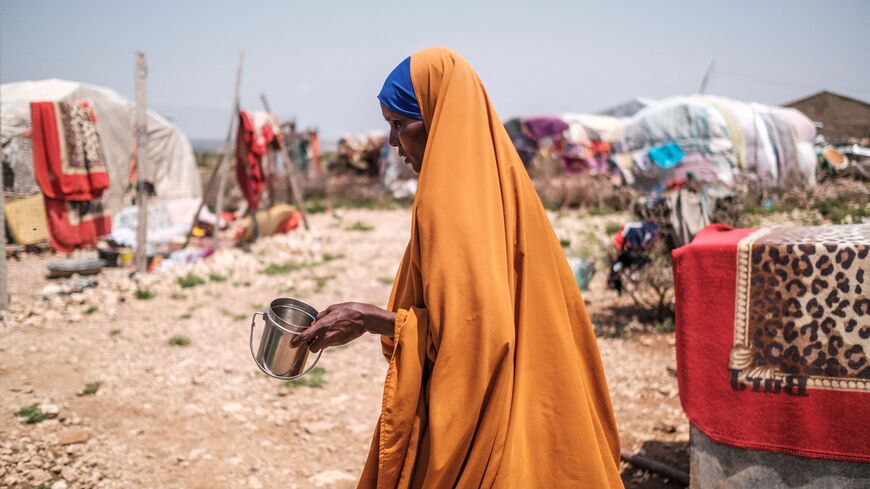 Yurub Abdi Jama, 35 years old and mother of eight children, walks while holding a cup in an informal settlement of internally displaced people in the outskirts of the city of Hargeisa, Somaliland, on Sept. 16, 2021. - EDUARDO SOTERAS/AFP via Getty Images

Egypt hosted a Somali delegation led by Minister of Agriculture and Irrigation Said Hussein at Cairo Water Week, an annual event to discuss policies for water-scarce nations on water management and strategic planning.

Hussein held talks Oct. 25 with Egyptian Minister of Irrigation and Water Resources Mohamed Abdel-Ati to discuss water cooperation between Egypt and Somalia including Egyptian support for Somalia to build dams and develop irrigation systems in the Horn of Africa country, which is ravaged by drought.

Somalia is one of the worst affected countries by climate change, with erratic rainfall, extreme temperature and prolonged droughts. The country’s average temperatures are some of the hottest in the world, interrupted by brief rainy seasons. The Somali economy is predominantly agricultural.

Somali Ambassador to Egypt Elias Sheikh Omar said his country was looking for Arab and African support to deal with its drought crisis.

“Somalia desires stronger relations with Egypt, particularly in the fields of agriculture and fisheries to serve the interests of both the Egyptian and Somali peoples,” the diplomat said on the sidelines of Cairo Water Week.

Abdirahman Ahmed Omar, a Somali researcher in water resources and urban planning, said all rivers and tributaries in Somalia originate in the Ethiopian Highlands. He explained Somalia has two major rivers: the Juba and Shabelle, both of which originate in Ethiopia, but "Somalia has much less rainfall than its neighboring countries Ethiopia and Kenya,” making Somalia highly dependent on the rivers for water.

Abbas Sharaki, a professor of geology and water resources at Cairo University, said water projects are a main field of cooperation between Egypt and Somalia.

“Somalia is located in the Horn of Africa, where the strategic Bab al-Mandab Strait is the gateway to the Red Sea and the Suez Canal,” he said. “Somalia is also a next-door neighbor to Ethiopia, the main source of the Nile water,” he said.

Egypt and Sudan are engaged in a decade-long dispute with Ethiopia over its controversial Grand Ethiopian Renaissance Dam on the Blue Nile, a main tributary to the Nile River.While Ethiopia sees the GERD as key to economic development, Egypt fears that the hydroelectric dam project will drastically reduce its water share from the Nile River, the country’s only source of fresh water.

Cairo and Khartoum have been pressing for a legally binding agreement on the rules for filling and operating the GERD, but Addis Ababa has resisted.

Egypt has carried out a series of projects in Africa as part of efforts to expand its influence in the continent and protect Egyptian interests there.

Egypt has carried out a series of projects in Africa as part of efforts to expand its influence in the continent and protect Egyptian interests there, such as a solar energy plant  in Uganda's Tororo district, a dam in Tanzania's Rufiji Riverand wells in South Sudan. The two countries also signed a cooperation protocol to manage flooding in South Sudan.