Cairo is working to persuade the Biden administration to keep the US-led Multinational Force and Observers in the Sinai Peninsula. 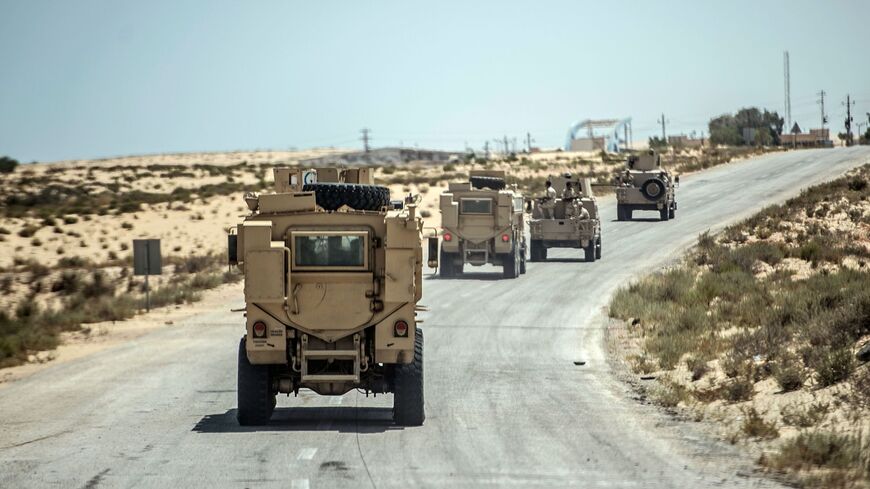 Egypt is trying to persuade the Biden administration to keep the US-led Multinational Force and Observers in the Sinai Peninsula near the border with Israel even as the United States reduces its military presence in the Middle East.

The United States seems to be focusing its priorities and resources on East Asia to face the mounting challenges presented by China. After previous administrations had tried to reduce US military expenditures in the Middle East, the US withdrawal from Afghanistan shows that the Biden administration is actively reshaping foreign policy.

The MFO was established in 1982 with US support to supervise the demilitarization in the Sinai Peninsula under the peace treaty signed between Egypt and Israel in 1979. The MFO currently includes more than 1,000 soldiers of different nationalities, including Australia, Canada and France. US forces make up 40%.

Shoukry’s remarks came in response to a question during a panel organized by the Wilson Center on Nov. 9, on the sidelines of the Strategic Dialogue between Egypt and the United States.

Shoukry said, “Despite the fact that the peace has been stable for the last 40 years, and there has really been no need for a direct intervention by the force and even its monitoring mechanisms," adding that it is "a matter of respecting the agreement, the peace agreement, that was forged between us and thereby our absolute commitment to it in all its aspects and not in any way diverting from it."

Zack Gold, a research analyst in the Center for Naval Analyses' Countering Threats and Challenges Program, told Al-Monitor that there is tension between the State Department, which sees its MFO treaty obligations as a linchpin of the greatest US achievement in the Middle East, and the Defense Department, which seeks to focus US resources on strategic priorities.

Mark Esper, the secretary of defense in the administration of former US President Donald Trump, led a campaign in 2020 to withdraw his country's troops from the peacekeeping forces in Sinai to reduce the costs of US military operations around the world. The plan was met with strong opposition from both Israel and the US State Department.

Yezid​ Sayigh, a senior fellow at the Malcolm H. Kerr Carnegie Middle East Center, told Al-Monitor that talk of an MFO withdrawal has arisen numerous times over at least the past two decades, but both Egypt and Israel have preferred to keep the MFO, particularly the US contingent, as a sign of US commitment as well as an added and independent assurance. "I expect this to continue," he said.

Israel has repeatedly warned against proposals to reconsider the structure and deployment of these forces, saying that dismantling these forces would encourage extremists active in the Sinai Peninsula.

For years, Egypt has been dealing with extremist Islamist groups in North Sinai. These groups escalated their operations against the Egyptian army after the overthrow of Islamist President Mohammed Morsi in 2013 in the wake of mass popular protests.

Since February 2018, the Egyptian forces, including the police and the army, have conducted large-scale operations against terror groups across the country, especially those stationed in North Sinai, where a branch of the Islamic State is active. These operations produced hundreds of casualties among civilians and the military.

Mohammad Hassan, who focuses on military affairs at the Egyptian Center for Strategic Studies, told Al-Monitor that it is important for Egypt to maintain the multinational force in Sinai as assigned by the security provision of the peace agreement signed with Israel.

Hassan added that a goal of the peace agreement is to ensure a demilitarized buffer zone between Egypt and Israel in the Sinai Peninsula to reduce the possibilities of military clashes.

Hassan added, “The peacekeeping force still plays a vital role in implementing the agreed-upon security system, especially after the regional security environment has changed as well as the security and defense requirements for Cairo and Tel Aviv.”

Hassan said that if the United States decides to withdraw its forces from Sinai, Egypt and Israel have direct channels of communication to prevent technical and political obstacles to needed security amendments, according to the changing security requirements in the region.

Since Egyptian President Abdel Fattah al-Sisi took office in 2014, there has been security coordination and cooperation between Cairo and Tel Aviv as part of Egypt's military operations against extremist elements in Sinai. Egypt and Israel agreed Nov. 8 to amend one of the security provisions to boost Egypt's military presence in the eastern border area of ​​Rafah.

Gold said, “Despite current mutual interests and Sinai security coordination, a culture of peace does not exist between Egypt and Israel. This perpetuates an overall lack of trust.”

“The continued presence of the MFO gives Israel peace of mind in allowing Egypt to maintain forces as it has in Sinai, above treaty limits, since 2011. Without the MFO, Israel probably would demand Egypt stick to its treaty limits, even though both countries view it as in their interest to maintain a higher Egyptian security presence in North Sinai,” Gold added.

Sayigh said that the Biden administration's evident wish to cement relations with the Sisi administration means the status quo will remain and Biden will retain the MFO just as Trump did.

Sayigh, concluded, "I don't think that the rise or decline of specific challenges such as the IS threat determines the outcome, there are other potential threats such as the renewed conflict in Gaza."