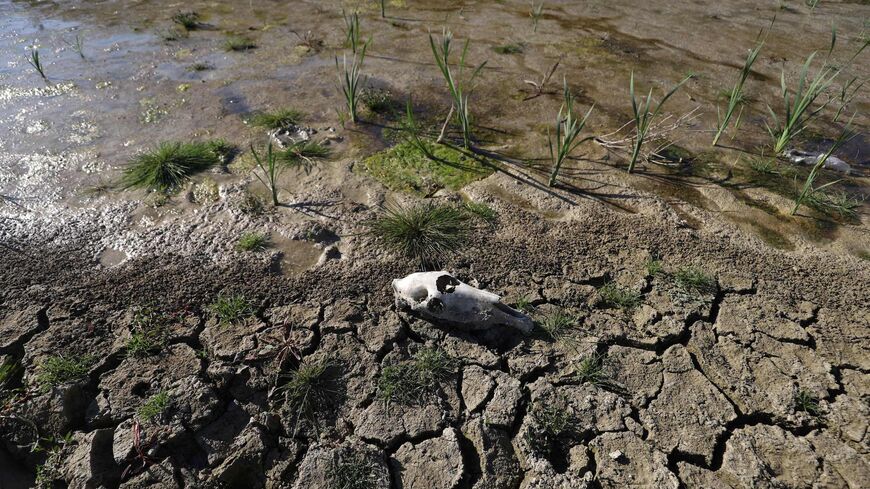 Drought has left very little water in the Duwaisat dam outside the town of al-Diriyah in Syria's northern Idlib province in this image taken Nov. 9, 2021. - ABDULAZIZ KETAZ/AFP via Getty Images

ALEPPO — Syrians in opposition-controlled areas in northwestern Syria are watching in alarm as groundwater levels drop, threatening their main source of drinking water and irrigation.

A decline in rainfall in 2020 and this year's drought have dried up the Duwaisat Dam Lake in the Jisr al-Shughur area in the western countryside of Idlib governorate, which is under the control of Hayat Tahrir Al-Sham (HTS), a first since the dam was established nearly three decades ago.

Mohammed Nehmeh Amhan, head of the Investment Department at the Ministry of Agriculture and Irrigation in the HTS Salvation Government, told Al-Monitor that the reservoir “normally irrigates 300 hectares of orchards and fields where farmers planted fruit trees such as pomegranates, peaches, olives and peaches, in addition to vegetables of all kinds.”

He lamented that the reservoir fell significantly in 2020 and even more dramatically in 2021. It could "only irrigate 1,500 hectares of orchards and fields before it completely dried out.”

“We periodically carry out the necessary maintenance for the dam and the network as well as we can, and we stopped pumping water for irrigation on Sept. 15. We, the Ministry of Agriculture and Irrigation, appeal to [other governmental] bodies and humanitarian organizations to provide the necessary support to rehabilitate the irrigation network,” he added. The area's irrigation lines are notoriously old and leaky.

Zaher Hashem, a journalist in Gaziantep who focuses on environmental issues, told Al-Monitor, “The drought that has stricken the Duwaisat Dam Lake poses a threat to both the environment and agriculture and has forced farmers to eliminate many crops, the most important of which are vegetables, an essential source of income for them.”

“Because of this, farmers will also have to rely on tankers to buy and transport water from remote areas … increasing the prices of basic vegetables,” Hashem added, pointing out that livestock also depend on the reservoir for drinking water.

Syria is suffering a water crisis as a result of climate change and mismanagement of water resources as well as the suspension of several water pumping stations for lack of electricity, fuel and a loss of laborers to displacement.

The displacement of a large number of Syrians to opposition-held areas in northwestern Syria has increased demand for water resources in Idlib.

Salem Awad, a farmer who lives in a nearby village, told Al-Monitor the drought has cost him $1,000 so far. “I bought vegetable seeds and fertilizers and paid wages to workers without being able to irrigate the crops, so they all died before they ripened.”

A farmer in the village of Amoud told Al-Monitor on condition of anonymity, “The Ministry of Irrigation in the HTS Salvation Government is unable to find alternative solutions for farmers and will not provide any assistance or compensation.”

Abu Dhargham, who herds sheep in the village of al-Zanbaqi, told Al-Monitor that he has been forced to take his flock to another area in the Idlib countryside where water is available.

Yahya al-Sayyid Omar, an economics researcher residing in Istanbul, told Al-Monitor, “Agriculture in the countryside of Idlib provides income for a large proportion of the population, so the drought deeply affects social, economic and political stability. Recall that the drought that hit Syria between 2007 and 2009 … was one of the reasons behind the 2011 revolution."

He went on, "The drought affecting Idlib will impede economic empowerment and social stability efforts as it exacerbates poverty and unemployment and endangers food security."