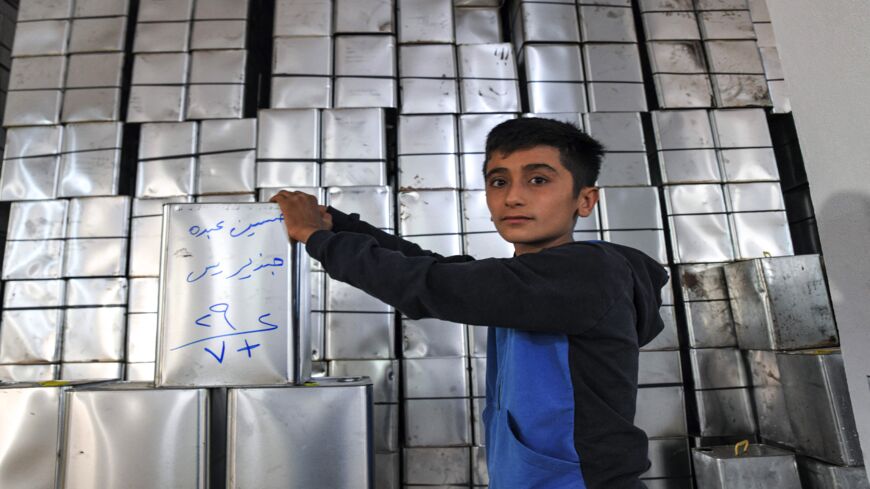 A boy looks on next to a stack of olive oil containers at an oil pressing facility belonging to Syrian Kurds near Jindayris in the countryside of Aleppo in the Afrin region of northwestern Syria on Oct. 12, 2021. - RAMI AL SAYED/AFP via Getty Images

IDLIB — The General Zakat Authority formed by the Salvation Government is imposing zakat (obligatory Islamic tax) on the products of olive growers. The authority released a circular to the growers at the beginning of the olive harvest and pressing season, telling them to pay the amounts they owe to the olive pressers in Idlib. The authority warned olive pressers not to allow crop owners to claim their oil production until zakat is paid. The zakat on oil and olive crops is estimated at 5% in the event that the land is irrigated and 10% if it is irrigated by rainfall. The authority emphasized in its circular the importance of not selling any quantity of oil or olives until after its owner paid zakat through authorized receipts.

Olive production season this year has been weak due to the scarcity of water needed to irrigate olive trees as well as the lack of rain last year. Syria faced a semi-dry year, negatively affecting crops. The rains came late, weakening olive production, as the latter also relies on rainfall when the harvest begins. In light of the high production costs in terms of fuel and transportation and the wages of mills, the suffering of olive growers worsened. Adding insult to injury, they say, is the tax imposed on olives by the Salvation Government.

Two years ago, when the Salvation Government imposed zakat on olives, the opposition Syrian Islamic Council issued a statement in which it stated that Hayat Tahrir al-Sham (HTS) did not have “recognized legitimacy,” even if by virtue of the “rule by force.” The council stated, “They are not a recognized state in the areas that they control or other areas. They command neither obedience nor authority, and those who obey them only do so to shield themselves from their evil and out of fear of their tyranny.”

Regarding forcing people to pay zakat on olives, the council said it contradicts the opinion of the majority of Muslim jurists who impose zakat on everything that is eaten, stored, preserved and dried from grains and fruits such as wheat, barley and corn, and olives are not among these products.

The council stressed that even if some scholars argue that zakat on olives is obligatory, neither the HTS nor its “arms” (the Salvation Government) have the authority to compel people. It added, “We learned that the people of the region formed committees to collect their fellows’ zakat voluntarily and return it to the poor of the town itself. This is the foundation of zakat originally.”

Farmer Khaled al-Hamid from Idlib told Al-Monitor, “The HTS-affiliated Salvation Government sends employees to olive presses to collect the percentage set by the government. Those imposing the payment of these taxes are fined by the nearest police station affiliated with the government and can be punished with imprisonment or payment of double taxation. When I want to distribute zakat for olive crops, I am supposed to give it to the poor from my relatives and neighbors whom I know, not to the Salvation Government.”

Farmer Bassam al-Ali from the Idlib countryside told Al-Monitor, “We work hard every year to grow our crops and have a season that we can benefit from. Despite our efforts, sometimes we lose. But the loss is certain when the Salvation Government takes a quantity of oil after pressing it. We are facing a lack of water to irrigate our crops, and the Salvation Government does not provide us with any assistance in securing water for our crops. The government does not provide any assistance, and it only collects taxes without anything in return. It calls those taxes zakat to legitimize the issue, knowing that many Muslim jurists originally refuse to have zakat on the oil crop. Still, the Salvation Government did not accept the opinions of most Muslim jurists who reject the zakat on olives.”

In this context, a former Sharia lawmaker in the HTS nicknamed Abu Yahya al-Shami told Al-Monitor, “In the difficult economic situations that the country is going through, there is nothing wrong with postponing zakat from a legal point of view. This applies to opposition areas, and stopping or postponing zakat is a delicate issue that can only be approved by a legal ruling by religious scholars rather than officials. Those who consider the Salvation Government’s imposition of zakat on olives unjust are right. The HTS is abusing its power by collecting this zakat.”

He added, “I am not aware that the Salvation Government pays aid to farmers, and everything they receive comes through specialized organizations and international aid. The HTS is a totalitarian organization that interferes in people's affairs and their lives in Idlib, and it aims to establish complete control, which requires a lot of money to cover costs and expenses that it (HTS) cannot secure through any means other than taxes. After all, the area does not have any natural and inward resources.”

Idlib-based activist Ahmed al-Qais told Al-Monitor, “What we know is that the HTS and even the existing institutions of the Salvation Government do not provide any form of support to sectors, including the agricultural sector. Basically, the government does not have anything to offer, even at the simplest levels, like agricultural guidance. Imagine then the situation for financial or material support. It cannot happen under this existing government. Of course, following ineffective mechanisms in all sectors increases popular discontent, and deducting this zakat specifically is another source of disgruntlement. Many believe it does not fulfill the conditions of zakat and is just another imposed tax.”

He added, "Most of the HTS resources stem from taxes imposed on goods, fuel, cars and crops. Taxes apply to everything and no support is offered to sectors in return, especially delicate sectors such as health and education."

An official in the Salvation Government told Al-Monitor on condition of anonymity, “The zakat that we take is not tax. It is a religious right. We return it to the poor and the needy, and we spend it on widows and their children. There is a general zakat authority that supervises the disbursement of zakat money to the deserving poor." 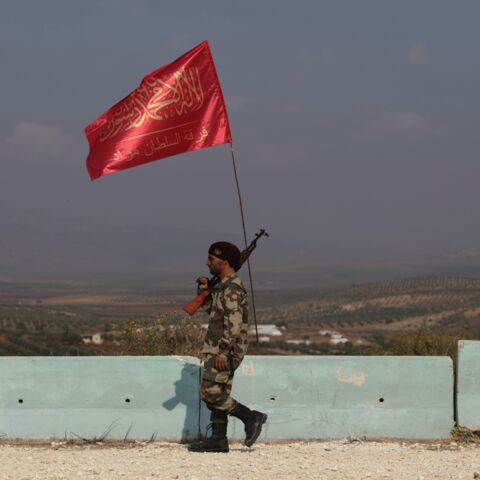