For the first time in more than 150 years, archaeologists found large Assyrian rock reliefs in Iraq, but protecting the discoveries unveils new challenges. 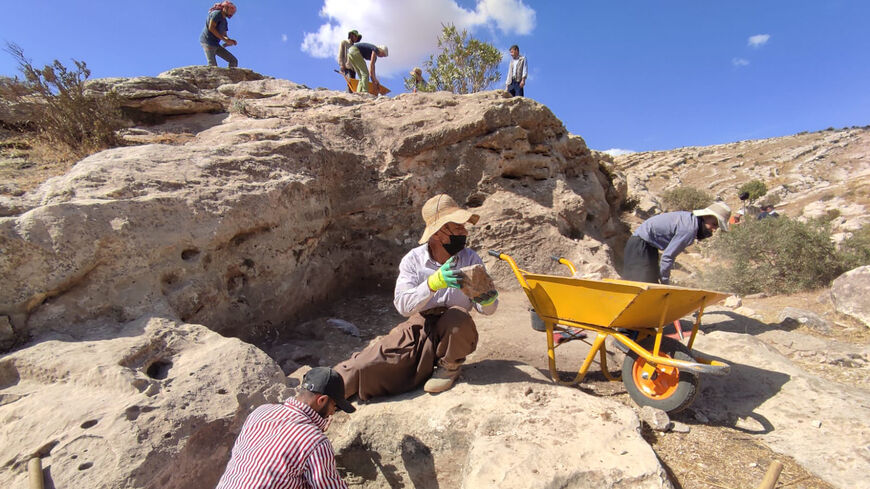 Excavators work at the site of the archaeological dig on the eastern bank of the Faidi canal, just north of Mosul. - The Kurdish-Italian Faida and Khinnis Archaeological Project

Two thousand years ago, it might have been the Napa Valley of Mesopotamia. Today, the ancient Assyrian wine factory sits among large stone carvings alongside an almost 4 mile irrigation canal near Khannis in northern Iraq.

The 14 stone basins cut into white rock were once used during the reign of the Assyrian King Sennacherib in the late 8th and early 7th century B.C. for large-scale winemaking, according to the team of archaeologists from the Department of Antiquities in Dahuk. The team unveiled the discovery last week alongside their colleagues at Italy’s University of Udine. It is believed to be the oldest industrial wine press discovered in northern Mesopotamia.

But it was 12 panels hewn in limestone found on the eastern bank of the Faidi canal, just north of Mosul, that were the prized discovery, according to Daniele Morandi Bonacossi, professor of Near Eastern Archaeology at the University of Udine and director of Land of Ninevah Archaeological Project in the Kurdistan Region of Iraq. The reliefs, measuring nearly 17 feet wide and 7 feet tall, depicted Assyrian kings praying to sacred animals and deities including Ishtar, the goddess of love and war. It was the first time in more than 150 years that archaeologists were able to find large Assyrian rock reliefs in Iraq.

Protecting the discoveries, however, unveils new challenges. The atmosphere erodes sculptures left unprotected from heat, rain and strong winds. Archaeologists in Dahuk are now preparing to install rain covers above the reliefs during the winter. They have also brought in geologists and hydrologists to study the state of the reliefs.

Bekas Brifkany, director of antiquities in Dahuk governorate, said his office has been studying precipitation in the region over the last 20 years. Those number, he said, will help better determine how to protect these sites from natural factors.

If these sites survive the elements, they will have to contest with looters. Monitoring of the archaeological sites dissolved after the US-led invasion of Iraq in 2003, and illicit trade of antiquities expanded. The underground dealings reached new levels within just the last seven years with the advance of the Islamic State that brought with it unseen destruction to finance its terrorist operations.

For years, Iraqi intelligence attempted to track down stolen items. In one instance, a tip led police to a rusting shed in eastern Bulgaria that contained a tablet dating back nearly 5,000 years.

As the security situation improved, repatriation of antiquities increased. In August, 17,000 archaeological artifacts returned to the country. They now sit alongside historical pieces like the Gilgamesh Dream Tablet in the Iraqi National Museum, which reopened this summer.

But the expansion of nearby cities continues to encroach on this history. In Faida, four brick cement factories were built as close as 20 meters (65 feet) to the ancient Assyrian canal. In Khannis, some stone reliefs lay among trash and graffiti. And one rock relief was partially destroyed when a cattle farmer sought to build a bigger stable, so he bulldozed into a cliff and destroyed the upper part of the stone carving.

Organizations like the ALIPH Foundation in Geneva and Gerda Henkel Foundation in Dusseldorf are working to protect these sites against marauders. A nearly 2 mile fence was built around the Faidi discovery that includes a site keeper and markers to indicate the region’s history.

But time is not on their side. Morandi Bonacossi said the sites are “highly endangered.”

Returning the pieces back to Iraq has become a point of controversy for some in the modern Assyrian community who say the security situation remains unstable and will lead to a repeated cycle of trafficking.

Jenan Younis is an Assyrian who grew up in London. The artifacts in the British Museum are as close as she has ever been to her homeland. Although she believes the items belong where they originated, she said authorities have failed to prove they can protect these finds. Younis has mixed feelings about the Faidi and Khannis discoveries. “Their fate sadly is all too predictable,” she said. “They are far safer left underground.”