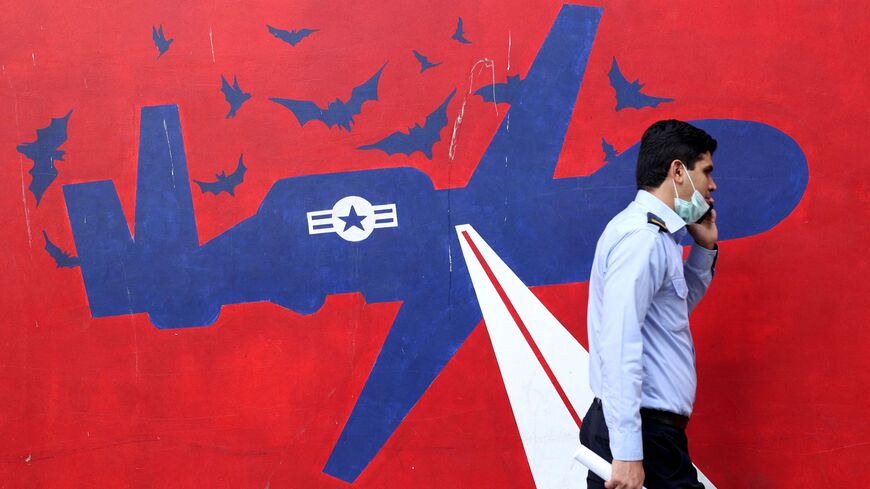 A man in a medical mask speaks on the phone while walking past a mural depicting a US Air Force unmanned aerial vehicle painted on the outer walls of the former US Embassy in Iran's capital Tehran on Oct. 9, 2021. - ATTA KENARE/AFP via Getty Images

The Biden administration sanctioned several Iranian companies and individuals on Friday in connection with the Islamic Revolutionary Guard Corps’ drone program, including an Iranian commander believed responsible for the deadly attack this summer on the Mercer Street commercial vessel.

A statement from the Treasury Department described the use of lethal unmanned aerial vehicles by the IRGC’s elite Quds Force in attacks on international shipping and on US forces. Iranian-supplied drones are also used by Tehran-backed groups in countries including Lebanon, Iraq and Yemen as well as in Ethiopia’s Tigray region, the statement said.

“Iran’s proliferation of UAVs across the region threatens international peace and stability. Iran and its proxy militants have used UAVs to attack US forces, our partners, and international shipping,” Deputy Secretary of the Treasury Wally Adeyemo said in a statement.

“Treasury will continue to hold Iran accountable for its irresponsible and violent acts,” he said.

The new sanctions follow a suspected Iranian drone attack on Oct. 20 that targeted US forces stationed at the al-Tanf garrison in southern Syria. No casualties were reported among US troops, who Fox News reports were tipped off prior to the attack.

The United States hasn’t assigned blame, but Pentagon spokesperson John Kirby pointed to Iran’s history of supporting similar attacks by Shiite militia groups in the region. Officials told the Associated Press that Washington believes Tehran facilitated the attack, but that the drones were not launched from Iran.

Among the four individuals designated Thursday were Brig. Gen. Saeed Aghajani, who the United States said directs the planning, equipment and training of the IRGC’s UAV operations.

The department accused Aghajani of orchestrating the drone attack on the Israeli-linked Mercer Street vessel off the coast of Oman in July that killed a British sailor and the ship's Romanian captain. The Treasury also blamed Aghajani for a  2019 attack on a Saudi Arabian oil facility.

Also targeted on Friday was the Kimia Part Sivan Company, an Iran-based firm that the administration said worked with the Quds Force to improve its UAV program. In addition, the Treasury sanctioned IRGC Brig. Gen. Abdollah Mehrabi, Oje Parvaz Mado Nafar Company and its managing director for allegedly procuring UAV engines for the IRGC.

The sanctions come days after Iran said this week that its negotiators would return to Vienna by the end of November to resume talks aimed at reviving the landmark nuclear agreement, which provides sanctions relief in return for curbs on Iran’s nuclear activities. US special envoy for Iran Robert Malley told reporters on Monday that Gulf and European partners were growing impatient with Iran’s delay tactics.