Iran and Pakistan are talking about the strengthening of their military relations, in the face of the Taliban takeover in neighboring Afghanistan and the region's geopolitical changes. 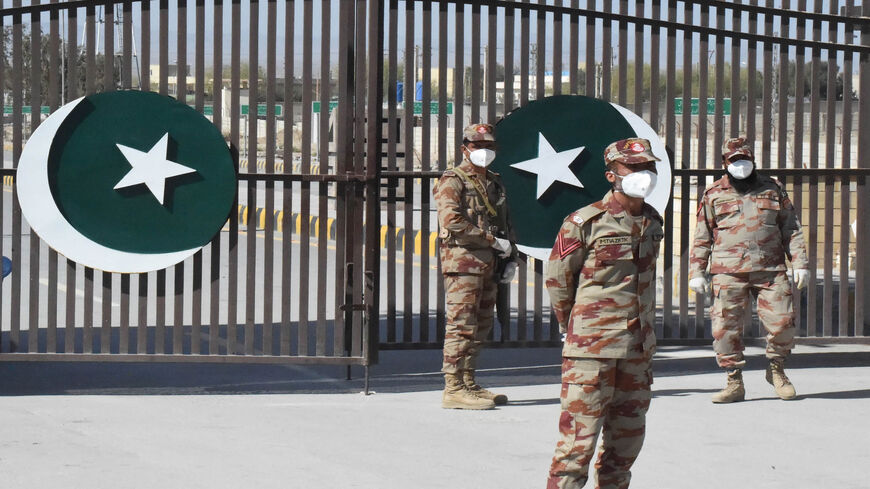 Pakistani soldiers wear facemasks on the closed border of Pakistan-Iran in Taftan, as fears over the spread of the coronavirus escalate following an outbreak in neighboring Iran, Pakistan, Feb. 25, 2020. - Banaras Khan/AFP via Getty Images

Iran’s army chief, Maj. Gen. Mohammad Hossein Bagheri, headed a high-level military delegation to Islamabad last week at the invitation of his Pakistani counterpart Gen. Qamar Javed Bajwa. Marking a new phase in military ties between both neighbors, the trip held special significance as it took place at a time when the region is going through major geopolitical changes.

In remarks welcoming his Iranian guest, Bajwa stated, “Pakistan and Iran are two brotherly countries and our close cooperation is vital for regional peace and stability.”

In response, Bagheri suggested enhanced cooperation in the domains of counterterrorism and military training. In agreement that Pakistan and Iran’s mutual borders should become “borders of peace and friendship,” the two generals had a successful one-to-one meeting.

In an interview with IRNA, Bagheri said that Iran and Pakistan had deep and historical ties and cooperation on common borders had been enhanced in recent years. Observing that Iran and Pakistan had common concerns in Afghanistan, Bagheri said, “We must consult with each other and take decisions that lead to the progress of the Afghan people and help in forming an inclusive government in the country.”

At the delegation-level meeting, matters like the situation in Afghanistan and the fencing of the Pakistan-Iran border, as well as its management and security, were on the agenda. Notably, the development of communications for enhanced security along the common borders of Iran and Pakistan also came under discussion.

On the last day of his three-day trip, Bagheri visited shipyards and naval installations in Karachi and then met with the commander of the Pakistan navy before he left Islamabad. It was agreed that both countries would work together on building ships and submarines and joint maritime security would be upgraded. Notably, Pakistan would also be cooperating with the Iranian Maritime Security Center in Chabahar once it is opened.

Discussing this defense collaboration with Al-Monitor, Caroline Rose, senior analyst at the Newlines Institute in Washington, said, “The visit of the Iranian military delegation in Pakistan signifies Iran's interest in strengthening defense ties and avenues for cooperation in Central and South Asia.

“As uncertainty over Afghanistan's security landscape intensifies and as Tehran continues to gauge the Taliban, the Iranian government seeks out alternative partners in the region it can use to build leverage with the Taliban inside of Afghanistan and expand its regional influence,” she said.

Basically, a joint strategy was needed to deal with any emerging security threat from Afghanistan. Moreover, some recent divergences and issues between Tehran and Islamabad also needed to be sorted out.

To start with, Pakistani and Iranian political interests in Afghanistan did not really match. Ever since the Taliban takeover of Afghanistan in August, both countries had found themselves backing opposite sides and the gap grew further when the interim government announced by the Taliban was more tilted to favor Pakistan.

To avoid mistrust between both neighbors, these talks were badly needed. With renewed understanding, Tehran and Islamabad would be better able to manage any spillover of violence from Afghanistan as conditions continue to remain fluid there.

Commenting on this upgrade in military relations, a European diplomat posted in Islamabad who was previously posted in Tehran, told Al-Monitor on condition of anonymity, “Maj. Gen. Bagheri’s visit to Islamabad — a few days after the visit of Deputy Foreign Minister Ali Bagheri Kani on Oct. 5 and that of the members of the Iran-Pakistan Parliamentary Friendship Group on Oct. 14 — confirms the growing ties in the defense sector, the steady relationship between the two countries and their willingness to strengthen their security cooperation in the face of the unfolding Afghanistan crisis.”

Regarding Iran’s stance toward the Afghan interim administration, the European diplomat said, “Iranians are closely monitoring the developments in Afghanistan both in terms of political and security dynamics. As far as the first is concerned, the Taliban have given a nod to Tehran with the recent appointment of personalities closer to Iran [including a Hazara, Mohammad Hassan Gheyasi, as deputy minister for public health]."

The diplomat continued, “Despite the Iranian reservations for the Haqqani presence and role within the Taliban set-up, the Iranian establishment is open to discussing with regional countries — starting from Pakistan with which it has a solid relationship — a political solution for Afghanistan. In this regard it is worth mentioning that Iran will reportedly host a regional meeting on Afghanistan in the coming days.”

Next, upgrading the security on the 1,000-kilometer (621-mile) joint border between Iran and Pakistan had become necessary once again because of renewed terrorist infiltration.

To add perspective, relations between Tehran and Islamabad had greatly improved due to frequent visits and negotiations in the last two years. Before that, in 2017, there had been some tensions due to cross-border attacks on both sides and Bagheri had expressed serious concern.

Following this, Iran’s then-Foreign Minister Mohammad Javad Zarif had visited Pakistan to discuss the issue and, in November that year, Bajwa visited Iran to upgrade security cooperation and defense ties. Therefore, military relations have considerably improved ever since Bagheri’s visit to Pakistan in 2018. But with the upheaval in Afghanistan this year, new terror risks have emerged.

Explaining Tehran’s fears, the European diplomat said, “Having come to terms somehow with the Taliban, the main concern for Tehran in this moment is the potential threat coming from Islamic State-Khurasan Province [IS-K] at the western border of Afghanistan, where in the last months its presence has been detected, in addition to Jaish al-Adl [Army of Justice], an extremist Salafist group that has since its foundation claimed responsibility for a series of operations against Iran’s domestic security forces and Islamic Revolutionary Guard Corps operating in Sistan and Baluchistan province.

“A possible convergence of interests between IS-K and some Baluchi groups is seen as a potential threat by Tehran and the collaboration/coordination with Pakistani armed forces is deemed essential,” the diplomat added.

According to media reports, Islamabad and Beijing may have finally succeeded in pushing the Taliban to launch a crackdown on Pakistani Baluch separatist groups operating from their sanctuaries in Afghanistan in exchange for economic cooperation and humanitarian assistance. Therefore, at least the Baluch threat might be contained in the days ahead.

Identifying the security threat from Afghanistan, the European diplomat noted, “It is likely that Bagheri has conveyed to the Pakistani side the expectations of Tehran for an increasing collaboration on the matter, especially at a time where the risk of a security vacuum in the area after the collapse of the Afghan institutions is recognized by all the relevant actors in the region. The ongoing clashes between the Taliban and IS-K in Nangarhar are closely monitored by the Iranians. In this regard the exchange of information between the two countries is considered very relevant for Tehran. It is also likely that the follow-up of the discussions on the exchange of border security-related information held during the Zarif's visit to Islamabad on Nov. 10-11, 2020, was discussed.”

Finally, in recent weeks, Tehran and Islamabad found themselves on opposite sides in one more matter. Apparently, Iranian trade with Armenia was disrupted and tensions built up between Tehran and Baku to such an extent that both carried out “competing military drills” at their borders.

In the meantime, Turkey and Pakistan started military exercises together with Azerbaijan, complicating the situation further for Tehran so this divergence had to be sorted out. Lately though, Tehran and Baku have decided to settle differences with dialogue. Apparently, most differences have been settled for now.

While IRNA reported that Bagheri’s visit “would open a new chapter in military, defense and security ties,” the Pakistan army public relations wing also announced the two sides agreed on “defense cooperation and working together for regional peace and unified response to terrorism which is a common enemy.”