The Islamic Republic questioned the credibility of the rapporteur’s latest account, saying it was founded on claims by "terrorist groups." 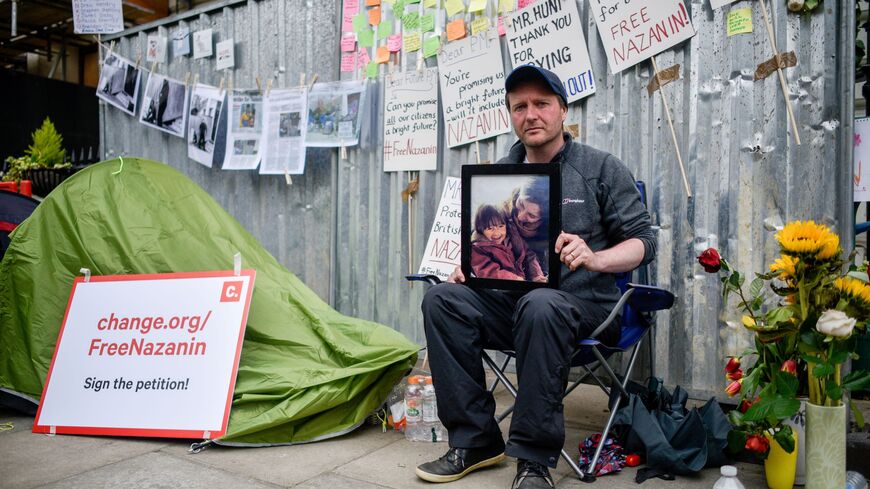 Richard Ratcliffe holds a protest outside the Iranian embassy in London on June 20, 2019. Ratcliffe's British-Iranian wife, Nazanin Zaghari-Ratcliffe, was jailed in Iran in 2016 on spying charges, which she and the British government deny. -

In a statement, the deputy of Iran’s permanent mission to the United Nations, Zahra Ershadi "expressed regret" at how Rehman had relied on "ambiguous and unofficial sources" with information provided by “terrorist groups.”

Ershadi did not specify those groups, but on previous occasions, the Islamic Republic has linked some international reports on its rights record to the MEK, or Mujahedin-e-Khalq Organization, an exiled opposition group that has been fighting for the overthrow of the Iranian government in the past four decades.

On Monday, Rehman read his report to the UN General Assembly’s committee on human rights, in which he particularly sounded alarm on the rising number of executions in Iran. According to the special investigator, the Islamic Republic sent over 250 people to the gallows in 2020 alone, among them at least four minors. So far this year, Rehman’s report said, the figure stands at 230.

Defending the Islamic Republic’s judicial system, the Iranian diplomat refused to admit rights violations in her country and instead criticized the rapporteur for exercising silence on the "inhumane" rights situation in the United States. She also described the appointment of a special rapporteur for Iran as a politically motivated move.

While the mission noted that it will continue "constructive" cooperation with the UN rights body, the Islamic Republic has repeatedly declined entry requests by the UN rapporteur, who has been seeking a first-hand account.

Rehman’s latest report came in light of growing concerns, also, over deaths in custody in Iranian prisons. In the face of several such cases reported in recent months, Iranian officials have delayed explanations pending internal probes. In a detailed report in mid-September, Amnesty International counted at least 72 such deaths over the past ten years in Iranian jails, highlighting a culture of "immunity" and lack of accountability in the Iranian judicial system.

Rehman and international rights groups have also drawn the ire of Iranian officials with their persistent calls for the prosecution of Iran’s hard-line President Ebrahim Raisi over his role in the execution of thousands of political prisoners in the late 1980s.

Despite the mounting pressure, nonetheless, Iranian authorities appear to be digging in their heels when it comes to death penalties. Only last week, two brothers were executed in the southwestern province of Khuzestan in one day. The mother of the two defendants, according to local activists, also succumbed to a heart attack upon hearing the death news.

Most recently, Iranian Kurdish rights groups reported today on the "imminent" execution of two Kurdish political prisoners in the northwestern city of Urmia. The pair’s sentence has already been upheld by the Iranian High Court, who found one linked to a Kurdish opposition group and the other to a Sunni extremist cause.

The two were reportedly transferred out of their wards to "an unknown location," a common, ominous sign in Iranian prisons that an inmate is being prepared to see the noose around their neck.