Albania accused Iran of conducting a cyberattack against its government. The eastern European country hosts an Iranian dissident group, which has harmed bilateral relations. 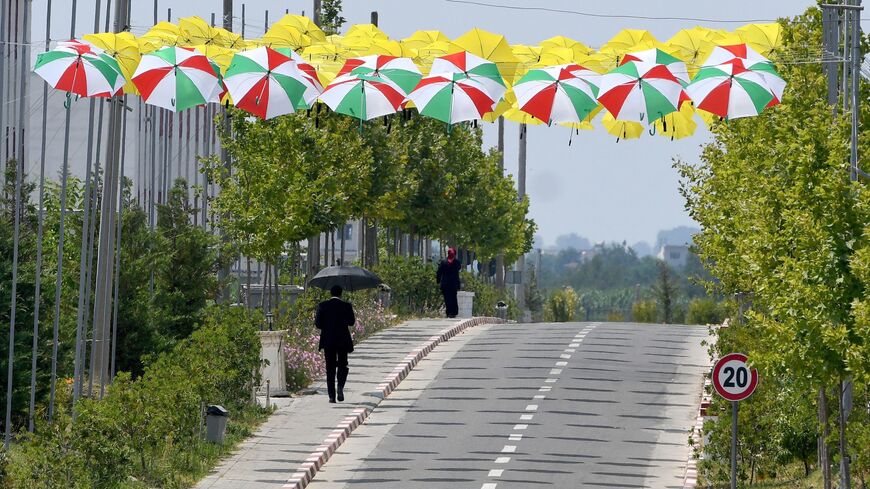 A member of Mujahedin-e Khalq walks in a street at the Ashraf-3 camp, a base for the Iranian dissident group, in Manza, July 10, 2021. - GENT SHKULLAKU/AFP via Getty Images

Albania has cut diplomatic ties with Iran and kicked out Iranian diplomats, following a July cyberattack blamed on Tehran.

What happened: Earlier today, Albanian Prime Minister Edi Rama announced that the eastern European country was severing ties with the Islamic Republic, effective immediately. He gave Iranian diplomats 24 hours to leave Albania. Rama said the order is in response to a July cyberattack that targeted Albanian state infrastructure and communications.

Why it matters: Iran and Albania have a somewhat troubled relationship. Since 2016, the Iranian dissident group Mujahedin-e-Khalq (MEK), has been based in Albania. The MEK opposes the Iranian regime and controversially fought alongside Saddam Hussein during the Iran-Iraq war. Tehran designates the MEK as a terrorist organization and many Western observers describe the group as a cult.

The United States had asked Albania to host the MEK. The group previously was based in Iraq, and also has a presence in France.

One Iran analyst said that Albania's decision to host Mujahedin-e-Khalq hurt relations with the Islamic Republic.

"Iran-Albania diplomatic relations were doomed when Albanian officials accepted the US request to allow the relocation of MEK members to Albania," Ali Ahmadi told Al-Monitor. "The cult is more of a security nuisance than an actual threat but the Iranian security officials have long been concerned about their presence."

Ahmadi said that Albania's has not only welcomed the MEK, but enabled them to pursue activities against Iran.

"It would be one thing if Albania said that they were simply providing shelter to these people but, by all indications, Albania has allowed them to set up an anti-Iran base of operations for propaganda, training, and possibly planning more terrorist attacks," he said.

Mujahedin-e-Khalq does publish propaganda and conduct training from its base in Albania. The group has committed attacks in the past.

The Iranian press sometimes reports critically on MEK’s presence in Albania. Last December, the semi-official Tasnim News Agency reported that members were arrested for allegedly trafficking drugs and people there.

Iran has allegedly been both the recipient and deliverer of cyberattacks. In October of last year, Iranian gas stations were hit by an apparent cyberattack. A few months prior, Iran’s Natanz nuclear facility sustained an explosion resulting from a cyberattack. Iranian authorities attributed the Natanz incident to Israel and have blamed other similar events on the United States.

On the other end, in January, the US military implicated Iran in several cyberattacks across the Middle East. Some Israelis also suspect Iran of being responsible for cyberattacks on Israeli hospitals late last year.

"The United States will take further action to hold Iran accountable for actions that threaten the security of a U.S. ally and set a troubling precedent for cyberspace," read a statement.

Editor's note: this article was updated to include reactions from the White House and the Iranian Foreign Ministry.