Volunteers raise breast cancer awareness among women in opposition areas in northwestern Syria, where access to health care is limited. 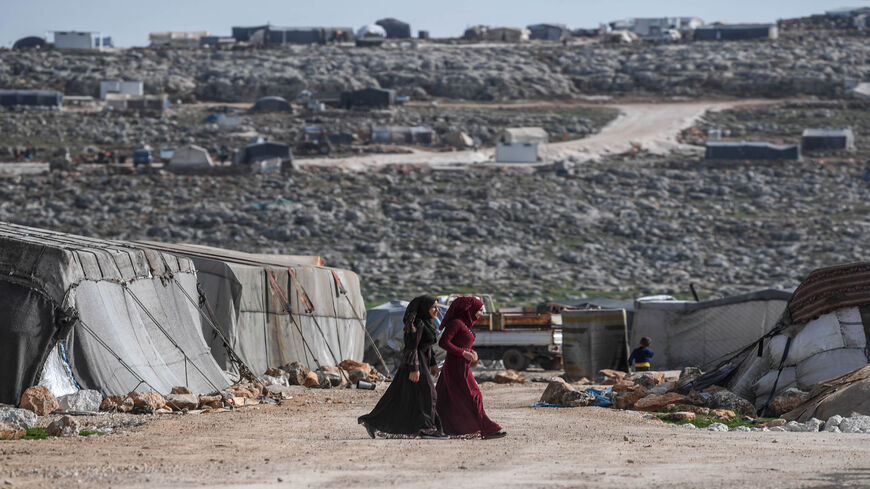 Displaced Syrian women walk at a camp in Kafr Lusin village on the border with Turkey in the northwestern province of Idlib, Syria, March 10, 2020. - Ozan Kose/AFP via Getty Images

The campaign, dubbed “Don’t Delay It,” focuses on the importance of early detection and self-examination and the impact on recovery rates, according to an Oct. 7 post on the White Helmets’ Facebook page.

Fatima Obeid, coordinator in charge of the women's centers affiliated with the White Helmets, told Al-Monitor, “The long-standing war waged by the Bashar al-Assad regime has had very negative effects on the Syrian people. Women have been the biggest victims of this war. Not only have they faced bombings, displacement and loss of their breadwinner, they also lost access to health-care facilities.”

She noted, “Amid the dire living circumstances in northwestern Syria, women's physical health is no longer a top priority. Women’s health care has become unavailable, especially in camps where large numbers of Syrians lack the minimum life necessities. Securing food and getting enough water and heating materials [for the winter season] are more pressing needs now.”

Obeid said, “Women in northwestern Syria lack awareness and knowledge of breast cancer and the need for early detection, even though it is one of the most common types of cancer among women. This prompted the women's centers of the White Helmets — of which there are 33 in the opposition areas in northwestern Syria — to launch this campaign at the start of October, known as Breast Cancer Awareness Month or Pink Month.”

She added, “One female volunteer from each center received training provided by the Syrian Medical Association for Syrian Expatriates. The training was given over two consecutive days in three sessions at the end September. In turn, these trained volunteers taught their fellow female volunteers how to raise awareness with women who visit the women’s centers for medical care.”

She pointed out that 260 female volunteers participated in the campaign, distributed over the 33 centers across northwestern Syria, including the countryside of Aleppo, the western countryside of Hama, Idlib and its countryside, and the Latakia countryside.

Elaborating on the goals of the "Don’t Delay It" campaign, Obeid explained it aims primarily at raising awareness of breast cancer and its spread among all age groups. “The campaign focuses on the importance of early detection in recovery, while emphasizing the importance of self-examination,” she said.

She noted, “It is easy for the White Helmets female volunteers to reach Syrian women because of their direct contact with them. These volunteers provide medical care, whether in the [displacement] camps or in the 33 women's centers. The local community trusts the White Helmets volunteers and this enables them to deliver awareness messages and advice to women, and to have a positive impact on women.”

Obeid pointed out that “some Syrian women requested that the White Helmets volunteers organize additional special awareness sessions in the camps to educate women. [Such feedback] motivates us to intensify efforts to raise awareness on breast cancer in society in general, and among women in particular, for their great role in transmitting awareness and guidance to all their family members.”

According to Obeid, this campaign is the first of its kind in opposition areas. “We will be organizing this campaign annually. We will also upgrade the training provided to volunteers on ways of dealing with women and communicating information. The coronavirus outbreak in northwestern Syria prevented us from organizing large physical sessions.”

Women with breast cancer in opposition areas in northwestern Syria have difficulty receiving treatment. The Oncology Center at Idlib Central Hospital affiliated with the Syrian-American Medical Association is the only breast cancer treatment center serving these areas.

This center's work is, however, limited to early detection of the disease and treatment of some cases. It has a shortage of some highly priced medicines and does not offer free diagnosis or radiotherapy.

According to the World Health Organization (WHO), breast cancer is one of the most common types of cancer among women globally. WHO dedicates the month of October to raise awareness about it. One woman out of every 12 women will develop breast cancer in her lifetime, and about 685,000 women died from it in 2020, WHO reported.

Heba Mawas is one of the White Helmets volunteers who helped raise awareness of breast cancer for Syrian women in the village of ​​Nahliya in the southern countryside of Idlib. She told Al-Monitor, “The women’s center [in Nahliya] organized awareness sessions about breast cancer. During the sessions, we noticed that women lack awareness and knowledge about this disease. They also lack health-care services.”

She said, “Through these sessions we shed light on breast cancer causes and symptoms. We showed women how to do a self-examination and stressed the importance of early detection to reduce the incidence of this disease. There was a great turnout. The information these women received through these sessions increased their knowledge and encouraged them to learn more about breast cancer.”

Khadija Mohammad, another White Helmets volunteer who works in the women’s center of Qurqania town in the northern countryside of Idlib, told Al-Monitor, “The war reduced awareness about breast cancer, especially among women. Every woman should be well informed about this type of cancer. Breast cancer can be detected by self-examination or by professional examiners. We started organizing sessions to raise awareness and encourage self-examination and testing.”

Leila Suleiman, a displaced mother of three from the northern countryside of Hama who now lives in the city of Idlib, attended one of the training sessions organized by the White Helmets campaign.

She told Al-Monitor, “I am very grateful for the female team from the White Helmets for their campaign to raise awareness about breast cancer. I now realize the importance of early detection and self-examination, and was introduced to the symptoms of breast cancer.”

“I know now that there is a 97% chance of recovery in case of early detection. [The team] also taught us about early detection. And every woman must be aware of this information,” she added.