Egypt held the first Mawlid festival with Sufi chanting performances to highlight the main core of Sufism, which is combining all religions and urges people to accept each other, whatever their religion is. 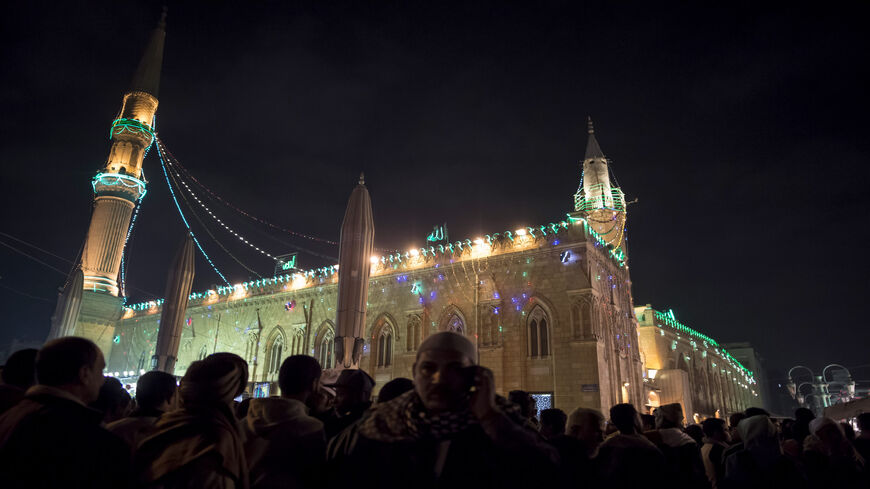 The Egyptian capital witnessed Oct. 16 the first festival observing Mawlid al-Nabi, the birthday of the Prophet Muhammad, on the GrEEK Campus in Tahrir Square.

The Tagali (Transfiguration) festival was a one-day event featuring a synthesis of the most prominent Sufi music stars in Egypt and included seven performances.

Muslims all over the world celebrate Mawlid al-Nabi on the 12th day of the third month in the Islamic calendar (Rabie al-Awal), which falls on Oct. 19 this year. Every country has its own way of celebrating the occasion.

In addition to the Prophet Muhammad, Muslims observe the birthdays of the extended family members of the Prophet (Ahl al-Beit) and the Prophet's grandson (Al-Hussein). Sufis celebrate the mawlids in a festive way.

“It is the first festival organized in Egypt observing the Mawlid al-Nabi,” Nour Sayed, event planner at Mkan, the organizer of the event, told Al-Monitor. “I want to change people's minds about their misconception of Sufism. The main core of Sufism combines all religions and urges people to accept each other, whatever their religion is."

She believed that a Sufi festival would be most effective in communicating this message to the public, and selected a time coinciding with Mawlid al-Nabi celebrations for the events that included performances by Sufi chanters.

“I also want to let people know that celebrating Mawlid al-Nabi is not linked to a specific place — we can celebrate it anywhere," she noted.

She added that some people say that mawlids are crowded with people from all over the country who gather for street processions at religious sites, and they are afraid to be robbed or worried they wouldn't get to enjoy themselves. For this reason, she planned the festival in an accessible place far from the traditional sites where mawlids are usually celebrated in order to encourage people to come and see the beautiful mawlid traditions.

Celebrations related to Mawlid al-Nabi are linked with Sufi strands of Islam as they are marked with poems and songs that praise the Prophet.

Celebrating Mawlid al-Nabi dates back to the Fatimid era. It still features some old traditions such as preparing special sweets like Arouset el-Moulid (sugar doll) and the sultan on a horse, both made of sugar and nuts decorated with colored paper.

The Tagali festival took place in downtown Cairo. Colorful lights lit up the area, young people sat on swings in the shape of horses and boats, and girls stood in line in front of a tent to have henna applied. In another tent a fortune teller welcomed a steady stream of women and men. Two young men made meat sandwiches in their food cart, a common scene during mawlids, and a crowd of people watched the various performances that included the Sufi tanoura dance, a magician and a fire show. Life-size Arouset el-Moulid dolls with their colorful dresses could be seen in multiple locations on-site.

“The band mixes between recitations, invocations and Coptic hymns,” composer and songwriter Mohamed Bakr, founder of Mashrou Rooh, told Al-Monitor. He said that the band's singers and musicians are both Muslim and Christian. This was the first time the band performed at a mawlid event playing Sufi music.

“We are not Sufis. We participated in the festival to convey the message of inner peace by playing Sufi music with Coptic hymns. I believe art has a vital role in sending positive vibes and helping people achieve spiritual inner peace,” Bakr said.

The band used Western instruments such as the piano, guitar and violin, and accompanying the band were two Sufi whirling dervishes, one female and one male.

Dalia Abu Bakr, a Syrian woman, told Al-Monitor, “It is the first time that I attend such a religious festival in Egypt. I heard about the mawlids here, but I never attended one as I didn't know where they were held. I learned about this event on Facebook and I am excited to be here.”

Abu Bakr supports the idea of holding Mawlid al-Nabi in accessible places rather than the processions held at religious sites. She noted that she felt safe and could take photos with the band members and the other performers.

“Today I am in seventh heaven. I got tons of positive vibes in a few hours,” she concluded.