University students in Turkey continue their protests for access to dorms and affordable rentals, despite police pressure and Erdogan’s denial of a dorm problem. 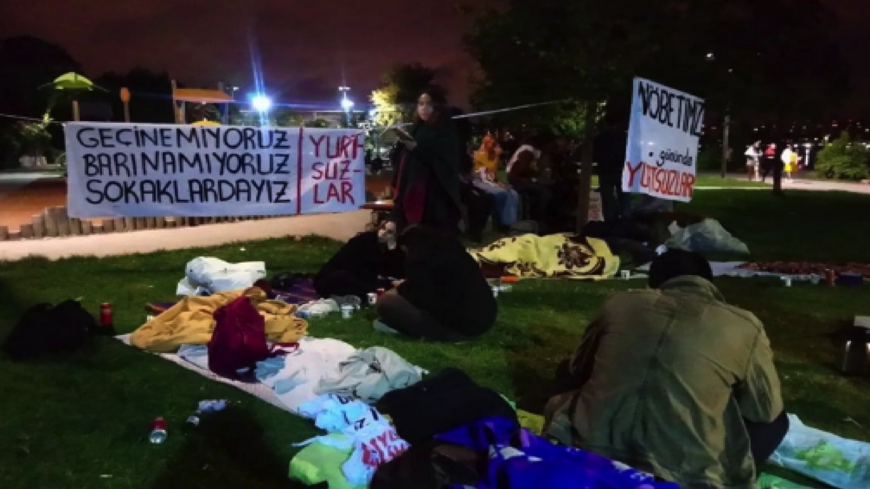 Students have a sit-in for affordable housing in Izmir, Turkey, on Sept. 28, 2021. - Yurtsuzlar / Twitter

IZMIR — On the eighth day of their protests alongside other students for available dorms and rentals, Beril Sengul and several of her friends were hauled away from their sit-in at a park in Izmir and taken to a police station.

“We were released in the morning,” Sengul, a student from Ege University, told GainTV on Sept. 29, the day after the detention. “We will not back down, because our requests are sensible. We need more state dorms because the present number does not meet our needs. … We were simply sitting in the park in a peaceful gathering; we do not know what reason the police had to detain us.”

Sengul and her friends are part of the Movement of Those Without Shelter, formed by students who have been camping in parks across Turkey since mid-September to protest the lack of public dorms or affordable rent. The protests have drawn students from the western city of Canakkale all the way to the southeastern metropolis of Diyarbakir.

The student unrest comes amid rising public discontent over the government’s perceived mismanagement of the economy and is likely to pull down the ruling Justice and Development Party’s sagging poll ratings even further. As many as 7 million youths will become eligible to vote in 2023 when presidential and parliamentary elections are due to be held in tandem. MetroPOLL, an Ankara-based polling outfit, said nearly half of the youth it surveyed disapproved of Turkish President Recep Tayyip Erdogan.

The country’s annual inflation jumped to 19.25% in August, the highest level in more than two years and higher than the central bank’s 2021 expectations. Food and non-alcoholic beverages showed the greatest year-on-year price rise at nearly 30%. Turks, particularly those in the big cities, have been complaining that skyrocketing rent is no longer sustainable. Erdogan has blamed the rise in food prices on five major market chains that wanted to maximize profits and the high rent on “greedy landlords,” and he has vowed to increase controls over both.

Erdogan’s reaction to the students' complaints was to brush them off as a “vicious campaign” by those who create “another version of Gezi protests,” an allusion to the mass protests that swept the country in 2013. Starting with a series of sit-ins at Istanbul’s Taksim Gezi Park to contest urban development, the protests turned into monthslong camping at the heart of Istanbul despite brutal suppression efforts by the police.

This comparison was immediately mocked by center-right opposition IYI Party Chair Meral Aksener. “Welcome to President Erdogan’s ‘Terrorist of the Week’ Show,” she tweeted. “You are unable to take care of the students, incapable of providing dorms, and cannot carry out the bare essentials of a welfare state, and then you dare blame students.”

“Protests by the youth have historically irked the state in Turkey,” professor Aysen Uysal, author of “Politics in the Street,” told Al-Monitor. “This government, however, has become more paranoid after young people played a key role in Gezi Park, a historical landmark that followed the Arab Spring. The students’ protests and camping in the parks show that social inequality has become a burning issue.”

In the early hours of Sept. 28, police detained 80 demonstrators who camped at several parks in Izmir and Istanbul following earlier, smaller operations in various other cities including Ankara and Eskisehir the previous week. In a short video, the Izmir demonstrators said they were handcuffed and maltreated by the police. They were kept for five hours and released in the morning.

The next day, the demonstrators carried their protests elsewhere. In Istanbul, Those Without Shelter protesters showed up at intra-city ferries with their blankets and said they’d sleep on board. In Izmir, a group who called themselves Yurtsuzlar, or Those Without Dorms, held a demonstration in front of a shuttered dorm on Sept. 29. They took aim at Erdogan’s opulent lifestyle, chanting, “We have no decent shelter while ‘others’ live extravagantly in palaces.”

Erdogan and his newly appointed Education Minister Muharrem Kasapoglu firmly deny that dorms are insufficient. “Our government has increased the capacity of dorms at an unprecedented level, with a million [beds],” Erdogan said at the opening ceremony of an elderly care unit in Istanbul on Sept. 26. There are 8.4 million university students in Turkey, Erdogan boasted in February 2021. "Those who are protesting are not students. You are lying. Your lives are full of lies,” the president charged.

A report released on Sept. 27 by the youth wing of a social democrat think tank, SODEV GENC, maintains that while the number of university students rose to 7 million in Turkey, the capacity of public dorms has declined. In the last year alone, 20 state dorms run by the Education Ministry’s Higher Education Credit and Boarding Institution were closed, making it particularly difficult for university students to find dorms when face-to-face education resumed in October.

According to the report, in 2018-2019, there were more than 1 million university students in Turkey’s largest city, Istanbul. The number of public dorms around the whole country was 674,672 — that is only two-thirds of the 1 million Erdogan claimed there were. In the last year, the number of beds in public dorms dropped by 426 in Istanbul, 196 in Ankara, 1,156 in Izmir and by 17,341 beds overall.

“The data we have used comes from the government itself, including the 2019-2020 report of the Ministry of Education,” Selim Cankara, SODEV GENC spokesperson and a student of international relations, told Al-Monitor. “So who is lying? The students, the state data or the president?”

Cankara said the AKP government allowed the state-run dorms to fall apart, mainly because it wanted to direct university students to dorms run by religious communities and sects. “In the last decade, we have seen a strong rise in the number of dormitories or student houses run by religious foundations. Our report has made a conservative estimate that 17% of all dorms belong to these religious sects, but even this may be understated,” he said.

The student groups’ requests include turning over the dorms owned by religious groups to the Ministry of Education to be used as public dormitories, increasing the number and the quality of state dorms in general, and imposing a ceiling on rents near schools. Subsidized public dorms cost about 300 to 400 Turkish lira ($35 to $45) monthly, but going to a private dorm or renting a flat may cost five to 10 times as much. The minimal monthly salary in Turkey is $267.

In many cities, including Ankara, Istanbul and Izmir, the municipalities have stepped in to aid the unsheltered. Tunc Soyer, mayor of Izmir, said the municipality had rented two buildings to provide housing for university students at subsidized rates and created a fund for students in financial need. The mayors of Istanbul and Ankara announced they were opening up municipality guest houses to students.

But according to the government, this is all just political posturing. “The majority of the protesters are not even students,” said Interior Minister Suleyman Soylu. “Those who are students have never applied for dorms.” Those who did were “professional provocateurs,” he told the official Anatolia News Agency. He accused them of being affiliated with various terrorist groups and the LGBT movement.

Sengul brushed aside the claims. “This is a genuine movement because there is a real problem,” she said. “We may have political views, but we do not represent any political party.”

Like the Gezi Park protests eight years ago and the ongoing Bogazici University protests, humor has been part of the students’ toolbox and inspiration to humor magazines. "Uykusuz," the satirical weekly, featured a familiar character who symbolizes state authority, angrily shouting at the camping students “Congratulations, you have caused the dollar to rise again.” "Leman," another satirical magazine, issued a special “Those Without Shelter” issue in which it shows a student using the sky as an eiderdown.

In a show of support from the music sector, artist Ozan Cobanoglu composed a song for the protesters. Lyrics included, “We are thousands who cannot shelter/ Our poverty’s due to your wealth/We know how to share and how to fight/ No wonder you are scared of our light.”

“I wrote this when I heard of the demonstrators detained by the police,” Cobanoglu told Al-Monitor. “I have a 1-month-old daughter and I was touched because I felt the students were taking a stand for her future too."