Reports say that dozens of masked settlers came to the cave-hamlet Khirbat al-Mufaqara, throwing stones at residents and breaking windows and cars. 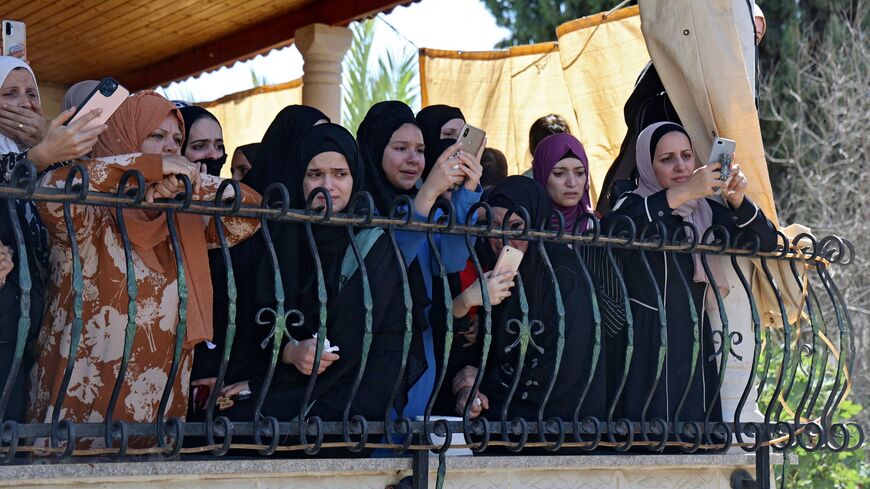 Relatives mourn during the funeral of Osama Sobh, a Palestinian man killed by Israeli soldiers during clashes near Jenin, in the village of Burqin in the West Bank on Sept. 26, 2021. - Photo by JAAFAR ASHTIYEH/AFP via Getty Images

In an especially violent incident, dozens of masked Israeli settlers entered the small West Bank Palestinian shepherding camp Khirbat al-Mufaqara on Sept. 28. Reportedly, the settlers threw stones at the residents, smashed cars, damaged water tanks and injured at least twelve people, including a three-year-old boy. The injured toddler, Mohammad Bakr Hussein, was reportedly hit in the head by a stone hurled by an Israeli settler as he slept in his house. He was evacuated to the Soroka Medical Center in Beersheba in moderate condition.

Apparently, the incident took place after settlers attacked a Palestinian shepherd from the small village. Other Palestinians then arrived on the scene to push back the settlers, prompting the arrival of more settlers from nearby outposts. The Palestinian hamlet is located between two illegal Israeli West Bank outposts - Avigayil and Havat Maon. The settlers apparently came from these outposts.

Three Israelis were also injured in the clashes that erupted. One Palestinian man and one Israeli settler were arrested by Israeli troops who arrived at the scene. According to a police spokesperson, the Palestinian man is suspected of attacking a soldier; the Israeli is believed to have thrown stones and disobeyed soldiers’ instructions.

Basil al-Adra, who lives in a village nearby, said, “It must have been around 100 settlers, from all the outposts near al-Mufaqara. They smashed windows, punctured car tires, entered homes. And they injured a child as they hurled stones into his home.”  Al-Adra recounted that the settlers went from one house to another, using knives and hammers to break windows. As they went into the homes, some of the residents fled, terrified.

Hebron Hills council head Yochai Damari said in a statement that the Israelis who had engaged in the clashes were guests, not local residents, who claimed stones were thrown at them while driving nearby. “Our way is not violence. Not against soldiers and not against Arabs,” said Damari.

Khirbat al-Mufaqara is one of 12 hamlets in an area called Masafer Yatta in the South Hebron Hills region. In the early 1980s, the IDF declared the area a restricted military zone. At the time, dozens of Palestinian families lived there, in natural or man-made caves. Some lived in the small villages all year round, while others stayed there only seasonally, earning a living as farmers and shepherds. For the past two decades, Israeli authorities have been trying to expel the residents from their homes, on the ground of living illegally in IDF fire zones. Residents and human rights groups have been petitioning for years against demolition orders. Still, dozens of structures have been demolished.

The leftwing Meretz party tweeted after the Sept. 28 incident, “Settler violence is breaking records. Dozens of masked settlers attacked Palestinians, broke windows, entered houses. A 3-year-old Palestinian boy is hospitalized in moderate condition. If it was the other way around, the whole country would be engaged in it, but settlers are allowed. We will stop this violence.”

Tensions have increased in recent days also in other parts of the West Bank. On Sept. 26, five Palestinian gunmen were killed by IDF fire, in clashes that erupted in the West Bank town of Bidu, not far from Jerusalem. Reportedly, IDF raided the village in an attempt to arrest operatives of a Hamas cell, who were planning terror attacks in Jerusalem. After the first raid, Israeli security forces carried out further operations, aiming to disrupt the alleged plans for major terror attacks. In one of these operations, the soldiers discovered a significant cache of explosive devices. Israeli press says the IDF continues to investigate the Hamas cell and look for more caches.