The joint letter with 145 signatories called on the UN Human Rights Council to heed the call of survivors and launch an independent, international probe of the blast. 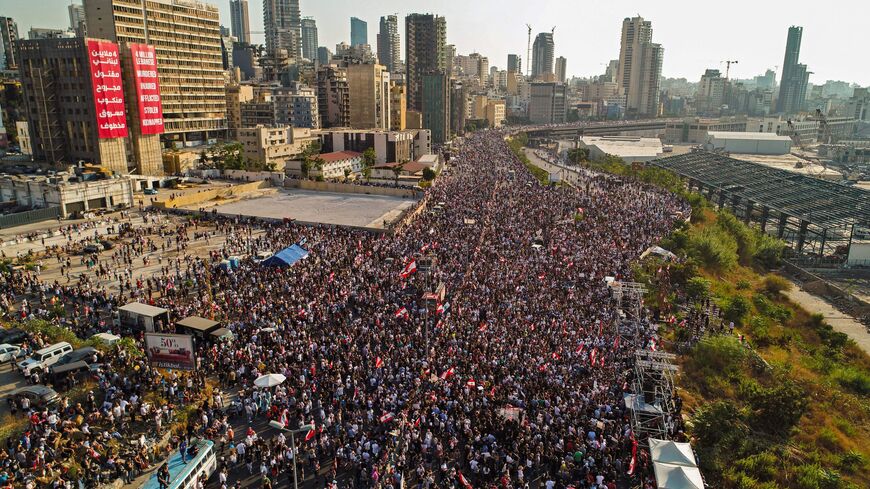 This picture taken on August 4, 2021 shows an aerial view of demonstrators gathered outside the port of Lebanon's capital Beirut on the first anniversary of the blast that ravaged the port and the city. - KAMEEL RAYES/AFP via Getty Images

More than a year after the blast at Beirut’s port, Lebanese and international rights groups, survivors and family members reiterated their call for the United Nations Human Rights Council to establish an independent investigation into the explosion that killed more than 200 people.

“No one has been held accountable,” the 145 signatories said in a joint letter published Wednesday. “It is now time for the Human Rights Council to step in, heeding the calls of the survivors, families of the victims, and the Lebanese people for accountability, the rule of law, and protection of human rights.” A similar letter was sent by 115 rights groups, survivors and families in June.

The August 2020 blast at Lebanon’s most vital port killed at least 215 people, injured over 6,500 and displaced more than 300,000 from their homes. Much of the Lebanese capital was harmed by the accident, which caused billions in damage and added to the small Mediterranean country’s dire economic situation.

“The families of the victims and survivors of the catastrophic Beirut blast are appealing once again to the Human Rights Council to urgently establish an investigative mission looking into the Lebanese state’s failure to protect their rights,” said Aya Majzoub, Lebanon researcher at Human Rights Watch.

“More than a year after the explosion, Lebanese leaders continue to obstruct, delay, and undermine the domestic investigation,” Majzoub said in a statement.

Last month, an investigation from Human Rights Watch concluded that senior Lebanese officials knew about and did nothing to prevent the risks associated with the stockpile of ammonium nitrate that caused the explosion. Lebanon’s leaders have vowed to investigate the blast, but those efforts have stalled, according to rights groups, because of lack of judicial independence and fair trial violations.

In February, a court removed the investigating judge, Fadi Sawan, after two former ministers whom he had accused of criminal negligence filed a complaint against him. His replacement, Judge Tarek Bitar, has also struggled to prosecute the case, in part because authorities in Beirut haven’t lifted the immunity for former ministers and members of parliament.

The signatories of the joint letter on Wednesday, which included Amnesty International and Human Rights Watch, said an international investigation would assist, rather than impede, the ongoing domestic probe.

“Establishing the truth of what happened on August 4, 2020, is a cornerstone to redress and rebuild after the devastation of that day,” the letter said.