Hayat Tahrir al-Sham has banned the pro-opposition Orient News channel from media coverage in Idlib, raising fears about the state of press freedom in Syria’s Idlib. 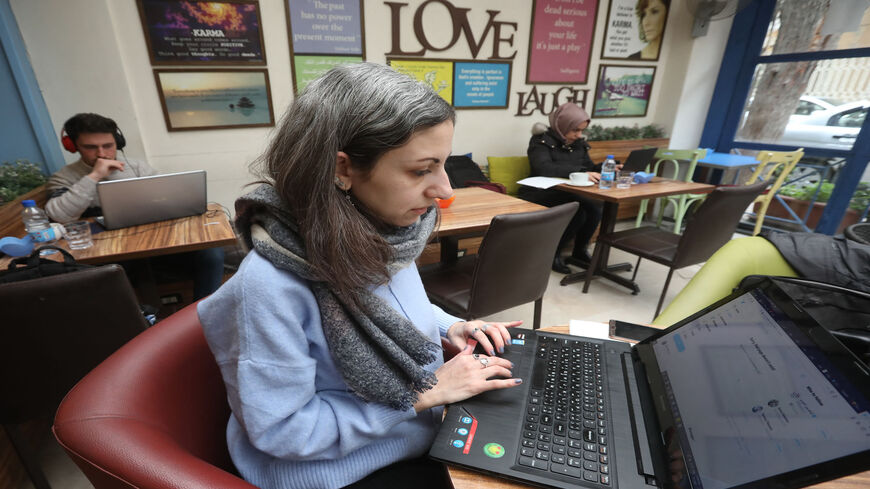 Orient News channel said HTS had informed its correspondents in Idlib that they are no longer allowed to practice journalistic work in the areas under its control in northwestern Syrian, under the pretext of “professional violations.”

A number of Orient News employees in Idlib who spoke to Al-Monitor said that HTS has instructed them to stop working for the channel. They were told they can work as journalists and reporters, but without using the Orient News channel logo.

Activists and journalists in Idlib have condemned HTS’ decision. Many see the ban as an infringement on media freedom and a restriction on the work of journalists and activists in the area.

Other activists supported the ban. They believe Orient News channel no longer represents the revolution and has rather become a platform for bashing the opposition factions that represent the revolution and fight the Syrian government. They argue that the channel had described the revolutionary factions as “militias,” a term used by the government to label the factions. This turned Orient News, according to these activists, into a tool that serves the Syrian government and Russian propaganda portraying the factions as made up of militias and mercenaries.

The Syrian Network for Human Rights (SNHR) condemned the decision taken by HTS against the Orient News channel. In an Aug. 25 statement, it stressed the “need to provide for media workers and centers given their vital role in disseminating information.”

It further said that media workers should be “allowed to work freely, and the policy of threats, persecution and imposition of bans on media personnel must be ended.”

SNHR urged HTS “to respect the freedom of media work stipulated in the Universal Declaration of Human Rights, to allow the entry of all media outlets, to stop controlling the work of journalists based on their loyalty to the controlling party and to rescind all security decisions that suppress freedom of opinion and expression.”

It further noted that HTS “is adopting a policy of restricting media outlets and their personnel in the areas under its control, whom the group accuses of posing a threat to its extremist ideology and approach, which recently led many to give up their work or to be displaced.”

A source close to HTS told Al-Monitor that Orient News channel’s offices are still open, its correspondents are still present and working with ease in HTS areas with no one bothering them. The source confirmed that Orient News had insulted the revolution and the revolutionaries by calling them “militias,” which is an “ugly” description often repeated by the government.

“This goes against Orient News channel’s inclination as pro-revolution. The channel ought to be a spokesperson for the revolution and express its ideas,” the source added.

Ahmad Barbour, an activist who works as a technician for Orient News channel and lives in Idlib, told Al-Monitor, “The factions' resentment of Orient channel is not new. This happens every time the channel exposes the mistakes of a faction in public, especially when a particular faction is named. This is what happened with HTS. The group has prevented Orient channel on several occasions from working in several areas for highlighting HTS’ mistakes. HTS has repeatedly accused the channel of implementing external agendas that harm the revolution.”

He said, “Banning the media from speaking up about the people's issues and conveying their voice is a restriction on media freedom. Orient channel has criticized the factions, especially those present in Idlib, after residents in the area complained about [the factions’ practices]. The channel gathered several posts and videos from the locals revealing injustice, corruption and nepotism. This angered HTS.”

Barbour noted that the United Arab Emirates (UAE), from where Orient News channel was broadcasting previously, had no role in the channel’s content. “The channel is currently broadcasting from Turkey. It carries the appeals of the people inside Syria,” he added.

Orient News channel newsroom Editor-in-Chief Alaa Farhat, who lives in Turkey, told Al-Monitor via WhatsApp, “HTS has banned us from working in Idlib to protest against our use of professional and legal labels to describe military formations in the province.”

He said, “It is known that the term ‘militia’ applies to every military group that is not affiliated with an internationally recognized government. We use this description to label HTS, especially with the exacerbation of violations against civilians in the area. This is why they accused us of being biased to the UAE against the Syrian revolution. This is a false allegation.”

He argued that the channel has been exposing the military factions’ transgressions and violations and their restrictions against civilians, and that the factions saw this as falling in line with the policy of the government and Russia to demonize them.

“We criticize all the factions that commit transgressions and violations and we condemn their militia-like behavior and their use of the force of arms without any deterrence or accountability,” Farhat said.

Syrian journalist Mustafa al-Noaymi, who resides in the northern countryside of Aleppo, which is under the control of Turkish-backed factions, told Al-Monitor, “Repressing the media in general does not serve the Syrian cause. It would have been more useful to communicate with Orient News channel and seek a specific compromise, starting with a consensus over the label to be used to describe the military factions that run the area, without calling them militias. Media outlets that break the revolutionary norms, laws and customs should be informed and [verbally] warned [before any decision is taken against them]. Their correspondents should not be banned from covering news in Idlib province.”

He added, “Syrians fear increasing pressure on the media, which will restrict the activity of media professionals in Idlib. This may push some media outlets out of the province, leaving it without media coverage. Only some amateur journalists would be able to stay, and they may not be able to convey their messages to the international community.”