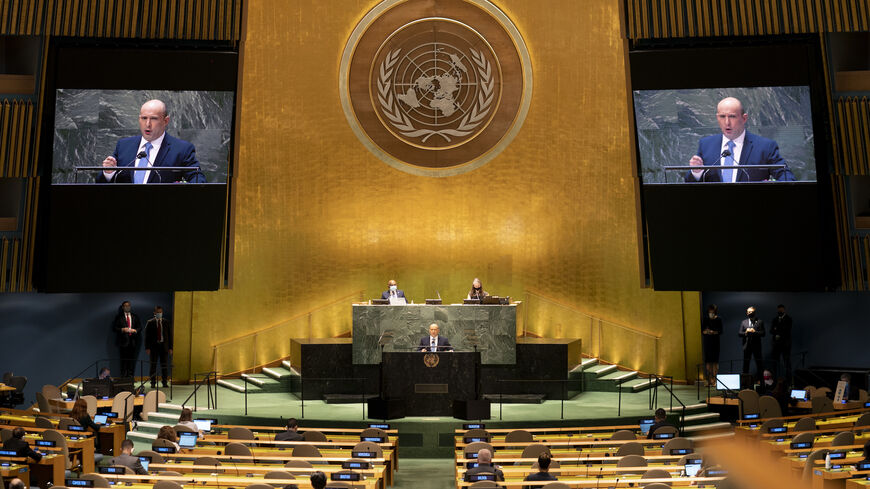 A complex task awaited Prime Minister Naftali Bennett in preparing his maiden speech to the UN General Assembly on Sept. 27, his first appearance on the international stage since taking office in June. One could describe it as a paradoxical task: Bennett was supposed to be as much as possible like his predecessor, Benjamin Netanyahu, but at the same time as little as possible like Netanyahu’s controversial alter ego “Bibi”. He had to step into the gigantic shoes of Netanyahu's impassioned fire-and-brimstone speeches to the UN, but to forego the childish gimmicks, boastful threats, and  antagonism that he generated among many.

One of Netanyahu’s most impressive strong points was (is) his rhetorical ability and charisma, as expressed in international speeches that, to many Israelis, positioned him as a perfect orator and English-language wordsmith, and the most effective advocate the people of Israel have had in 3,000 years. Without exaggeration.

In that sense, Bennett survived the challenge and emerged unscathed. No, he was not Netanyahu, but he was good enough. His English is as polished as his predecessor’s. Unlike Netanyahu, Bennett struck a businesslike and calm tone. Not too arrogant, leaving out unnecessary pathos and gimmicks. He came to speak with the world, not to preach at it, without tricks or shticks. It worked.

Bennett cleaned up the jarring background noise that accompanied his predecessor’s appearances. He avoided mentioning the Holocaust, for example. He threatened Iran one time only, and even then, the threat was implied, without Netanyahu’s saber-rattling and nose-thumbing. Most interesting was his approach to the US. It is unclear whether the Americans were aware of their part in the deal or whether it was an independent Israeli initiative. Either way, Bennett intentionally avoided mentioning two burning issues: The conflict with the Palestinians and US negotiations on a return to the nuclear agreement with Iran.

“We promised the Americans not to launch a public campaign against their efforts to return to the nuclear agreement,” one of the Prime Minister’s associates told Al-Monitor on condition of anonymity. “And we have no intention of violating this promise. That was why the Prime Minister did not talk about these efforts, although the Americans, like the rest of the world, are very familiar with our views on the matter.” Bennett believes blustery condemnations will not change anything. Better to win immediate points for gentlemanly behavior.

On the other hand, as mentioned, Bennett ignored the Palestinian issue, as if it did not exist. True, the Americans know as well as Bennett and Palestinian President Mahmoud Abbas that prospects of renewing substantive diplomatic negotiations in the coming years are very similar to prospects that the Islamic Jihad will lay down its arms and convert to Judaism. On the other hand, it is unclear why Bennett did not even offer up some fairly noncontroversial and consensual language about making a shared effort to limit the conflict, reduce tensions, upgrade Palestinian standards of living and deepen cooperation between the sides. Such comments would have probably survived the scrutiny of his multiparty coalition and brought a smile to the face of the Americans.

On Iran, Bennett cannot afford to lag behind Netanyahu waiting in the wings to bring him down. So the Holocaust was left out, wisely. Israel in 2021 is a regional power, believed to have considerable nuclear capability. It does not face an existential threat. Bennett focused instead on Iran’s newly installed President Ebrahim Raisi, using his favorite nickname “hangman of Tehran”, revealing intelligence about droves of deadly UAVs with which Iran will soon arm its many allies and proxies in the Middle East, including those in Syria and Yemen.

Bennett opted for quiet threats rather than bluster: “Iran’s nuclear program has hit a watershed moment. And so has our tolerance,” he said, implying criticism of dangerous insouciance from the EU, China and Russia toward the Iranian threat. “There are those in the world who seem to view Iran’s pursuit of nuclear weapons as an inevitable reality, or they’ve just become tired of hearing about it,” Bennett added. “Israel doesn’t have that privilege. We will not tire. We will not allow Iran to acquire a nuclear weapon.”

Bennett then went on to issue veiled threats. “Iran is much weaker, much more vulnerable than it seems. Its economy is sinking, its regime is rotten and divorced from the younger generation, its corrupt government fails to even bring water to large parts of the country. The weaker they are, the more extreme they go. If we put our heads to it, if we’re serious about stopping it, if we use all our resourcefulness, we can prevail. And that’s what we’re going to do.”

Iran’s domestic weakness and its limited conventional capabilities make it vulnerable, Bennett was hinting. He may have been thinking of his past position (as mentioned here in previous articles) when he served in Netanyahu’s government about the need to exact an immediate price from Iran for every terror attack against Israel or Israeli interests.

All in all, Bennett can pat himself on the back and add the speech to his modest list of achievements. The messages to Iran were delivered, but most of the speech was to convince the audience back home that a prime minister whose name is not Benjamin Netanyahu addressed the UN and the earth kept revolving and the sun kept shining. Assuming the sun continues to perform as expected, he can now move on.