Iran is hoping to expand its economic ties after it enters the Shanghai Cooperation Organization. 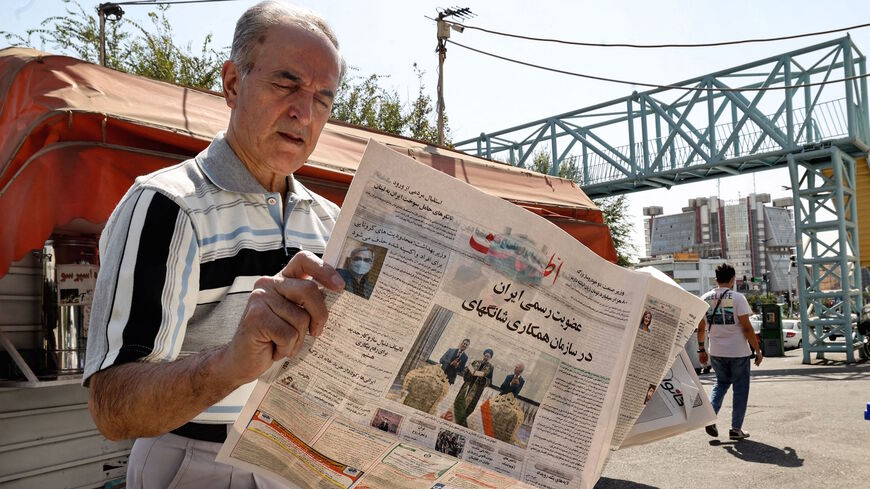 An Iranian man reads a copy of the daily newspaper "Etalaat" bearing the headline "Iran is a new member of the Shanghai Cooperation Organization" at a kiosk in the capital, Tehran, on Sept. 18, 2021. - ATTA KENARE/AFP via Getty Images

Iran has finally begun the formal process to become a member of the Shanghai Cooperation Organization (SCO). The process, which will take up to two years, is in line with President Ebrahim Raisi’s goal of improving ties with neighboring countries. Iran has had observer status in the Asian security body led by Russia and China for 15 years, and it hopes membership will improve the country’s economy.

After arriving from Tajikistan, where the summit was held during which Iran’s membership was approved, Raisi ordered Iran’s ministries to prepare reports on their abilities for cooperation with the SCO. “Today, not just the Foreign Ministry but all of the ministries have a responsibility to make the most of the country’s economic prosperity from the opportunities provided,” Raisi said Sept. 19.

Raisi said the member states of the SCO are all ready to expand economic ties with Iran and Iranian ministries must be ready for this. One important area of growth Raisi mentioned was the Chabahar port in southeast Iran on the Gulf of Oman. He said the port, which is being financed and built with India, could be a “gateway to Asia and the world.”

The Chabahar port could serve as an entry into Central Asia for India through the land on a path that would avoid Pakistan, something that India is particularly keen on. The port had been plagued by delays and problems between Iran and India.

In addition to improving trade relations with India, Iran is hoping to expand economic ties with China and Russia, two other large economies within the SCO. However, there are still issues concerning US sanctions, which limit Iran’s ability to conduct banking transactions and sell its oil.

An article in Fars News Agency argued that one of the issues Iran was facing with Western countries is that those country’s economies did not rely on Iran to operate; therefore, it was not difficult for them to cut ties with Iran once the United States exited the Joint Comprehensive Plan of Action and reapplied sanctions. The article argued that, with members of the SCO, there is potential for both sides to become linked and dependent on each other, forcing solutions that would evade US sanctions.

The article, citing the former head of Iran’s National Petrochemical Company, Abdulhussein Bayat, said that during the peak of sanctions Iran was still exporting petrochemical products to India and China. Bayat conceded that sanctions could make it more difficult for Iran to establish economic links with SCO countries but noted there are solutions.

Iranian officials have praised the new SCO membership. Mohammad Reza Mirtajaldin, a member of Iran’s parliament, called Tehran's membership into the SCO “a great achievement.” He said it was something the country has wanted for nearly two decades, and with the incoming administration of Raisi and his team, it came to fruition. Iran’s Foreign Ministry spokesperson Saeed Khatibzadeh called Iran’s membership into the SCO “the operational end of the project of Iran’s isolation by America.”