Nour Emam has launched an initiative to raise awareness on sexual education and reproductive health in Egypt at a time when sexual culture in Egypt and other Arab countries remains limited. 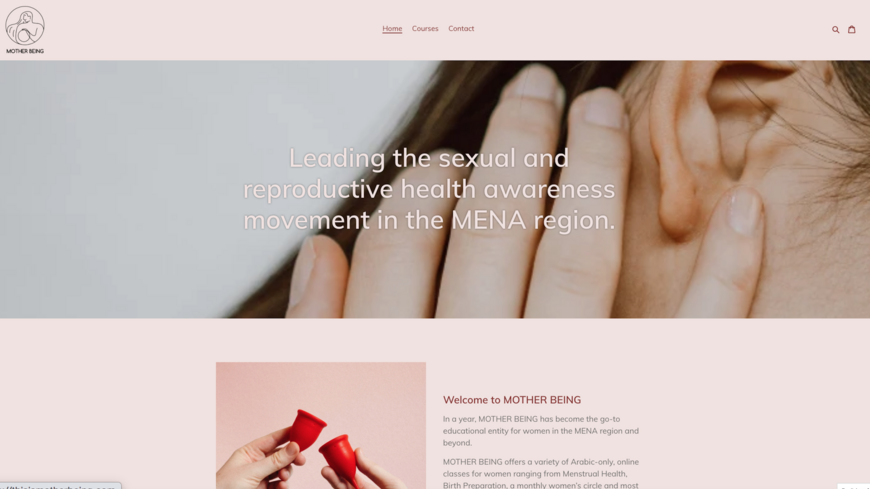 A screenshot from “Mother Being" — an online platform launched by Egyptian activist Nour Emam to educate women in Egypt and the Arab world. -

CAIRO — Although talking about sexual health remains taboo in many Arab countries, including Egypt, Egyptian activist Nour Emam is working to educate women in Egypt and the Arab world through an online platform titled “Mother Being.”

The platform aims to educate women and men about sexual and reproductive health. At the beginning of this year, Emam started providing labor support to women, but she soon launched an online educational platform that tackles topics related to sexual education. Most recently in September, the platform launched an educational course dealing with sexual awareness focused on pleasure.

On its Facebook page, Emam publishes topics related to fertility, pregnancy, childbirth and postpartum support. It also teaches parents-to-be how to prepare, trust, support and listen to the reproductive journey.

The platform also offers a range of women-only educational sessions that address menstruation, childbirth and sexual awareness focused on pleasure.

Emam works at a hospital as a doula to help women before and during childbirth. She had joined a five-month online doula training program from Canada, then another training program in postpartum depression management from a British university.

She told Al-Monitor that she decided to launch the initiative to help herself and other women after her postpartum depression almost led her to commit suicide.

After starting her work as a doula, Emam decided to expand her platform and training to also include sexual education in general, and not only the period of pregnancy and childbirth.

The Egyptian activist stressed that she double-checks everything published in her social media videos for fear of being sued for spreading false information.

Emam believes that many people can’t find reliable information about sexual and reproductive health. She added that even parents do not talk to their children about such topics.

So far, Emam said, “People’s reaction to my content was above and beyond.” She stressed the importance of raising sexual awareness among both men and women, since men account for half of society.

Jamal Farwez, a consultant psychiatrist at the Military Medical Academy in Cairo, supports the awareness initiatives and stressed that sexual education reduces sexual disorders and harassment.

Farwez believes that awareness initiatives raise awareness of harassment attempts, so that girls can protect themselves. He stressed that sexual education must be taught in school curricula from childhood on, so that children can learn about their bodies and the changes that occur as they grow up.

There is controversy in Egypt and the Arab and Islamic countries surrounding sexual education, because many people view sex as an innate and instinctive matter that does not require study or education. Farwez dismissed that idea that sexual culture is innate, and stressed the need to teach it.

Sweden-based Jordanian Islamic preacher Fikri al-Miskawi said in 2018 that “sexual matters and relations are innate and known to people, but what needs to be covered is the ethics of such relations. The Islamic Sharia has dealt with these in the context of teachings related to family jurisprudence.”